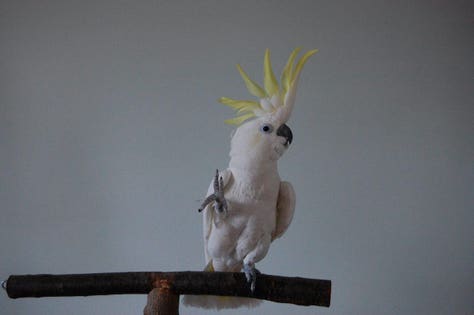 More than a decade ago, a medium sulfur-crested (eleonora) cockatoo, Cacatua galerita eleonora, named Snowball became an overnight sensation after he was spotted on YouTube energetically dancing to the beat of the Backstreet Boys’ “Everybody”. Another YouTube video from 2007 captured the 12-year-old cockatoo boogieing to Queen’s “Another One Bites The Dust.”

One of those millions of mesmerized viewers was cognitive neuroscientist Aniruddh Patel, a Professor of Psychology at Tufts University, where he investigates how animals process music, as a way to study the evolution of musicality in people. Professor Patel was a Senior Fellow at the Neurosciences Institute a decade ago when he first saw and studied Snowball.

That study was notable in part because it showed that a cockatoo naturally does what people can do — dance — a behavior that even our closest relatives, chimpanzees and the other great apes, cannot do.

“In 2009 we published a study of Snowball [ref] showing he spontaneously synchronized his movements to the beat of music, something seen in every human culture but which had never been observed in a non-human animal,” Professor Patel explained in email.

But Snowball was doing more than simply relying on his original dance moves. He apparently was a bit of a dance experimentalist.

“After that study we noticed him doing new movements to music that we hadn’t seen before,” Professor Patel added.

Study co-author, Irena Schulz, CEO of Bird Lovers Only Rescue Service Inc, who lives with Snowball, first reported to her collaborators in 2008 that Snowball appeared to be in a period of ‘movement exploration’. During this exploratory period, Snowball seemed to prefer movement diversity over synchronization accuracy: his rhythmic movements often were not highly synchronized to the beat, possibly because he was exploring new movements rather than exploiting old ones.

To further quantify these diverse new movements, Professor Patel and his collaborators filmed Snowball dancing to two classic rock and roll hits from the 1980s: “Another One Bites the Dust” and Cyndi Lauper’s “Girls Just Want to Have Fun.” During filming, Ms. Schulz was in the room, occasionally shouting “good boy,” but Snowball was the only one dancing. The research team played the two tunes three times each for a total of 23 minutes.

The lead author of the study, cognitive neuroscientist R. Joanne Jao Keehn, a Research Assistant Professor in psychology at San Diego State University who is a classically and contemporarily trained dancer, muted the sound and analyzed Snowball’s movements frame-by-frame in the new videos. She focused on each dance movement or sequence of repeated movements and specifically described each one.

“What’s most interesting to us is the sheer diversity of his movements to music,” Professor Patel said. He noted that Snowball invented his dance moves on his own and without any training. These new dance moves were more embellished than the head bobbing and foot lifting they’d seen before.

Indeed, the new videos confirmed that Snowball was responding to the music with diverse and seemingly spontaneous movements using various parts of his body.

The team noted that Snowball’s dance movements were clearly intentional, but weren’t an efficient means for him to achieve any plausible external goal.

“We found preliminary evidence that Snowball dances differently to the two different songs, but we would need to collect more data to confirm this,” Professor Patel added in email.

Were these differences a sign of Snowball’s behavioral flexibility — and perhaps even his creativity?

Why does Snowball dance?

Snowball’s dancing isn’t unique — other cockatoos, and indeed, a number of other parrot species dance too. But because dancing is not useful to a wild cockatoo, it’s probably an evolutionary consequence of something else — something that’s common to humans and cockatoos, but is not shared by humans and great apes. Further, the human ability to keep time with music may also be an evolutionary byproduct. But what?

“Our findings suggest that dancing to music isn’t an arbitrary product of human culture but a response to music that arises when certain cognitive and neural capacities come together in animal brains,” Professor Patel said in email.

The researchers propose that the reason humans and parrots share a natural ability to dance may arise from the convergence of five capacities:

Indeed, dancing is a form of social interaction for humans: people dance with other people more often than they dance alone. Is this also true for cockatoos?

The preliminary data are suggestive. The research team did notice an important difference between Snowball’s dancing and human dancing: Snowball danced in short bouts rather than continuously (average duration = 3.69 seconds), which is consistent with earlier reports (ref). However, consistent with the idea that dancing has a social function, Ms. Schulz reported that Snowball moves continuously when a human dances with him.

Professor Patel says the team are currently analyzing data from an experiment designed to find out whether dance may have a social or communicative function for Snowball, too.

Snowball The Dancing Cockatoo by Sy Montgomery. (My review.)