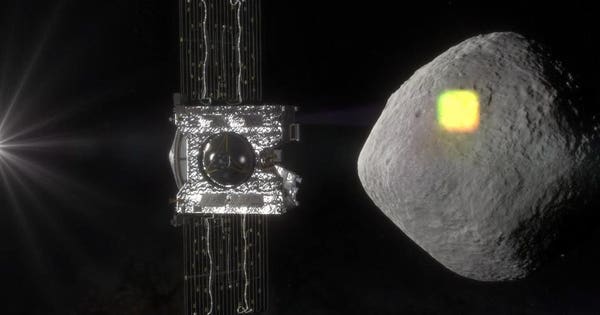 Two different spacecraft from NASA and JAXA (the national space agency of Japan) are currently preparing to swipe a hunk of two different asteroids that they’ve been journeying toward for the past few years. The asteroids, named Bennu and Ryugu respectively, could also be among the most profitable to mine for resources at some point in the future.

NASA’s OSIRIS-REx mission has spent the past two years traveling to Bennu, which is considered a potentially hazardous asteroid with a tiny chance of hitting earth late in the 22nd century. Meanwhile, JAXA’s Hayabusa-2 mission has already arrived at Ryugu, where it has deployed a few mini robot probes to the surface for an initial look around.

A central objective of both missions is to take a small sample of each space rock that will then be returned to Earth for analysis in the 2020s.  Scientists hope that taking a close look at the composition of the asteroids could provide insights into the origins of the solar system, but they also contain plenty of valuable water, organics and precious metals.

“In the future, these asteroids may one day fuel the exploration of the solar system by robotic and manned spacecraft,” reads NASA’s overview of the OSIRIS-REx mission.

Indeed, Ryugu tops a list of asteroids estimated to be the most cost-effective to mine.

According to the database maintained on the site Asterank  (which was acquired by space mining startup Planetary Resources), Ryugu could be made up of nickel, iron, cobalt, water, nitrogen and ammonia valued at a total of $82.76 billion. After accounting for the cost of getting there and setting up mining operations, the site estimates the floating rock could generate over $30 billion in profits.

Bennu, which is thought to be composed primarily of iron, is number five in terms of cost effectiveness to mine but would likely generate significantly less profit overall: it’s estimated to be worth about $670 million with the potential to generate $185 million in profits.

There are a number of far larger and more valuable asteroids out there worth trillions, but Asterank’s database estimates they’d take some serious investment to start mining compared to those on the most cost effective list.

Still, the huge caveat in all this speculation is that it’s based on some very preliminary estimates about what these asteroids are really made up of. Astronomers basically make educated guesses about their composition based on how they reflect sunlight.

To know what these asteroids are really made of, we’re going to need to check them out up close. Fortunately, that’s in process right now.