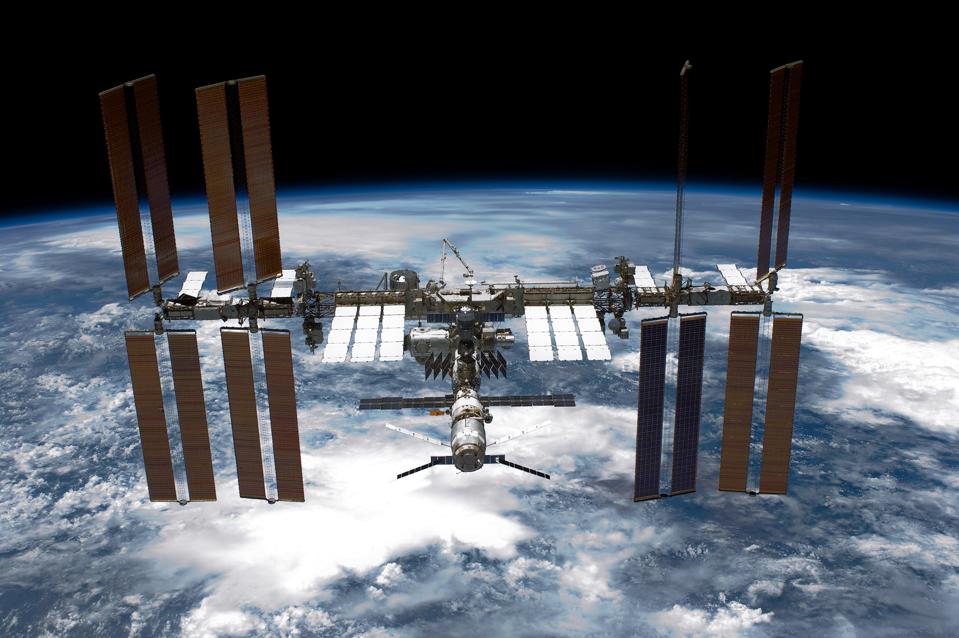 If there are two things I like, it’s particle physics and space, and a story that combines them is the best of both worlds.

Astronauts aboard the International Space Station (ISS) have been attempting to repair and refurbish a sophisticated particle detector designed to study electrically charged particles as they impact the apparatus, including rare antimatter. Called the Alpha Magnetic Spectrometer (AMS), it uses a strong magnetic field and a series of sophisticated detectors made of silicon to track the passage of electrically charged particles. Scientists use this information to study heavy nuclei and measure the amount of antimatter passing through space. AMS is made possible because of the efforts of over 500 scientists from more than 50 countries and it is jointly sponsored by the Department of Energy Office of Science and NASA.

AMS was launched in 2011, with an expected operational lifetime of perhaps ten years. AMS must be cooled to operate properly, and it has four cooling pumps to ensure the equipment is at the proper temperature, in spite of the very harsh temperature extremes of outer space. Only one pump is required, and the others are simply for backup. However, AMS lost a pump after only three years into operation, with a second pump failing a few months later. Something needed to be done.

AMS scientists and engineers embarked in a four year program to design changes that could be made to the equipment to ensure long and reliable operations.  The job was especially tricky for two reasons: AMS was not designed to be serviced and it is attached to the outside of the ISS. Any repairs would have to be done in a weightless, vacuum, environment by astronauts wearing bulky spacesuits and gloves that make it difficult to perform delicate tasks.

On November 2, a Cygnus cargo spacecraft brought the AMS repair equipment to the ISS for what is expected to be four spacewalks to repair the apparatus. The first of those spacewalks occurred on November 15 and the third occurred on December 2. The date of the fourth and final spacewalk is still to be determined.

AMS has already had a very exciting program. Perhaps the most interesting result is its study of the energy spectrum of positrons (e.g. antimatter electrons) impinging on the space station. Antimatter is the opposite of regular matter and, when it comes into contact with ordinary matter, it annihilates into energy. The flux of positrons is very low, so there is no danger to the space station, but studies of cosmic positrons are very helpful in understanding a variety of astronomical processes, like pulsars and supernovae that can make positrons both directly and indirectly. Of particular interest is the fact that AMS saw many more high energy positrons than were predicted. This led some astronomers to interpret the positron excess as coming from dark matter, a hypothesized form of matter that does not interact electromagnetically. This conjecture has not been confirmed, but it has certainly generated considerable interest within the research community.

In addition to observing positrons, AMS has observed other antimatter, including antiprotons and some antihelium nuclei. However, the experiment is able to detect more than antimatter. It can also study the flux of ordinary matter, from protons and electrons up to much heavier nuclei, including nuclear species as heavy as carbon and oxygen. Measurements of these heavy cosmic nuclei can help astronomers probe star formation, as well as the emission of heavy ions from stars.

Today’s operation appears to have been a success and scientists and engineers are evaluating the equipment. When the AMS apparatus has been fully refurbished, researchers will use this unique facility to continue their investigation into cosmic antimatter and heavy nuclei cosmic rays.

Raytheon, to replace OCX hardware by 2022 for $378 million
Gigantic dinosaur footprints are found on the roof of a cave
Plans are underway to build huge, floating offshore wind turbine in Europe
Birdsong and clear views: coronavirus lockdown clears Paris pollution
Coronavirus calls us to share more than ever. Here are 10 ways to get started