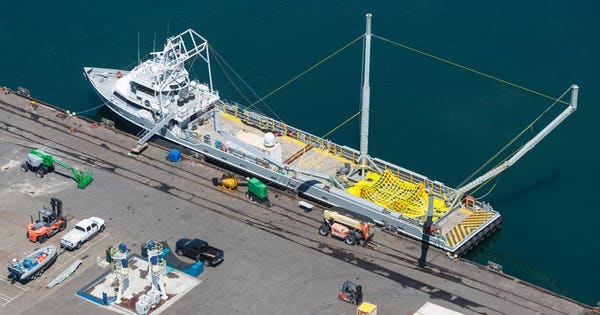 SpaceX’s Falcon Heavy launch overnight was a resounding success for a whole host of reasons – but the company also hit a key milestone in their continuing efforts to reuse their launch vehicles.

The mammoth rocket, boasting 5.1 million pounds of thrust from its 27 Merlin engines, lifted off at 2.30 A.M. Eastern time today, Tuesday, June 25, from Cape Canaveral in Florida in the company’s first-ever night launch. On board were 24 different satellites, each destined for different orbits in a major test flight for the US Air Force.

SpaceX also succeeded in landing the two side boosters of the rocket back at the launch site, although it wasn’t quite able to stick the landing of the center core far out into the Atlantic Ocean. However, CEO Elon Musk was quick to laud another key goal achieved by the rocket.

“Ms. Tree caught the Falcon fairing!!” he wrote on Twitter, surely one of the most bizarre sentences ever written.

Ms. Tree, in this case, is a recently renamed ship, which was previously called Mr. Steven (of course). Equipped with a giant net, this ship is designed to try and catch the nose cone of the rocket – called the fairing – as it descends to Earth via parachute, ready for use on another launch. The fairing protects the satellites on board as they head to space, before being jettisoned at high altitude and returning to Earth.

The captured fairing can be seen to the left of this image.

All previous efforts to collect it have failed, leaving the company to pick up the fairing from the ocean, where it has been damaged by saltwater. But with each fairing costing $6 million, the desire to catch them and reuse them is pretty plain to see.

The giant net on the boat is stretched across four angled beams, like a giant catcher’s mitt, and as the fairing drops to Earth it uses an onboard guidance system to find its way to the ship. The company has come oh-so-close on other launches, but they finally nailed it this time.

While one half of the fairing made it to the ship, the other half touched down in the water as planned for recovery. But the successful catch will be a key step towards SpaceX reusing as much of their rockets as possible. Only the upper stages at the moment are not reusable, dramatically lowering launch costs.

This morning’s Falcon Heavy launch will be lauded for a whole host of reasons, not least its perfect deployment of all its payloads into orbit. But for long-time SpaceX fans, the real treat is seeing a ship called Ms. Tree catch a large piece of metal that fell from the sky.