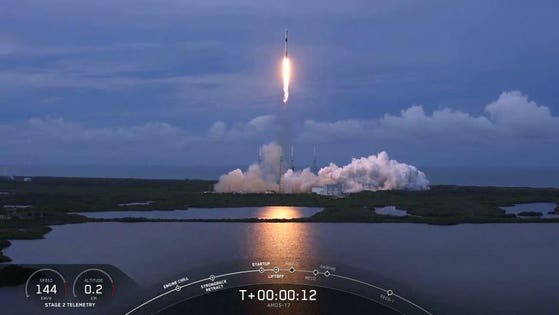 Weather almost hampered the launch but it cleared at the end.

SpaceX has successfully launched its tenth orbital rocket of the year, but in a rare event, the rocket was dropped into the ocean and was not recovered after the launch.

This is an advanced communications satellite built by Boeing that will head to geostationary orbit, where it will remain for 20 years to service the Middle East, Africa, and Europe. The satellite weighs in at 6,500 kilograms.

Because of the high orbit needed by the satellite, the first stage of the Falcon 9 rocket was not reused on the flight, as happens with most other rocket launches, and was instead dropped into the Atlantic Ocean. This first stage had previously flown before, however, in July 2018 when launching the Telstar 19 Vantage satellite and in November 2018 for the Es’hail 2 satellite.

SpaceX did say they would attempt to recover the fairing (nose cone) of the rocket, however, as they did earlier this year, so the entire rocket is not planned to be expendable. Regardless, it’s quite rare to see an expendable launch from SpaceX these days, a testament to their impressive development of reusability – something other companies are hoping to emulate.

SpaceX has several more launches planned this year, including a potential flight of its Crew Dragon vehicle with astronauts on board for the first time. However, pending an investigation into an explosion that destroyed its previous Crew Dragon vehicle, that flight may now take place in 2020 instead.