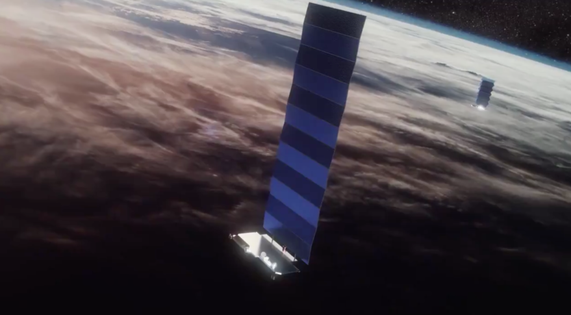 SpaceX launched its first 60 Starlink satellites in May this year.

Following yesterday’s near-miss between the European Space Agency’s (ESA) Aeolus satellite and SpaceX’s Starlink 44 satellite, the latter has clarified in a statement why it declined to move its satellite and left ESA to perform the manoeuvre.

In an emailed statement, SpaceX says that its Starlink team exchanged emails with ESA’s Aeolus operations team on August 28, when both had been alerted by the US military to a 1 in 50,000 collision risk between their two satellites 320 kilometers above Earth. That was below the 1 in 10,000 safety threshold for a manoeuvre, so both SpaceX and ESA told each other they wouldn’t move.

Two days later on August 30, however, updated data from ESA suggested that the risk was higher than 1 in 1,000 – up to 1 in 591 according to SpaceX. This meant that one of the satellites needed to be moved in order to avoid a collision. However, attempts by ESA to contact SpaceX were in vain, leading ESA to conclude it should move its own satellite, which it did in the morning on Monday, September 2.

According to SpaceX, a “bug in our on-call paging system prevented the Starlink operator from seeing the follow on correspondence on this probability increase”. Thus, despite attempts from ESA to contact SpaceX, the latter provided no further response. “SpaceX is still investigating the issue and will implement corrective actions,” the U.S. company added.

They noted that had they seen the correspondence from ESA, they “would have coordinated with ESA to determine best approach with their continuing with their maneuver or our performing a maneuver.” It’s unclear who would have moved in this instance, although best practice would suggest Starlink 44 – which occupied this orbital region nine months after Starlink – should have been the one to move.

Holger Krag, head of the Space Debris Office at ESA, had said yesterday that they were “not upset” with SpaceX’s lack of correspondence. However, considering that SpaceX plans to launch up to 12,000 Starlink satellites in the coming years, they wanted a more open dialogue to prevent incidents like this in the future.

It is unclear if the electric thruster onboard SpaceX’s Starlink 44 satellite would have been sufficient to actually maneuver the satellite given the short three-day warning before the collision risk. Moreover, it is not clear what SpaceX’s touted autonomous collision avoidance system – designed to avoid incidents like this – was supposed to do in this situation.

“It must be clear when you have such a situation who has to react,” said Krag, who noted that some sort of automated system will be necessary for upcoming mega constellations like Starlink. “It cannot be when we have 10,000 satellites in space that there are operators writing the email what to do.” (In this instance, it’s understood SpaceX’s correspondence was written by a human.)

SpaceX has not yet confirmed what the cause of the “bug” was, nor if they would have moved had they seen the correspondence. Many in the industry hope this will not set a precedent, however, where other operators are forced to evade satellites like Starlink on a regular basis.

For SpaceX, the whole episode is a missed opportunity for some positive PR to show they planned to operate responsibly in Earth orbit. With few rules or regulations in place on who should move in these incidents, current practice relies mostly on “goodwill”, according to Krag.