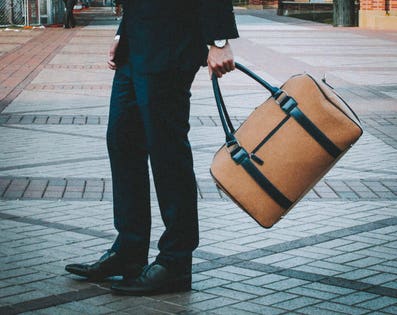 Plastic in the ocean needs to hit the road, take a trip, get out of town. A group of students at the University of Southern California Marshall School of Business have created a travel bag made of cork and recycled ocean plastic. Aka: The world’s first premium cork duffle suitcase.

The startup is called Mi Terro, a combination of Spanish and Portuguese which means My Earth. “I chose this name because most of the cork trees grow in Spain and Portugal,” says Robert Luo, Mi Terro CEO.

The travel bag, called the Mi Terro CDS (Cork Duffle Suitcase), was funded in less than 22 hours after its February launch on Kickstarter, and has backers in more than 20 countries.

About two pounds of recycled plastic is used to create each bag. The plastic comes to Mi Terro from an ocean cleaning and recycling agency in China, Luo says. One pound of plastic used for each bag comes from plastic harvested from the ocean (which shouldn’t be there in the first place).

The cork comes from the bark of cork oaks, and is lightweight, resilient and water resistant. It also can be harvested without cutting down the tree, according to the Marshall School of Business.

The ocean plastic is repurposed for the bag’s handles, zippers, lining and utility pockets.

Mi Terro will recycle and reuse your bag once you’re done with it. It should last a while, since you carry it on rather than check it.

“Our bags are ethically made in a Chinese factory where more than 50% of the workers are women,” the CEO adds. “All of them earn above industry fair wage. For every 50 bags we sell, we provide one additional job.”

The bag puts trees in the ground too.

“We partner with Eden Reforestation Products to plant 10 trees for every product sold,” according to Luo. More than 2,500 trees have been planted so far, in spots were deforestation is a problem, such as Indonesia, Nepal and Madagascar.

The bags can be pre-ordered for $275 on Mi Terro’s website (use the code “forbes50” for half off the retail price), Luo says. Orders are due to ship out in mid-July.

The bag has room for up to five day’s worth of clothes, according to its Kickstarter page, and 17 features, detailed in a video:

Luo has been a self-avowed environmentalist since childhood, and helped created the CDS because he wanted a bag that was sustainable and would give a kick in the pants to the fashion industry, one of most polluting in the world.

Physics in the pandemic: ‘During challenges, what you focus on matters a lot’ – Physics World
Sustaining sustainability: Lessons from the coronavirus pandemic
Diamond defects could boost the range of quantum cryptography – Physics World
Saudi Arabia’s big oil gamble will hurt the kingdom — but it’ll likely pay off
Loss of taste and smell key COVID-19 symptoms, app study finds