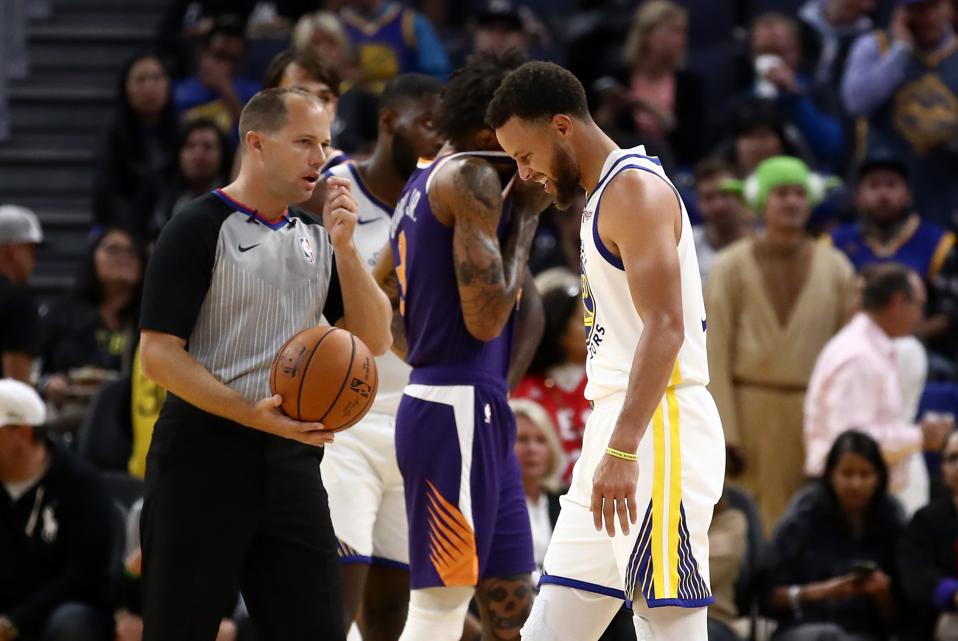 What’s been a bad season for the Golden State Warriors just got worse. The Warriors’ All-Star point guard Steph Curry took a tumble during Wednesday night’s game against the Phoenix Suns. The following result has left the Warriors in not such a golden state:

Here’s a press conference with Warriors’ Coach Steve Kerr that showed footage of the fall:

Curry’s injury will mean that three of the starters from last season’s Warriors team aren’t even playing right now. Warriors shooting guard Klay Thompson is out this season after tearing his ACL during last season’s Championship. Forward Kevin Durant, who is now with the Brooklyn Nets, has been sidelined with a torn Achilles tendon. The team that won Championships in two of the last three seasons is barely recognizable now. It’s a bit like the cast of television show E.R. in season 15 compared to the first six seasons.

A hand fracture is so meta. If Curry broke his hand that should mean that he fractured at least one of the five metacarpal bones that comprise his hand. The metacarpals are the bones that sit between your finger bones (phalanges) and your wrist bones (carpals). So when you high-five someone, you are actually high metacarpaling and phalanging someone, which is a bit more difficult to say.

The length of Curry’s absence will depend heavily on whether or not he gets surgery. If he doesn’t require surgery, he will probably wear a splint for about three weeks to hold his affected bones in place to allow them to heal properly. The goal is to immobilize his wrist, hand, and fingers so that the affected bones don’t move. As the National Library of Medicine indicates, in this case, if all goes as planned, Curry would be back on the court in six to eight weeks.

However, should imaging reveal that Curry’s metacarpal bones or any other structures in his hand are out of alignment then he may have to get surgery. A fracture won’t heal properly if the edges of the break are no longer touching each other. If anything in his hand is out of place, then surgery will be needed to put things back in place. Surgery is typically necessary too when bones stick out through the skin, because bones ain’t supposed to do that.

Surgery involves moving the bones back in place and making sure that they stay there. The surgeon may need to use pins, screws, plates to hold the bones together for a while. If you are going to get such surgery, makes sure that it is from someone who is actually trained as a hand surgeon and has enough experience. An oral surgeon would mean that you went to the wrong office. A sturgeon is a type of fish.

Not surprisingly, with surgery, recovery should take longer. The length that Curry will be out will depend on what needs to be fixed and how complex the procedure is. A more complex surgery could leave him sidelined for up to several months. According to ESPN’s Nick Friedell, doctors today will see the CT that Curry has already undergone and decide how to proceed.

Thus, the Warriors have been dealt a bad hand this season in more ways than one. Trying to figure out how the hand of fate works can be too meta and not as straightforward as a metacarpal injury. But Warriors fans certainly have had a lot to cheer about in recent years, and Curry should be back this season.

Physics in the pandemic: ‘Our habit of combining theory and experiments was an advantage for the lockdown’ – Physics World
In lean times, fierce dinosaur Allosaurus resorted to cannibalism
France aims to become Europe’s top producer of clean cars: Macron
Take lessons from cancer evolution to the clinic
Why the coronavirus might change dating forever