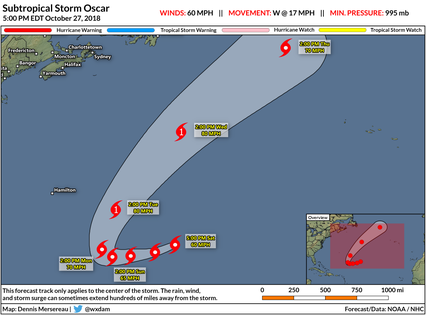 Subtropical Storm Oscar formed out in the middle of the Atlantic Ocean on Friday evening. The fifteenth named storm of the 2018 Atlantic hurricane season began its life like so many other storms this year—not purely tropical, but close enough that it counts. Forecasters expect the storm to eventually strengthen into a hurricane as it meanders through central Atlantic over the next week.

Oscar formed from a non-tropical low-pressure system that slowly began to acquire subtropical characteristics. A subtropical storm is a low-pressure system that isn’t fully tropical, meaning that its structure isn’t compact, it doesn’t have warm air throughout the storm, and it’s gathering some of its energy from upper-level winds. Subtropical storms in the Atlantic often transition over to fully-tropical entities if they remain over warmer waters, and that’s exactly what Oscar is expected to do in the next couple of days.

The latest forecast from the National Hurricane Center shows Subtropical Storm Oscar strengthening into a hurricane by the beginning of next week as it moves safely east of Bermuda. It’s likely that the remainder of the storm’s life will play out safely away from land in the central Atlantic Ocean, where it will pose no threat to anyone other than some ships traveling between the continents.