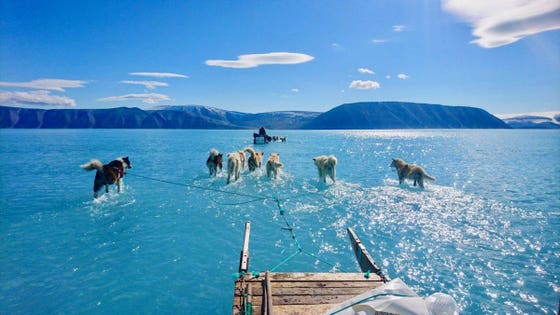 Just last week 4 trillion pounds of ice melted off Greenland in a single day. That very same day a viral image was taken that perfectly captures the current conditions on Greenland, sled dogs mushing through miles of meltwater.

The image was taken by Steffen Olsen, a researcher at the Centre for Ocean and Ice at the Danish Meteorological Institute, on June 13, 2019. Olsen was on a sled retrieving oceanographic moorings and weather station equipment in northwest Greenland as he found himself surrounded by a shallow sea of meltwater. As the ice below melts and refreezes it seals up cracks and causes the water to stand on top of the vast extent of ice.

The photo was taken at the Inglefield Fjord in northwestern Greenland, which empties into the Baffin Bay. Olsen and his team were on sea ice, which Olsen estimates is approximately 4 feet thick sitting over 2,850 feet of water. The researchers used teams of local hunters to help measure the ice thickness from the winter to summer months.

Climate researcher Ruth Mottram added that “the project Steffen is working on is in close collaboration with the local hunters in Qaanaaq (many people still live a traditional subsistence lifestyle in this region). They are monitoring sea ice and ocean conditions in Inglefield Bredning, close to the village of Qaanaaq and at DMI we now have quite a few years of data from this region. In the project, they place instruments on the sea ice that forms in the bay in winter each year and then retrieve them around about now in late spring/early summer before the sea ice breaks up, in order not to lose what are pretty expensive instruments into the ocean!”

The recent extreme melting on Greenland is attributed to two high-pressure systems over Greenland. One of the high-pressure systems is the same system that caused an extreme heat wave in the southeast United States in late May. The team of climate scientists make regular trips to the Inglefield Fjord where they measure temperature and melt conditions, however, this year’s melting early in the season has been unusually high.

As you can see in the figure above the NAO index (small box on the bottom left) has been significantly negative over the past couple months. This is an indication that Greenland has experienced unusually hot conditions given the time of year. This has led to significant melting across Greenland. The NAO index and its effects have been recorded for centuries, where people recorded unusually warm conditions in Denmark when Greenland was unusually cold and vice versa. This is a result of the NAO index and variation of low and high pressures from Greenland to western Europe.

The figure above shows the median and typical range of melting across Greenland from 1981 to 2010. Compare this to the red line which indicates melting in 2019 thus far. You will notice the sudden spike in melting associated with these high-pressure systems and unusually warm temperatures in the past weeks.

On the same day that the record melting occurred and the sled photo was taken the weather station at Qaanaaq airport measured a high temperature of nearly 60°F, unusually high for this time of year in northern Greenland.

With a general trend of increasing melting across Greenland during summer months, we can expect further sea level rise and a change in the habits of the people and animals that visit and live in and around the island. Greenland will likely experience a significant change in its environment over the coming decades.