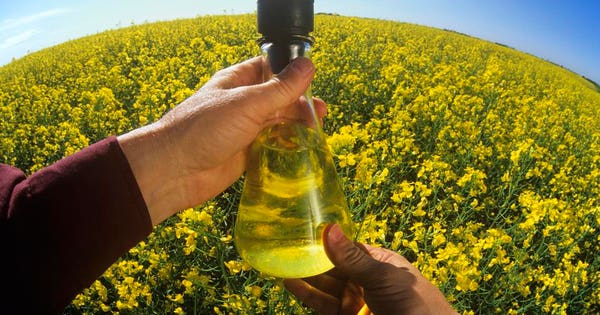 A new study, published in the journal The Plant Cell, could help guide new bioengineering approaches to encourage plants to produce higher levels of oil for biofuels and other oil-based products.

Previous research led by John Shanklin at the U.S. Department of Energy’s Brookhaven National Laboratory had shown that an enzyme known to be involved in sensing sugar levels in plant cells, directly interacts with another protein that helps drive the synthesis of plant oils.

“If you were a cell, you’d want to know if you should be making new compounds or breaking existing ones down,” he says. “Making oil is demanding; you want to make it when you have lots of energy — which in cells is measured by the amount of sugar available.”

He and his colleagues had discovered that, when sugar levels are low, an enzyme called KIN10 goes around adding a phosphate group (a small molecule containing phosphate) to a large number of different proteins.

When they took a closer look at which proteins received a phosphate group from KIN10, they found that one of them was the protein WRINKLED1. It’s kind of a master switch, responsible for turning on the genes needed for making oil. When KIN10 sticks a phosphate group on WRINKLED1, this sends a signal to the cell that WRINKLED1 is no longer needed and can be degraded. As WRINKLED1 gets broken down, oil production stops.

However, when sugar levels are high, this doesn’t happen. Now, the Brookhaven researchers have figured out why.

To track down the missing molecular pieces of the puzzle, Shanklin’s colleagues Zhiyang Zhai and Jantana Keereetaweep used a clever technique called microscale thermophoresis, which measures the strength of molecular interactions using heat and fluorescent dyes.

Molecules tend to drift along temperature gradients. The first observations of this go all the way back to the 1850s, and for a long time the effect was studied with regard to small inorganic molecules and polymers, but in recent years scientists realized it could be a useful way to track the behavior of larger biomolecules, too.

Quite simply, a molecule will gradually move from a warmer position toward a cooler position, but how quickly it does this depends on whether it’s moving alone or whether it’s dragging other molecules along with it.

“Jan and Zhiyang’s rapid application of this novel technique to this tough research problem was key to solving it,” he says.

They discovered a series of interactions that enabled them to gain a clearer picture of what was going on.

Firstly, it turns out KIN10 doesn’t work alone to tag WRINKLED1 with a phosphate group, it needs a partner: GRIK1. The researchers discovered that if GRIK1 is absent, KIN10 leaves WRINKLED1 alone.

They also discovered that KIN10 can also interact with another molecule called trehalose 6-phosphate (T6P). Interestingly, levels of T6P rise and fall in plants as sugar levels rise and fall. In other words, T6P is the means by which KIN10 can sense sugar levels in the plant.

“By measuring the interactions among many different molecules, we determined that the sugar-signaling molecule, T6P, binds with KIN10 and interferes with its interaction with a previously unidentified intermediate in this process, known as GRIK1, which is needed for KIN10 to tag WRINKLED1 for destruction. This explains how the signal affects the chain of events and leads to increased oil production,” says Shanklin.

As sugar levels increase, levels of T6P go up, too. This increases the likelihood that T6P will bump into KIN10. Importantly, when KIN10 and T6P hook up, it prevents KIN10 from working with GRIK1. As a result, WRINKLED1 gets left alone and continues to drive the production of oil.

However, as sugar levels fall, there’s not much T6P around anymore. This frees up KIN10 to team up with GRIK1, and together they clamp down on WRINKLED1 activity, and oil production decreases.

The researchers now want to get a detailed picture of how these proteins are interacting with one another. Fortunately, Shanklin and his team are in the perfect place to do this, as Brookhaven National Laboratory is home to the National Synchrotron Light Source II (NSLS-II).

In a synchrotron, electrons travelling at close to the speed of light do laps in a giant ring surrounded by powerful magnets. As the magnets force the electrons to curve with the ring, the electrons give off electromagnetic radiation in the form of X-rays. These incredibly bright X-rays can be focused into beams as narrow as one micron, and aimed at microscopic crystals of proteins. As the X-rays bounce off the atoms in the proteins, the resulting patterns of diffracted light can reveal exactly what those proteins look like at the atomic level.

Shanklin and his colleagues are looking forward to getting a close up picture of T6P binding with KIN10, which could inform them how to tweak that interaction in favor of higher oil production.