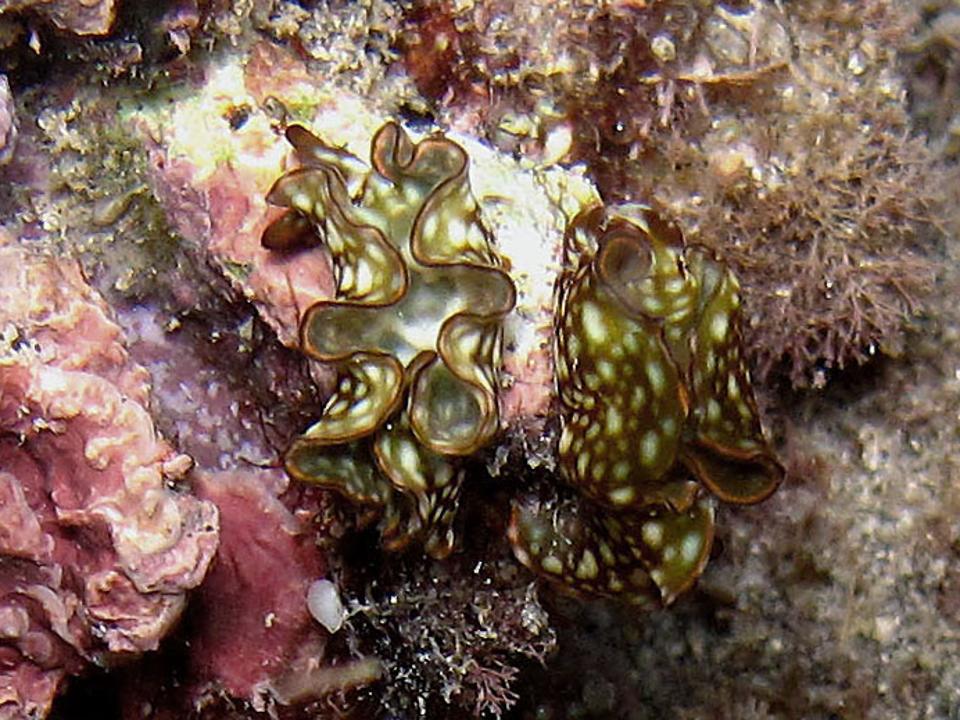 “Sacoglossans” are a family of “sap-sucking” sea slugs known for slurping up the innards of different kinds of algae. Consisting of nearly 300 unique species, Sacoglossans do not all use the algae the same way. While some simply digest the contents of the algae, others will sequester the algae’s photosynthetic organelles (chloroplasts) in their own tissues and continue to harvest the sun’s energy. Aside from some single-celled protists also known for stealing chloroplasts, these Sacoglossans are the only known animals to participate in this so-called “kleptoplasty“.

Elysia rufescens is an inch-long Sacoglossan that occurs throughout the tropical Pacific Ocean and grazes on tufts of Bryopsis, a green algae that harbors 15 different chemicals (kalahalides) to make it less palatable to prospective predators. However, Elysia is undeterred and instead takes up Bryopsis‘ chloroplasts and toxins, concentrating the toxins at levels 10 times greater than those found in the algae. And, a study published earlier this month discovered a species of bacteria that produces the kalahalides that both the sea slug and algae depend on.

These newly discovered bacteria, christened Candidatus Endobryopsis kahalalidefaciens, have evolved so closely with Bryopsis that they cannot survive without their algal host. However, in exchange for safe harbor, the bacteria dedicate 20 percent of their metabolism to creating the kalahalides that keep algae-munching predators at bay. Nevertheless, not only is Elysia capable of consuming the algae, but it also uptakes and weaponizes the chemicals for its own defense system. However, it does not keep the toxin-producing bacteria, opting to digest them instead.

“It’s a complicated system and a very unique relationship among these three organisms,” says co-author Dr. Mohamed Donia, an assistant professor of molecular biology at Princeton University, “The implications are big for our understanding of how bacteria, plants and animals form mechanistic dependencies … and end up reaching and benefiting a network of interacting partners.”