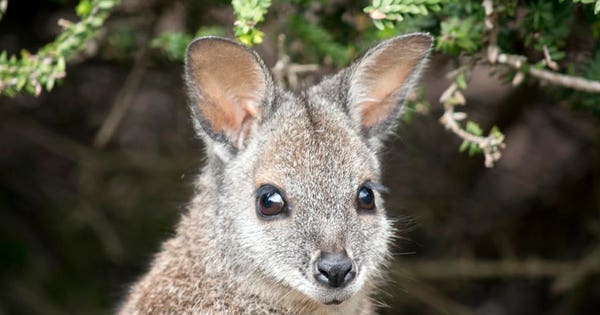 The tammar wallaby is where it all began. Photo credit:Getty

How do humans make a penis? Wallabies, of all things, might have helped us flesh out the answer to that question.

The starting materials for the human phallus are an embryonic organ called the genital tubercle and a hormone called dihydrotestosterone, or DHT. The genital tubercle begins as an undecided little embryonic mound that can become a clitoris, a penis, or something structurally in between.

The usual origin story for the penis is that the embryo-fetal testes make testosterone, which gets converted into DHT in the multi-potential genital tubercle. The DHT acts on the cells of the tubercle, leading to elongation of two columns of erectile tissue adjacent to a urethra that also is elongating under the influence of DHT.

No, you’re not alone in experiencing pareidolia when viewing the internal structures of the penis. Photo credit:Getty

That way to a penis is the pretty well well-known “front door pathway.” There also, it turns out, is what researchers have decided to call, perhaps unfortunately, the “backdoor pathway.” This approach still involves DHT, but this time, the starter hormone comes from other tissues, possibly the fetal liver and the placenta. The placenta produces progesterone, which enzymes can convert into a hormone called androsterone. From there, the genital tubercle takes over and makes DHT.

Authors of a study published 14 February in PLOS Biology say that the “backdoor pathway” also might well be a penis-critical pathway, and that both front and back approaches are required to produce a typically developed penis.

According to the findings of Peter J. O’Shaughnessy of the University of Glasgow and colleagues, male-developing fetuses in the second trimester have only two “male” or androgenic hormones – testosterone and androsterone – circulating at higher levels than female-developing fetuses. The genital tubercle makes the enzymes necessary to convert either of these into DHT. Further analyses confirmed that the androsterone doesn’t come from fetal testes and likely is made from placental progesterone or some other source.

Scientists uncovered the (possibly not) alternative or backdoor pathway to penis development in the wallaby and some other marsupials, giving the pathway its “backdoor” appellation at the same time. Like all marsupials, the tammar wallaby spends the latter two thirds of fetal development in a pouch. That access gives nosey humans window on mammalian development from an early stage.

It also means that humans can futz around with the hormones that send the genital tubercle down the male or female developmental path, so of course, that’s what humans did. Researchers found, for example, that exposing female-developing tammar wallaby fetuses to an androgenic hormone leads the females to develop a typically male phallus (compare, for example, panels A and C in this figure).

They also discovered that the wallaby penis develops by a route that involves making DHT from androsterone instead of from testosterone. Its presence in a marsupial suggests that it might represent an ancient approach in the mammalian family tree to making a penis.

After tinkering around with wallaby penises, investigators then turned to human studies and uncovered the same pathway, described in a paper inevitably entitled “Of marsupials and men.” Those authors were looking into atypical sex differentiation in two families. Affected children in the families had been born with undescended testes (testes descent from the abdomen relies on androgens) and atypical male genitalia, with some of them having been assigned female at birth. An aunt of one of the children had “ambiguous genitalia” and no uterus.

By tracking down the gene changes associated with these differences in the family members, researchers realized that the mutations affected enzymes involved in the same pathway that makes a wallaby develop a penis. The fact that lacking the “backdoor” pathway led to atypical genital development in people suggested that this approach is not “alternative.” Typical penis development may require a convergence of both the frontdoor and backdoor routes.

The authors of the PLOS Biology paper see their findings as confirming this implication. The fact that circulating levels of androsterone and testosterone both are higher in male-developing than in female-developing fetuses suggests a sex-based role for their action. Adding another hint of relevance: one of the most common developmental conditions of the penis is hypospadias, when the urethral opening occurs somewhere short of the tip of the penis. This condition, along with some others related to atypical genital development, often arises when placental function is not optimal, which is called placental insufficiency.

Big potential, but challenges to overcome: A look at offshore wind in the U.S.
Scientists discover what happens in our brains when we make an ‘educated guess’
German chipmaker Infineon prepared to handle increased competition from China, CEO says
From Butts To Bricks, This Is The Plan To Recycle Cigarettes Into Construction Materials
Who gets a COVID vaccine first? Access plans are taking shape