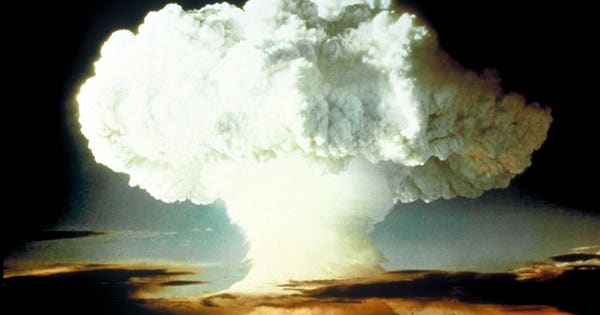 If things had gone just slightly differently on a tense night in 1983, today would be the 35th anniversary of the start of of World War III, for whoever was left alive to observe such an occasion. 6:00 Eastern Time on September 25, 2018 marks the moment when one man’s decision saved the world from nuclear war.

At just after midnight in Moscow, on September 26, 1983, a siren’s wail split the air in the Serpukhov-5 nuclear early-warning facility, a secret bunker just south of Moscow. The red screen across the room from Lt. Colonel Stanislav Petrov’s glass-walled office, usually blank, flashed a single ominous word: START. The computer system responsible for processing data from the Soviet Union’s Oko launch-detection satellites warned that the United States had just launched a single intercontinental ballistic missile at the Soviet Union. It would strike in 12 minutes.

Petrov picked up the phone in one shaking hand and called his superiors in the Soviet Air Defense Forces. False alarm, he told them. It didn’t make sense for the U.S. to have launched a single missile; the reading had to be a bug in the new early warning computer system, which Petrov the software engineer didn’t yet completely trust. He had just set the phone back on its cradle when the system flashed a second warning, then three more. Five nuclear missiles were, according to the satellites and their computer system, flying on high ballistic arcs toward the Soviet Union. The computer system calculated the probability of attack at 100%.

“I had a funny feeling in my gut,” Petrov later told a reporter from the Washington Post. If the launch was real, every second would count. Petrov’s duty was to pass the warning up the chain of command, providing information to the people with the authority to launch a return salvo before the U.S. missiles could destroy the Soviet Union’s ability to strike back.

But he hesitated. He knew the computer system had been pushed into service too quickly for proper testing, and he didn’t consider it reliable. Ground radar, which should have picked up the incoming missiles as soon as they crossed the horizon, remained silent and empty a few minutes after the supposed launch. And five missiles, out of the roughly 1,000 in the U.S. inventory, all aimed at Soviet targets, seemed like too few to be a real first strike — when war came, Soviet officers had been taught, the first strike would be massive an overwhelming, because neither power was likely to get the chance to make a second.

With the siren still wailing and the alert still flashing on the screen, Petrov picked up the phone and called his superiors to report a second false alarm. But even in that moment, he wasn’t sure.

“The thought crossed my mind that maybe someone had really launched a strike against us,” he told a BBC reporter years later. It took an excruciating 15 minutes of waiting before he could be sure. In the end, nothing happened. The world had come within a hair’s breadth of nuclear war, and no one outside Petrov’s chain of command even knew about it until 1998.

Petrov had been right to distrust the new computer system, it turned out. In a chance alignment of the satellites’ orbits with the reflection of sunlight off high-altitude clouds over North Dakota, the system had misread the resulting glare as the gleam of incoming missiles. To address the problem, the system added an automatic cross-reference against data from geostationary satellites, which would be looking down from a different angle.

And Petrov, who had taken a tremendous risk and helped save millions of lives, wasn’t immediately rewarded or punished. He was quietly reassigned to other duties, and retired early from the Soviet Army in 1984; he lost his wife to cancer a few years later. Petrov’s bold decision to trust his gut won him international acclaim once the story became public in 1998, but despite making several tours abroad and doing countless media interviews, Petrov lived on a meager pension in a small flat in Moscow until his death in 2017.