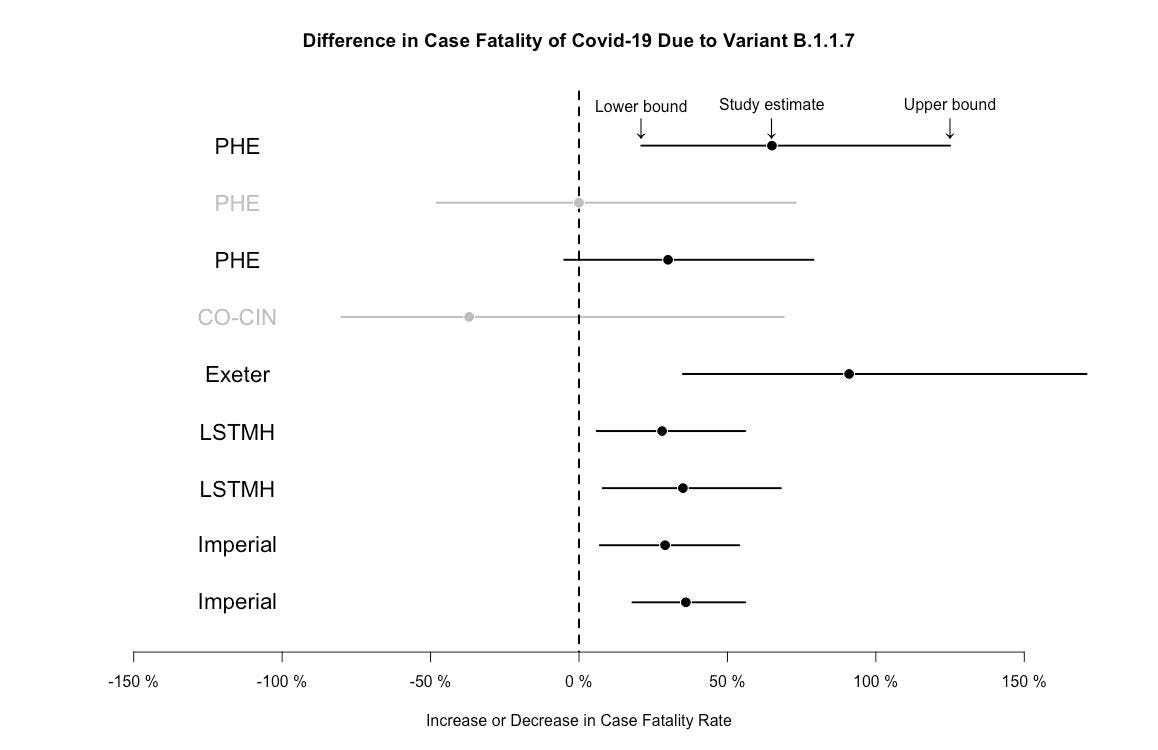 In December, a new fast-spreading variant of SARS-CoV-2 was reported in Great Britain. There is now evidence that it is more lethal.

Media reports, including the BBC and the New York Times, say the new variant, known as B.1.17, may be “about 30%” more deadly. These reports disguise the level of uncertainty in this estimate. On the lower end, individual studies are somewhat equivocal. On the upper end, frighteningly, one study finds that it may be almost three times as deadly. Taken together, the evidence suggests that the new virus is almost certainly more deadly than the old one.

All of these findings come from a report published by the New and Emerging Respiratory Virus Threats Advisory Group, also known as NERVTAG.

The NERVTAG report summarizes nine results from five different unpublished studies as shown in this figure.

Each study reports an estimate of the relative case fatality rate of B.1.1.7 along with a lower or upper bound. There is general agreement among these studies that infection with the variant is more likely to lead to death than infection with other variants. The two studies shown in grey are the most optimistic, but they are also the most questionable. Of these two, the one performed by Public Health England (PHE) used limited, early data. The one from the COVID-19 Clinical Information Network (CO-CIN) looked only at outcomes among people who were hospitalized, rather than anyone in the population that was infected. The other studies are largely in agreement that variant B.1.1.7 is somewhere between 15% and 65% more lethal than the original virus.

Some scientists have expressed reservations about these conclusions. Sir Patrick Vallance, the UK government’s chief scientific adviser, has emphasized that the evidence is “not yet strong”, and the New York Times says the evidence is “far from conclusive”. The main reason for these qualifications is the possibility that the samples are biased from small or unrepresentative samples. The Public Health England study, however, was based on a total of 184,414 people — which is not a small sample.

There are other limitations to the studies (for instance, conclusions that might be biased by misclassified viral diagnoses or the threshold chosen for reporting laboratory results), but the NERVTAG report includes convincing reasons to believe these effects to be minimal.

Also overlooked by many people is that the relative increases in fatality appears to be consistent across age groups. For illustration, media outlets are reporting the difference in the fatality rate for 60-year-olds. But, this should not be interpreted to mean that only older age groups suffer more greatly from B.1.1.7. The NERVTAG report suggests that the relative difference between the original virus and B.1.1.7 is the same no matter what age group you are in.

Besides being more deadly on a case by case basis, B.1.1.7 is also expected to be more deadly overall because it is more transmissible. As Anthony Facui has explained, a faster spreading virus will lead to more deaths just because it leads to more infections.

But, a virus that isn’t inside you can’t hurt you and the guidance hasn’t changed. For all of our sakes, please wear a mask and practice physical distancing.

European Starlings’ Global Success Reveals Evolution Doesn’t Always Take Millions Of Years
Some Are Claiming Blue Gas Is A Tesla Killer. It’s Not.
We May Have Company. Scientists Detect A Planet Around The Star Next Door And Have A New Way To Find More
Two years after launch, Huawei to roll out its Google Android rival to phones — with big challenges
Our grid isn’t ready for climate change