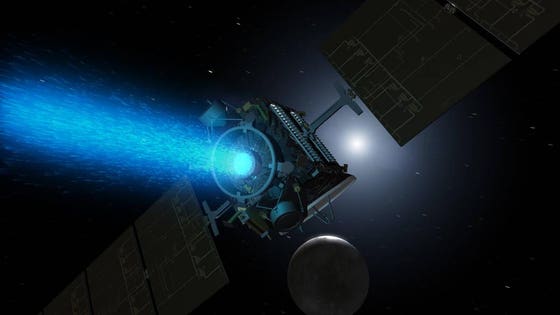 Dawn is riding off into the sunset.

The NASA spacecraft—nearing the end of an eleven-year mission—is almost out of fuel.

Indeed, what’s left of the hydrazine—a key propellant—is virtually infinitesimal, not even enough for NASA scientists to measure.

“Our best analysis says we have zero,” Rayman says. “No useable hydrazine on the spacecraft.”

No one is certain exactly when the end will come.

“But very, very soon,” says Rayman, Dawn’s chief engineer and mission director. “We expect it to be at any time. Perhaps any minute now.”

Orbiting the dwarf planet Ceres—and about 175 million miles from Earth—Dawn has been on borrowed time for weeks. NASA thought the spacecraft would be spent by mid-September; surely by mid-October.

The probe launched from Cape Canaveral in September, 2007. Then, little was known about Ceres, a cold, cryptic world roughly the width of Texas, and the largest body in the main asteroid belt.

The journey took seven-and-a-half years, including a 14-month stopover at Vesta, the brightest, biggest asteroid in the solar system.

Now we know more, much more. Dawn has delivered astronomers more than 100,000 images of Ceres and Vesta—a stunning celestial catalog.

Of the two, Ceres is the more photogenic.

An ice volcano, which once spit a frosty and muddy magma, peaks at 16,000 feet. Organic materials, the “building blocks” for life, coat thousands of acres. A staggering amount of salt water, nearly all frozen, bulges below the surface; when it breaks ground, salt deposits—luminous, spooky—remain as glimmering residue. Dawn unveiled, says Rayman, “a beautiful and complex Ceres.”

Even now, flying on dregs, Dawn dips close every 27 hours, only 22 miles above the surface, collecting still more reconnaissance.

“Every bit of science we’ve been getting for a while is pure bonus,” says Rayman. “Every time Dawn goes to low altitude, we get unique, valuable data about Ceres.” Researchers worldwide will scrutinize that data for decades.

When the hydrazine goes, Dawn essentially loses equilibrium—and can no longer point its solar panels at the Sun, the antenna to Earth, or the sensors to Ceres. Dawn is then effectively dead in space. “And that,” Rayman declares, “will be the end of the mission.”

Communication with the craft, via the Deep Space Network, is scheduled most days; scientists will know something’s up when NASA calls and Dawn doesn’t pick up.

A single missed transmission doesn’t necessarily mean anything. Several misses in a row, however, means it’s over. “It’s going to take a significant fraction of a week, or maybe even a week, before we can make a confident determination,” says Rayman.

Muted, dimmed, and disconnected, Dawn will commence a long, quiet ride around Ceres, a slow tumble likely to last decades. NASA guarantees 20 years before the spacecraft ultimately crashes. “But even in 50 years,” says Rayman, “we have greater than 99 percent confidence that Dawn will still be in orbit.”

The longer, the better. NASA might decide, one day, to go back to Ceres; those organic materials await further study. Yet Dawn is covered with carbon-containing molecules—Earth microbes, plastics, chemicals—call it “terraphernalia.” A smashup might taint the pristine surface. But a 50-year orbit (or even 20) gives NASA a window to mount a mission, Rayman says, “without the results distorted by contamination.”

In the meantime, what’s ahead for Dawn—that languid, drowsy dance around Ceres—somehow seems fitting.

“Dawn will become an inert, celestial monument to human creativity and ingenuity,” Rayman says. Just think of those elegant somersaults as victory laps.

Momentus SPAC merger seeking extension
Earthquake And Tsunami Hazards Along Coasts Might Be Higher Than Expected
Mercury Rises As Brilliant Venus Returns: What You Can See In The Night Sky This Week
Even 85,000 years later, we can still see how early humans shaped the land with fire
The mystery of white dwarfs with intense magnetic fields could finally be solved