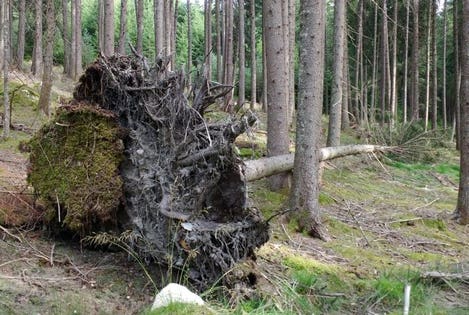 In a video taken last week in Sacre-Coeur, province of Quebec in Canada, it almost looks like the earth is breathing, as the ground moves up and down. Air is involved in this illusion, as strong wind plays a role in moving the trees and the topsoil.

During a storm the ground becomes saturated with water, reducing the soil’s cohesion. As strong winds move the top of the tree, the force is transferred by the stem, acting as a lever, to the roots and the ground begins to move.

This mechanism works best with spruce trees (genus Picea), with their almost disc-shaped root system growing in the uppermost layers of the soil. A 0.5-inch thick root can sustain almost 350 pounds before it breaks, enough force to move the ground and smaller boulders. Only if the wind is strong enough or lasts long enough the tree will eventually topple.

This effect of trees onto the ground is also of interest to geologists. On steep slopes trees can stabilize the ground with their roots, acting as a sort of safety-net and keeping loose debris together. However, as the tree moves with the wind, it can also loosen debris and trigger a rockfall.