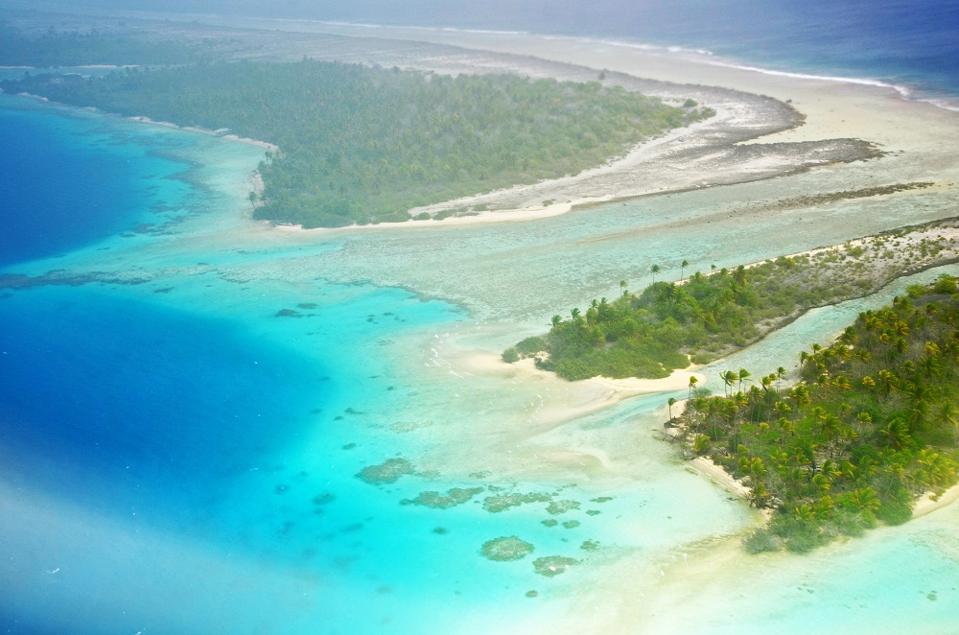 The breathtakingly tranquil waters of Anaa, one of many French Polynesian isles that dot the South Pacific, belie the island’s turbulent past.

Most recently, a 1983 hurricane devastated the coral-fringed atoll and its lavish supply of coconut trees that gifted the residents their primary source of income. Despite rebuilding their town and regrowing the trees, the population dwindled from around 2,000 to 500 people facing challenges with employment, education and food insecurity.

In 2015, the stars aligned. A feisty Tahitian lawyer, Hinano Bagnis, teamed up with Mat McHugh from Fly Odyssey and the late multi-millionaire Sir Douglas Myers, all with a common dream: to help empower small island communities to become economically stable while preserving marine conservation.

From this alliance, the Anaa Project was born, then The Island Initiative evolved in 2018 as an official UK charity with ongoing support from Sir Myer’s estate.

“And an island that was dying is today totally reinvigorated,” says Bagnis, reflecting happily on how their efforts have had ripple effects throughout the community.

How did they achieve this?

First, McHugh established that Anaa, in the Tuamotu archipelago, had rich potential for catch-and-release fly fishing, its shallow waters teeming with the popular silvery bonefish (Albula glossodonta) in untouched surrounds that are like a slice of turquoise heaven.

With the help of Fly Odyssey, they launched fly-fishing as a foundational sustainable development plan, trained local fishermen to become fly fishing guides and created related eco-tourism opportunities through hospitality and accommodation.

One of two main “pensions” on the island, Toku Kaiga, comprises individual huts with verandas overlooking the lagoon, their quality surprising fly fishermen Simon and David. “It definitely exceeded my expectations,” David said in an interview. The other, Kanapa Lodge, is slightly inland so doesn’t boast water views and the huts are a little simpler, but the hosts embrace their guests like family – and are especially obliging and creative when it comes to cooking tasty meals for vegetarians and vegans.

More than 100 anglers have now visited the Atoll since 2016, taking the weekly two-hour flight from Tahiti.

At the same time, the charity invited marine biologist Alex Filous to investigate the sustainability of Anaa’s fish. He identified bonefish – called Kiokio by Anaans, one of their top favorites – as the island’s most abundant fish and therefore critical to food security as well as the livelihoods of local fishermen.

With support from Indifly, Filous investigated the fish population’s viability and revealed their numbers were perilously low.

“The answer was that it was fairly over-exploited,” he says.

Filous embarked on an exhaustive PhD to explore the bonefish’s reproductive cycle, and identified that local traps were capturing the females during a critical three-month spawning period.

As a result, school principal Jean Pierre Beaury set up a French government-funded Educational Managed Marine Area to teach students about marine conservation. The children went door-to-door asking residents to sign a petition to protect the fish and, despite Filous’ fears they would angrily hunt him down, 297 out of 300 people signed it (one dissenter was the mayor).

The community banded there together this year to reinstate an ancient tradition called rahũi and close the harvesting season from March to May for three years. By giving the female fish a chance to spawn without capture, their numbers should increase over time. Profits from fly-fishing were used to reimburse fishermen who rely on the catch for their livelihood.

“We want to have the whole economy on the island benefiting from this,” says Bagnis. “But now there’s a ripple effect, because fly fishing is tourism, and you’re bringing people with money who can buy things. So now it’s now time to develop art and craft and agriculture and all those side economies around the island to develop more cultural tourism.”

As one spin-off, Filous and the guides created special flies for the anglers that mimic the worms, clams and mantis shrimps in Anaa’s lagoon, as the flashy, colorful ones that fly fishermen brought with them don’t fool these fish.

“The worms here are not very glamorous,” says Filous, “they look like a bit of snot.”

The special flies are also heavy enough to sink to the shallow bottom where the fish feed. Filous then taught a handful of Anaa residents how to make the flies, with seed funding for materials from the Island Initiative. These form part of the fly-fishing package for tourists and provide income for those islanders.

To help other residents launch business projects, Bagnis created a start-up community fund, like a grant scheme, from the fly-fishing profits. The first person to apply was Nolan, a man with an idea to make sarongs to sell to tourists and interested parties in Tahiti – he was awarded money for paint and fabrics to get him started.

Meanwhile, resident Valencia has been making a creative range of arts, crafts, bowls, plates and hats from local plants and coconut trees. Fronds, shells and inner and outer peel from the island’s abundant coconut trees are transformed into works of art, both decorative and practical. She has also experimented with ways to bleach and even colour them with natural resources (a secret recipe that she keeps close to her chest).

Down the road, another local, Vairea, makes an array of jewelry and crowns from shells. She has also devised a tincture made from a local herb, hora hora, sugar and coconut milk, believed to be a medicinal, cleansing drink. Whether or not it has healing properties, it can be rubbed on the skin and hair, leaving a lingering scent reminiscent of coconut macaroons.

Avid gardener Renee has scaled up his rich vegetable garden with the goal of selling produce, including vanilla beans which are highly sought after in Tahiti. He also helped set up a school vegie patch, supported by the mayor, to make lunches for the school students.

Many residents now make the most heavenly honey from their own bees. The Island Initiative’s operation manager, Moana Kautai, explains that once someone catches onto an idea, it spreads like wildfire. He is passionate about mobilizing the community to create more initiatives to support themselves.

Bagnis doesn’t necessarily credit all these activities to the Island Initiative.

“I’m not trying to say this is because of us, but what I do think is by going on this island and starting something it has brought back, you know, a positive trust in the people. They have started to believe again in themselves.”

Local mayor, Calixte Yip, has also joined in the spirit by using public funds to employ local people rotationally to give them a source of income and workplace training at the same time, and the school is piloting a sixth grade teacher – with close inspection by Tahitian education authorities – to keep their children on the island longer. If it’s successful, other islands will follow suit and the children won’t have to leave home so young to continue their schooling.

Glowing from the project’s success, Bagnis wants the Island Initiative expand their activities to help other islands while helping Anaa continue to move towards self-sufficiency – not to make tons of money, she says, but so they can have a better life and be less reliant on subsidies from Tahiti.

As far as eco-tourism, for people who aren’t into fly fishing, Anaa has much more to offer. You won’t get fancy hotels like in Bora Bora, because the islanders want to keep things simple and local. And therein lies its appeal for those who seek a real escape without the frills.

The island’s tranquility is only interrupted by the rural sounds of roosters, and you can explore on foot or borrow a bike for a leisurely ride on roads where children play and dogs loll around, passing only the occasional car travelling at a snail’s pace with cheerful drivers waving hello.

There is much to explore around the lagoon too, with the help of skilled boat drivers who can navigate the coral reefs beneath the water’s surface that sparkles like liquid crystals in the warm sun. Guides can organize picnics on remote parts of the lagoon, where locals greet visitors with leis, fresh coconut milk straight from the fruit and barbecued fish and other goodies served on freshly woven leaf platters. If you’re lucky, after a couple of beers they could start playing ukuleles and singing traditional songs. On the way there they might take keen snorklers to explore stunning reefs with multi-colored corals housing velvet-like clams and a resplendent array of marine life.

In what is possibly one of the most heavenly places on Earth, the experience will make the world and all its worries seem like a distant memory. And visitors will be well looked after by this resilient community of relaxed, warm-hearted people who have fought hard to keep their little piece of paradise.