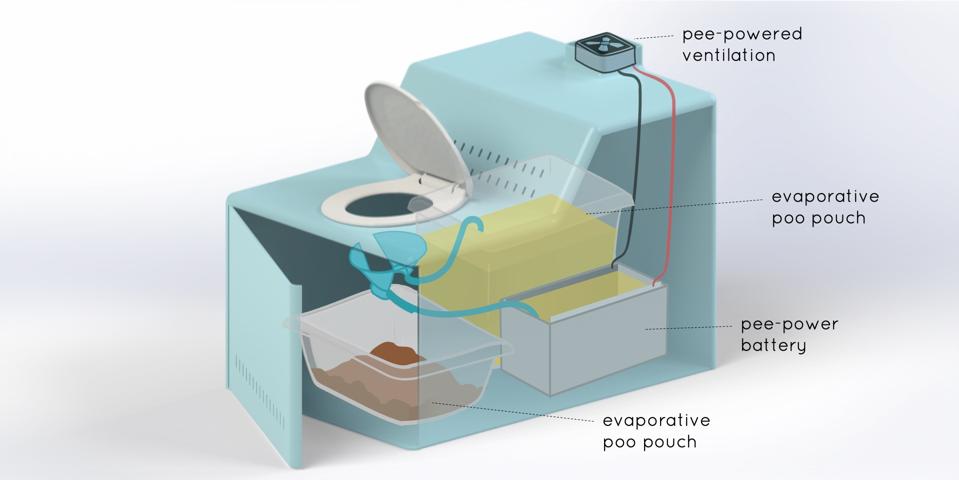 When you can’t flush it, vaporize it. A company called change:WATER Labs is developing an alternative to flushing waste called the iThrone. It’s described as a portable, space-saving, waste-shrinking toilet that eliminates up to 95% of daily waste on-site. It’s designed for dwellings and communities that lack power or plumbing. And it just snagged funding from the MIT Solve initiative of the Massachusetts Institute of Technology.

The solution has been in the works for about six years, the company says. This fall, change:WATER Labs plans to conduct its first pilot deployment in a district school and hospital in Uganda, providing sanitation to 500-1,000 people.

“Using a breathable membrane to soak up and evaporate (or “flush away”) the liquid content of daily waste, not only does the iThrone NOT consume or pollute water, but it actually converts waste INTO clean water (vapor),” the team explains on an MIT Solve page.

“By containing and eliminating unflushed waste, the iThrone will help clean up communities. The iThrone is an ideal drop-in solution to provide immediately safe sanitation at low-cost to more people—in slums, camps and transitional communities. By shrinking sewage, the iThrone drastically cuts waste management/collection costs while increasing toilet-access and servicing capacity.”

More is explained in an “elevator pitch” video.

In technical terms, the company describes the membrane as “a shrink wrap for crap” that dehydrates human waste without the need for external power or heat. It runs off of a “pee-powered” bio battery that converts urine into electricity that powers a fan to eliminate odors.

There are other container-based toilets, iThrone developers say, but this one only needs to be emptied once or twice a month as opposed to every one or two days.

When someone uses the iThrone, the waste is collected in evaporative pouches. The pouches dehydrate liquid and solid waste daily so that only a few grams of dried solids remain inside and are hygienically contained.

Used pouches can be swapped for clean pouches, with the shrink-wrapped stuff disposed of in a landfill, processed at a treatment plant, or used to make fertilizer or fuel depending on the location, says Diana Yousef, founder and CEO of change:WATER Labs.

“… for all of these options, our waste-shrinking solution makes all of these processes much cleaner, more economical and more efficient,” Yousef adds. “And where waste-collection and waste-processing are not yet established, our solution flips the economics around so that resource-constrained communities now have an scalable, sustainable option that they can implement to clean up their communities.”

The cost to install and maintain one communal toilet can fund four iThrones, the company says.

The latest recognition from MIT Solve was the Innospark Ventures Prize of $50,000. The iThrone Evaporative Toilet was one of eight Solver teams selected as part of a Healthy Cities Challenge. The award makes developers eligible for future funding.

From Prototype to Deployment

There’s a big need for technology like this. About 1 billion people in cities around the world can’t flush. They lack access to safe, clean toilets, largely because they live in homes with no sewage plumbing, Yousef explains.

According to the United Nations, which marks World Toilet Day every Nov. 19, around 60% of the global population, amounting to 4.5 billion people, either have no toilet at home or one that doesn’t safely manage waste. This leads to open defecation, contaminated drinking water and disease.

The iThrone is a prototype for now. But after installing five to six toilets in Uganda this fall, change:WATER Labs plans to have 10-15 deployed for a beta-trial within a year, then move to a market launch of 6,000 units based on pre-orders.