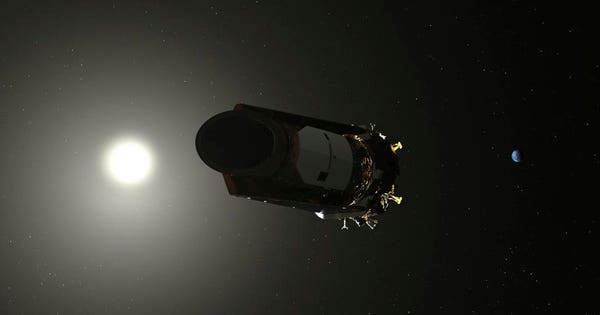 The Kepler Space Telescope has run out of fuel and ended its 9.5-year career, just days after astronomers announced possible evidence of a moon orbiting an exoplanet.

Launched in 2009, Kepler discovered thousands of planets orbiting distant stars by watching for the faint dimming of a star’s light that happens when a planet passes between the star and our solar system. Nearly a decade later, Kepler has run out of the hydrazine monopropellant that helps keep the spacecraft pointing in the right direction against the pressure of solar radiation.

To The Last Drop

“This was not unexpected,” said Paul Hertz, Astrophysics division director at NASA Headquarters in Washington, during a press conference. “All fuel-limited spacecraft are known to be fuel-limited when we launch them. We can estimate their lifetimes, and we’re not surprised when they run out of fuel, but when they run out of fuel, then we get to have a celebration of all the great science they have done.”

The fuel finally ran out two weeks ago, but the Kepler scientists and engineers had working since late June to transfer all the data stored aboard the spacecraft back to Earth. After that, with the very last of the fuel, the team gathered some final data and transferred that back to Earth as well — and they didn’t let a single drop of fuel go to waste. “We collected every bit of possible science data and returned it all to the ground safely,” said Charlie Sobeck project system engineer at NASA’s Ames Research Center. “In the end, we didn’t have a drop of fuel left over for anything else.”

Soon, the team will shut off Kepler’s radio transmitter to keep from adding unnecessary noise to the already-crowded radio frequency spectrum. They’ll also shut down its onboard fault protection system, because otherwise the spacecraft’s computer might decide to turn the radio transmitter back on, as if correcting a simple mistake. Kepler, now 94 million miles from home, will gradually drift into a stable orbit around the Sun, where it will remain, pointed in whatever direction the solar wind turns it, still staring at the stars in silence.

Although the Kepler Space Telescope’s life is over, this week’s exomoon is not the last Kepler discovery we’ll be hearing about. Analyzing the data from its final months could take several more years. “These ongoing discoveries will be enabled by a powerful combination of new software tools, new data analysis methods such as machine learning, and new data both from missions like TESS and upcoming missions like the James Webb Space Telescope,” said Jessie Dotson, Kepler project scientist at Ames. As of October 29, Kepler had discovered 2,681 planets orbiting other stars, with another 2,899 possible exoplanets, called candidates, that haven’t yet been confirmed. Many more could be waiting in the data Dotson and her colleagues are analyzing.

When William Borucki, retired Kepler principal investigator, and a group of colleagues proposed a planet-hunting telescope to NASA in the late 1990s, no one knew whether our solar system was normal or just a fluke. Astronomers Michael Mayor and Didier Queloz had discovered the first known exoplanet, Pegasi 51b, in 1995, but scientists still weren’t sure whether planets were common or rare. The answer would have important implications for efforts to understand whether life might exist elsewhere in the galaxy.

And Kepler revealed a surprising diversity of planets, including some that look totally unlike our neighbors in this solar system. Many of the planets Kepler has spotted over the years have been larger than Earth but smaller than Neptune, a size range that’s completely absent from our solar system. And some of them may be pretty wild, like Kepler-22b, the first exoplanet to be discovered in the habitable zone of another star. Based on estimates of its mass and diameter, Kepler scientists have speculated that Kepler-22b may be mostly ocean over a small, rocky core. “It’s one of my favorites,” said Borucki.

Borucki is also a fan of the Kepler-444 system of planets, a collection of five hot, rocky worlds orbiting an orange main sequence star 11.2 billion years old. That’s 6.5 billion years older than the Sun, about the same age as the Milky Way galaxy, and about 80% as old as the universe itself. “Imagine what life must be like on such planets,” he said. “If life was developing over the 6.5 billion years before Earth was formed, there may be some very interesting life forms for us to find as we search these early planets.” Of course, given how closely the Kepler-444 plants orbit their star, they’re probably much too hot to host life.

As for whether our solar system is average or a fluke, the answer turned out to be a bit of both. Solar systems with planets are fairly common, but most of them don’t look much like ours. “Because of Kepler, we know that solar systems come in a variety of configurations completely unlike our own: solar systems with Jupiters orbiting their stars in only a few days; solar systems with small, rocky planets packed inside the orbit of Mercury, so close that the planets are in resonance with each other,” said Herz.

When a planet passes in front of a star (from our point of view), it blocks a small portion of the star’s light from reaching observers in our solar system. How small? A planet’s transit can block as little as 1/10,000th of the star’s light. “It was like trying to detect a flea crawling across a car headlight when the car was 100 miles away, and the instrument must do it for 150,000 stars simultaneously,” said Borucki.

And it wasn’t easy to convince NASA that it could be done well enough to deserve funding. Borucki and his original team of scientists and engineers first had to prove that electronic light sensors called CCDs — the backbone of most modern telescope sensors — were sensitive and precise enough for the task, that a telescope could actually track thousands of stars at once, that astronomers could analyze the massive quantity of data required, and that they could do all of that on a spacecraft. They submitted five proposals for the project over several years before NASA finally said “yes” in 2001.

The $550 million telescope launched on March 7, 2009 for a scheduled four-year mission. Its launch carried into orbit around the Sun — not Earth — where it would slowly fall behind the planet on an orbit about a week slower than Earth’s. Kepler spent those first four years focused on a single section of the sky, watching the same set of distant stars for the faint dimming of a planetary transit. And it did not disappoint. “That exquisite data allowed us to firmly establish that there are more planets than stars, planets are diverse, planetary systems are diverse, and that small planets in the habitable zone are common,” said Dotson.

But in 2013, around the scheduled ending of Kepler’s original mission, the second of its four reaction wheels — which help keep the telescope pointed in the right direction — failed. Kepler’s engineering team worked out a way to use the pressure of solar radiation to help hold the telescope on target, and that new start marked the beginning of an extended mission, K2. The extended mission pointed the telescope at a wider area of the sky, and while the first Kepler mission had focused on more distant stars, K2 set its sights on brighter, closer stars, where it spotted many small planets that Dotson considers prime targets for current and future missions to study their history and composition.

“I always felt like it was the little spacecraft that could. It always did everything we asked of it, and sometimes more, and that’s a great thing to have in a spacecraft,” said Dotson.

Those efforts will continue with TESS (Transiting Exoplanet Survey Satellite), which launched in April 2018 and began doing science in July. Scientists, led by Padi Boyd, project scientist for NASA’s Transiting Exoplanet Survey Satellite at NASA’s Goddard Space Flight Center, are already analyzing the first TESS data and identifying exoplanet candidates. Because TESS, like K2, is primarily looking at bright, close stars, it’s possible for powerful ground-based telescopes to follow up with their own observations.

“We’re hoping to find our near neighbor planetary systems,” said Boyd. “We are hoping to be able to put the next layers of information on those and determine what those planets are like as places. It’s easy to measure the size of a planet — comparatively easy — but it’s much, much harder to tell if that planet has an atmosphere, which is so important to life here on Earth, and also, if it does have an atmosphere, what does it contain?”

When it launches in 2021 (unless it suffers further setbacks), the James Webb Space Telescope will bring infrared observations to bear that question. Many of the elements of habitability, such as carbon, oxygen, and water, leave their spectral fingerprints in the infrared, where Webb has a good chance of spotting them. And that, along with future missions, may help scientists fill in the third term of the Drake equation and get one step closer to understanding how isolated we are — or aren’t — in the galaxy.

Google Earth can now show you how much the planet has changed in 37 years
The Next Frontier: Engaging Employees In Sustainability
A buried chunk of alien world could be behind a weak spot in Earth’s magnetic field
Coinbase indicated to open on Nasdaq at about $360 per share, up from $250 reference price
Amazon unveils new wireless earbuds that are smaller, cheaper and have better noise cancellation