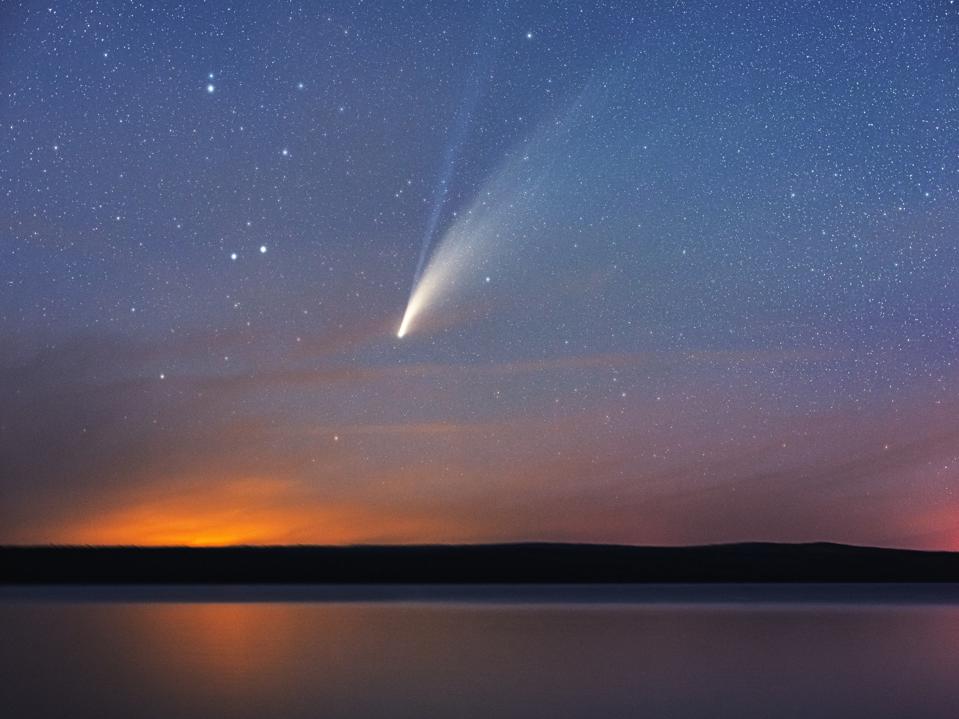 Comet NEOWISE has turned out to be the most photogenic since Comet Hale-Bopp in 1997, but if you’re having trouble finding it with your naked eyes, you’re not alone.

No matter how many star-charts you consult, finding this icy visitor from the outer Solar System is not as easy as it should be.

Is it your eyes? Is it you not knowing exactly where to look?

No—it’s light pollution where you live, which is likely increasing each year.

That makes the once-in-a-decade appearance of a bright comet a big moment; it could be your first, and possibly your last, chance to see a comet with the unaided eye.

MORE FROM FORBESAct Now For Your Best And Last Chance To See Comet NEOWISE This Weekend. Here’s When, Where And HowBy Jamie Carter

How does light pollution affect the visibility of comets?

Light pollution affects the visibility of comets in generally the same way as it reduces the visibility of stars. “It lowers the contrast between the comet and the blackness of space beyond,” said John Barentine, Director of Public Policy at the International Dark-Sky Association (IDA), a non-profit in Tucson, Arizona. “Since our eyes don’t detect small differences in contrast at low light levels particularly well, diffuse objects especially like comets simply don’t stand out well.”

So while it’s possible for some to make-out the concentrated light of a comet’s coma, light pollution can mean many completely lose sight of Comet NEOWISE’s two tails.

How common are bright comets?

There are always a few comets around in the inner Solar System that vary in brightness.

However, very few get as bright—and even fewer look as impressive—as Comet NEOWISE, but with a decent telescope and a dark sky, you can expect to see several comets per year.

Are comets getting harder to see with the naked eye?

“With the constant increase of light pollution in the night sky the observation of comets with the naked eye is becoming much rarer,” according to Gareth Dorrian, Post Doctoral Research Fellow in Space Science, University of Birmingham, and Ian Whittaker, Senior Lecturer in Physics, Nottingham Trent University, writing in The Conversation a couple of weeks ago.

Barentine agrees, though with the caveat that there have been comets throughout history that were bright enough to be visible in full daylight. That could happen again, but the problem of light pollution remains.

“Comets are becoming more difficult to see without the aid of telescopes or binoculars, and that’s attributable to two things—the increasing urbanization of humanity, and the light pollution that typically comes with that urbanization,” said Barentine. Of course, most of us now live in cities. “Whereas in the historic past fewer people lived in cities and there was considerably less electric light in those cities (or none at all), the opposite is true today,” said Barentine.

How to find Comet NEOWISE despite light pollution

Binoculars massively help the naked-eye observer, and cameras can certainly find Comet NEOWISE, which is currently under the Big Dipper/The Plough/The Saucepan in the northwestern sky right after dark (as seen from the northern hemisphere).

Here are a couple of star-charts:

It’s now definitely getting fainter, but it’s also getting higher in the sky right after twilight ends.

So how are we seeing photos of Comet NEOWISE looking so bright?

While naked-eye comet-hunters are struggling with light pollution, adventurous astrophotographers have been able to find and photograph Comet NEOWISE, no problem.

In fact, there have been thousands of exquisite images produced of the once-in-6,800 years visitor to the inner Solar System.

That’s because astrophotographers are using long exposures of 10 seconds or more to capture the light from the comet, which is over 64 million miles from us.

Astrophotographers, amateur astronomers and stargazers are also heading to dark sky sites well away from the sky-glow over cities. They’re doing that because they know all too well about the nasty effect of light pollution on their hobby.

The night sky is being obliterated—and it’s not SpaceX Starlink satellites that are the real problem.

MORE FROM FORBESHow To Photograph Comet NEOWISE, Our Most Spectacular Comet For 23 YearsBy Jamie Carter

How much has light pollution worsened since the last bright comet?

The last truly great comet was Hale-Bopp 23 years ago. Since then the spread of light pollution has continued largely unabated. “Coincidentally Hale-Bopp appeared in 1997, which was a year in which the satellite data were collected that gave humanity its first truly global view of light pollution,” said Barentine.

He’s referring to the “first World Atlas of the artificial night sky brightness,” published in 2001, that contains this statement:

“More than two-thirds of the United States population, about half of the European Union population and one-fifth of the World population have already lost the possibility of seeing the Milky Way.”

MORE FROM FORBESNASA Teases ‘Psyche,’ A Robot To Explore An Asteroid Worth More Than Our Global EconomyBy Jamie Carter

Fast-forward just about 20 years to 2016, when a new global assessment was published and the problem had worsened:

“The Milky Way is hidden from more than one-third of humanity, including 60% of Europeans and nearly 80% of North Americans.”

“That change represents a grievous loss of access to the night sky in less than one human generation,” said Barentine.

What else is light pollution preventing us from seeing?

Of course, it’s not just comets that light pollution is preventing us from seeing. While the Moon and bright planets like Jupiter, Saturn and Venus are really obvious even to those standing in the middle of a brightly-lit city, there are other celestial objects that we used to be able to see from everywhere on the planet that are no longer visible to most people.

“Comets will be infrequent, and NEOWISE shows us how captivating they can be, but there are fainter objects, like novae, that one might have seen previously even with the naked eye—if one knew where to look—and that are now masked by skyglow,” said Barentine.

“Fainter meteors are lost to light pollution, so only maybe one or two meteor showers are worth looking for each year,” he adds. “We’re not completely cut-off from the cosmos, but our access to it in the world’s cities, compared to what it once was, is now severely restricted.”

How can we stop light pollution?

Switching-off unnecessary lights is easy and doesn’t cost anything; it actually saves money. There are, of course, two ways to do this; reduce our own unnecessary use of light, and limit light pollution by law.

We can all take steps to curb light pollution that are safe and cost-effective, starting with the outdoor lighting on our own homes. “We urge everyone to take a look at our Five Principles for Responsible Outdoor Lighting, published in cooperation with the Illuminating Engineering Society, principles which are easy to understand,” said Barentine.

“By putting light in the places we need it, in the right times and amounts, we can make nighttime spaces better for everyone while reducing the amount of wasted light that ends up in the night sky and makes it harder to see objects like Comet NEOWISE.”

Do we need new laws to stop light pollution?

However, why not have laws to prevent the overuse of light? “New laws would bake those ideas into lighting designs allowed under building and energy codes, just like we mandated safe electrical equipment, plumbing, etc. through law,” said Barentine. “In the long run, it saves money and electricity and improves nighttime visibility simply by keeping the light where it needs to be and out of the night sky.”

“It’s win-win-win all the way around for jurisdictions that adopt such laws.”

Despite the doom and (lack of) gloom around light pollution, it is still possible to see Comet NEOWISE in the night sky with the naked eye.

Taking binoculars—and, if you can, a manual camera—will help enormously in your search for Comet NEOWISE, but get yourself something dark this weekend and you should be able to glimpse, in clear skies, a beautiful comet with an ethereal tail.

Creeping light pollution means that the bar for being judged a “great comet” is constantly being raised.

Egyptian authorities just found 14 more coffins that have been sealed for 2,500 years
Stadium Acoustics Pump Up the Volume
How To Plan A Safe Autumn Stargazing Getaway
Virgin Orbit Seeking Over $100 Million As ‘Jaw Dropping’ Costs Mount And Small Satellite Market Narrows
Scientists discover what happens in our brains when we make an ‘educated guess’