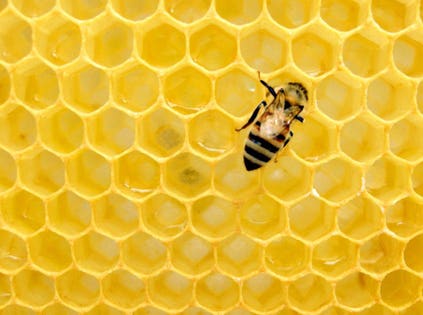 A variety of bee species have been managed by humans over thousands of years to provide a ready supply of honey and, much later, pollination services for a diversity of food crops. But the most common and widespread of these are honey bees, Apis mellifera. In fact, the American Beekeeping Federation estimates that honey bee pollination services are worth as much as $20 billion to US food crop production alone, and the National Honey Board valued the 2013 honey crop at over $300 million. Obviously, honey bees are economically important, but unlike domesticated animals, honey bees are not solely dependent upon people to survive. Even today, honey bees are quite capable of living in the wild, free from human interference.

What were the lives of wild honey bees like before humans began intensively managing them and moving them all over the world? Surprisingly, we know little about this. After a career of fieldwork and research into wild honey bees, Thomas Seeley, a distinguished professor of biology at Cornell University, provides insights in his quintessential book, The Lives of Bees: The Untold Story of the Honey Bee in the Wild (Princeton University Press, 2019: Amazon US / Amazon UK). Further, he argues that by keeping honey bees in a way that respects their needs, we can reduce the frequency of disease outbreaks that they are prone to, and reduce the chances that these diseases may spread amongst native wild bee species.

Cover for The Lives of Bees: The Untold Story of the Honey Bee in the Wild by Thomas D. Seeley and published by Princeton University Press (2019).

This interesting and readable book is both personal and scholarly as Professor Seeley recounts his studies of honey bees. Professor Seeley relies extensively on his lifelong investigations into wild bees — a passion that began when he was 11 years old — and uses rigorous scientific research to develop eleven chapters covering a number of important cultural, historical and natural history topics, including honey bee nests, colony reproduction, colony defense, food collection, temperature control and the annual cycle of honey bees.

I was particularly interested to learn that Professor Seeley thinks honey bees are not truly domesticated, especially in the way that dogs, cattle and maize are domesticated. “As a rule,” Professor Seeley writes, “the process of domestication produces organisms with traits that enable them to thrive in environments managed by humans but cause them to struggle in the wild” (Seeley 79). Instead, Professor Seeley argues that honey bees are semi-domesticated, and reminds his readers that throughout recorded history, humans have domesticated animals by manipulating their environments and by changing their genes. On one hand, we have managed to manipulate honey bees’ environment through the nearly universal adoption of artificial beehives designed to enhance honey production, but we’ve not changed honey bee genes very much. Although Professor Seeley does note decisive successes in selectively breeding honey bees for hygienic behaviors that improve resistance to devastating diseases such as American foulbrood, chalkbrood, and tracheal and Varroa mites, and also to enhance alfalfa pollination behaviors, he notes that “there is no evidence that artificial selection has altered in any general way the behavior of honey bees” (Seeley 91). He further points out that there are no distinct breeds of honey bees, indicating “that, in many (perhaps most), places, the genetics of honey bees is shaped far more by natural selection for traits that boost the genetic success of colonies on their own than by artificial selection for traits that can boost the profits from colonies owned by beekeepers. This explains why it is that honey bees do not need our manufactured hives, and instead are still perfectly at home in a hollow tree” (Seeley 93).

But the crux of Professor Seeley’s book is the final chapter, Darwinian Beekeeping. In this chapter, Professor Seeley summarises and reviews important differences in living conditions between wild and managed colonies that he described in his book. He argues that typical beekeeping practices are often stressful to the bees, and thus, can cause disease. In this chapter, Professor Seeley lists 14 ways that responsible beekeepers can change their practices to improve the overall health — and the lives — of their bees, so these insects can continue to pollinate our food crops and manufacture the honey that so many of us love.

Not only is this scholarly book accessible and well-written, but Princeton did a superb job producing it. It’s printed on heavy paper that will provide bibliophiles with intense pleasure to touch, to hold, and to read. The book features full-color photographs and graphics embedded throughout. The diagrams, charts and tables are placed within the text so they most effectively complement the discussion of various topics. At the end of the book, there are considerable notes for each chapter, followed by an exhaustive list of references that will be very useful to scientists and to beekeepers in particular. Although the casual reader might suffer information overload (or they may discover a new passion), The Lives of Bees will be much-prized and often referenced by scientists and beekeepers alike, and will fascinate anyone who wishes to learn more about the lives of these amazing insects.

Thomas Seeley has written 4 other books, 1 newspaper article, and over 175 scholarly publications. In 1997, a new species of bee, Neocorynurella seeleyi, was named after him. He received the Gold Medal for the Best Science Book, (The Wisdom of the Hive, 1998), was awarded the Alexander von Humboldt’s Senior Scientist Prize in 2001 and was elected a Fellow of the American Academy of Arts and Sciences that same year. In 2017 he was awarded fellowship to American Association for the Advancement of Science.

The Lives Of Bees: What Were Honeybees Like Before Human Cultivation? | @GrrlScientist

Iceye to launch three SAR satellites on SpaceX rideshare flight
Cannabis Abstinence Is Tied To More Alcohol Use For Teens And Young Adults, Study Finds
How You Can Soon Be One Of The Select Few To See North America’s First Eclipse Of The Sun Since 2017
Big in 2021: American jobs created by EV companies
Transporting and concentrating vibrational energy to promote isomerization