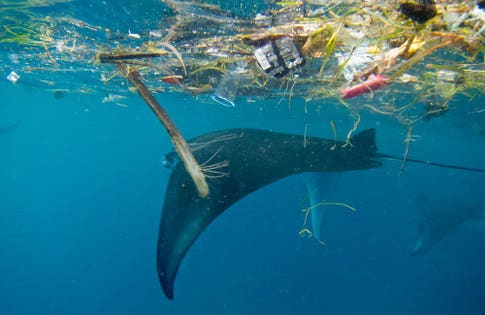 After the broadcasting of the BBC’s Blue Planet II, ‘plastic pollution’ was on everybody’s lips – including the Queen’s!

Being downstream from most land means our oceans tend to be the dumping grounds for a significant amount of plastic waste produced. Plastic pollution is when plastic has gathered in an area and has begun to negatively impact the natural environment. What may surprise people is that it is not a new problem- in fact, plastic pollution was first noted in the late 1960’s and early 1970’s by scientists who were studying plankton! And since the upper parts of our ocean are the easiest to access and therefore study, most of our scientific attention has been turned to the plastic we see. Many often forget that many sinks to the bottom, even all the way down to the deepest parts of our oceans, like the Marianna Trench!

Plastics, with time, break down into small pieces (called ‘microplastics’ if they are less than 5 mm). But plastics don’t just disappear – the sunlight and seawater will eventually make an object brittle, having it break down and be available to all in the food chain. Here, it can starve animals through ingestion, being mistaken for food and taking up space in stomachs hungry for meaningful sustenance. Many of us have seen the videos of various animals being dissected only to find plastic bits and rubbish (such as plastic bags, bottle caps, lighters, straws and more) filling up their stomachs. It isn’t just large animals who ingest this junk, but even small zooplankton.

The ingestion of plastic by sharks is understudied. But a study in 2002 found 28,687 large sharks were caught between 1978 and 2000 in the nets that protect users of the popular swimming beaches of KwaZulu-Natal, South Africa, against sharks. Over this 23-year period, a total of 60 sharks (0.38% of those with recorded stomach contents) had ingested plastic debris, the most common items being packets or sheets. Of these, 38 individuals were tiger sharks (Galeocerdo cuvier). In 2013, a study looked at plastic pellet ingestion fish, finding that the rate of plastic ingestion by the Brazilian sharpnose shark (Rhizoprionodon lalandii) was at 33%. Ingested plastics may block digestive tracts, damage stomach linings, or lessen the need to feed in these animals, causing them to ultimately go hungry.

And it isn’t just a problem for sharks that like to sink their teeth into the stuff. Researchers found that filter feeding sharks and mobulid rays are especially vulnerable to microplastic pollution. Filter feeding means these animals get their food by moving through the water with their mouths open and consuming large quantities of both water and food, ultimately straining the small prey from the water. But what they may also be straining is plastic-associated toxins, such as heavy metals and phthalates.

“Exposure to these plastic-associated toxins pose a major threat to the health of these animals since it can alter the hormones, which regulate the body’s growth and development, metabolism, and reproductive functions, among other things.” Professor Maria Fossi of the University of Siena in Italy told BBC.

Ingestion isn’t the only way to die by plastic. Animals can become entangled in plastic loops of debris, making it difficult to properly swim, catch food or avoid predators… or, possibly worse, make it so they ultimately drown. That same 2002 study found 53 sharks (0.18% of the catch) with polypropylene strapping bands around the body. Many animals can also get caught in discarded fishing gear, which is the biggest source of plastic in our oceans. These marine animals can also get wounds, such as deep cuts, from this plastic which can lead to infections.

Plastic pollution is something many can easily see, and therefore people have come forward with solutions to this problem. The Ocean Cleanup is by far the most talked-about proposal, with experts saying it isn’t a “magic solution” to the root of the plastic pollution problem: people.

While it is good to keep tabs on your personal plastic use (such as not washing with soaps that have microplastics in them, recycling, being more conscious of what you buy, etc.), it is not only up to the consumers but the companies to phase out products containing microplastics and re-think their plastic production. Ocean conservation agencies need to also continue educating the general public about the issue of plastic pollution.

As author David W. Laist said in a 1987 study about plastic debris in the marine environment: “The deceptively simple nature of the threat, the perceived abundance of marine life, and the size of the oceans have, until recently, caused resource managers to overlook or dismiss the proliferation of potentially harmful plastic debris as being insignificant.”

And while plastic pollution is not the biggest threat against sharks (unsustainable overfishing and bycatch is by far a greater problem for these animals), it is no longer an insignificant ocean problem.

Coronavirus calls us to share more than ever. Here are 10 ways to get started
Coronavirus, cheap natural gas and building electrification
NYC Mayor Bill de Blasio orders investigation of Amazon’s firing of strike organizer
Atlassian’s Confluence gets a new template gallery
Brent crude could still drop to $10 a barrel and stay there in Q2: IHS Markit