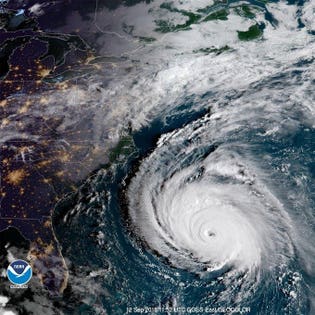 As an expert within the field of meteorology, I have been fielding calls from media much of the day about Hurricane Florence. A recurring theme of my response has been how strange the storm is from a meteorological perspective. I have 3 degrees in meteorology from Florida State University, served as President of the American Meteorological Society, was a research meteorologist at NASA, and currently serve as Director of the University of Georgia Atmospheric Sciences Program. In my 27 years of professional experience, I have never seen some of the projected characteristics or behavior of Hurricane Florence.

One of the unique aspects of Hurricane Florence is the sheer size. It is a large storm. It has been estimated to be roughly 500 miles in diameter. In the graphic above, the storm is larger than the states of Florida, North Carolina, South Carolina and Georgia, respectively. For this reason, it is important to not become too locked on the exact location of landfall. There will certainly be significant impacts near the eye of the storm, but the footprint of Florence will cause impacts over a wide area.

The storm is also unusually strong for a hurricane at this latitude. According to a tweet by Colorado State University hurricane expert, Dr. Phil Klotzbach, Florence is has the lowest pressure (943 mb) that far north since Hurricane Sandy. In fact, only 5 major (category 3 or greater) hurricanes have made landfall in North Carolina since 1851 according to Dr. Klotzbach: Great Beaufort-1879, San Ciriaco-1899, Hazel-1954, Gloria-1985 and Fran-1996. Helene (1958) and Emily (1991) were major hurricanes but did not officially make landfall.

Like Hurricane Harvey (2017) and Hurricane Lane (2018), Florence also has the potential to be a life-altering rainfall event. The graphic above from NOAA’s Weather Prediction Center shows the potential for 2 to 3 feet of rainfall (feet not inches) in the coastal North Carolina region, and 1 to 2 feet of rainfall in South Carolina and inland regions.  The excessive rainfall is related to the unorthodox track that forecast models are projecting for Hurricane Florence. Common words that meteorological colleagues have been using to describe the track  include “unprecedented,” “remarkable,” and “never seen before.” Track forecasts have the storm approaching the coast near North Carolina then slowing to a stall as we saw with Hurricane Harvey. Next something even more extraordinary happens. Some models have the storm paralleling the coast in route to South Carolina and coastal Georgia before perhaps another landfall. Meteorologist Ryan Maue of weather models.com explained this the meteorological processes at play in a Tweet:

Why is Hurricane #Florence getting stuck? Ridge to the east — ridge to the north — ridge to the west. Where to go?…..Storm waits for an opportunity or a weakness in the ridges — and takes it. Pushed south (!) to Savannah and then westward through Georgia.

This stall and “parallel coast” scenario (even with a weaker storm) creates a sustained barrage of wind, storm surge, and rain for the coastal regions.

The storm stalls because steering currents are projected to be weak as the storm approaches landfall. It is important to understand that the late uncertainty associated with the weather models and Florence is not an indictment on our skill. Track forecasts are typically pretty good these days and have been with Florence. National Weather Service -Seattle meteorologist Jacob DeFlitch used data provided by the National Hurricane Center and a Geographic Information System (GIS) to produce the map below. It reveals that National Hurricane Center forecasts have been pretty solid. This trend is likely to continue until the storm approaches landfall and then steering currents weaken. At the end of the day, the “uncertainty” is more about the “strangeness of Hurricane Florence” and its future environment rather than deficiencies in our meteorological knowledge. As an academic, I suspect a few Master’s theses or Doctoral dissertations will come from Hurricane Florence (2018).

Hurricane Florence has even been interesting from the perspective of lightning. Global meteorological instrument provider Vaisala collects global lightning data. According to a company spokesperson, their network has detected more than 54,000 strokes within Hurricane Florence since September 10th. As typical of previous studies, the outer rain bands (see graphic below) are most electrically-active, but lightning in the eyewall can be an indicator of intensification.

As I told an Associated Press writer earlier today, Hurricane Florence is a strange bird. It is also a headache for meteorologists and decision-makers. A couple of  meteorological scenarios are still possible, at the time of writing, but decision-makers often want “yes” or “no.”