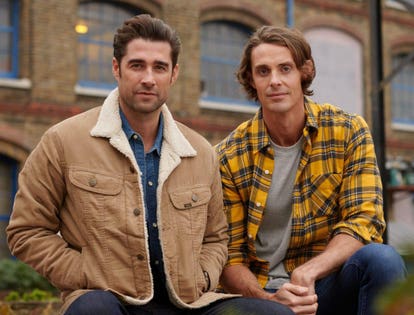 The Naked Professors are Matt Johnson and Ben Bidwell, on a new podcast addressing mental health.  TV presenter and mental health ambassador Matt Johnson sits alongside life coach and writer Ben Bidwell to bring open and relatable conversations about mental health, mindset and personal growth. The Naked Professors represent the new breed of masculinity by stripping things back to have deep and vulnerable discussions about what is most important in life and how we actually feel.

In a refreshingly candid and honest conversation, Matt and Ben talked to me about the podcast, and about their own experiences and stories of mental health, and why this matters so much to them. Ben worked as a chartered surveyor, had lots of friends and a good income. He tells me that he had a good life, but often felt dissatisfied, and uninspired. He was trying to adhere to an image of himself that he thought that society wanted to see. He wanted to ‘be a man’ which meant not showing any vulnerabilities and insecurities. Then Ben started his own tech company. Loneliness is a huge problem for entrepreneurs, and something that we often do not talk about. He tells me that there is not much awareness of the isolation faced as an entrepreneur. He realised that he was trying to live an idealistic notion of what success meant, and conform to society’s view of what a successful man looks like.

Matt has been a television presenter since 2009. It was in 2013 that Matt first spoke openly about his battle with depression and his attempted suicide in 2009. It took courage to stand up in the limelight and share his innermost fears and emotions in the public eye. Since then he has been on a journey to find out how to look after his mental health, and is now an ambassador for the mental health charity MIND.

Then Ben and Matt were brought together through a chance meeting on a flight to Ibiza, and the two hour conversation around vulnerabilities made them realise that there was a need for a more open and honest platform where any superficial layers could be stripped back to the basic, and this idea of a honest podcast took roots.

Ben is keen to redefine the notion of what a man is and what being manly is all about. Both him and Matt share their experiences of how from a young age boys are not taught to talk about emotions. In the current age of #MeToo and the growing discussion around toxic masculinity, there is an increasing need to reevaluate how we are raising our boys, and whether men are being given the space to speak from their heart rather than just from their head. In my facebook group on feminist parenting, parents are keen to share their experiences of how to raise boys who do not feel the pressure to conform to a societal stereotype of gender, where they can be comfortable in their own skin, so that they grow up to be feminists, and allies in this struggle for gender parity. Matt and Ben both believe, from their own experiences, that vulnerability is our biggest strength.

Through their podcast, Matt and Ben want to make love, compassion and empathy “cool”, where men can speak openly and honestly about feelings, about fears and about their emotional experiences. Their guests are often the traditional “alpha males” but in warm, funny and candid conversations they open up to share their raw emotions.

Here is hoping that The Naked Professors will be one huge step towards creating a new breed of role models, where men can see that it is ok to be open and honest about mental health, and that it is not a sign of weakness to show vulnerabilities and fears.

New York and Boston maintain their lead
These are the 4 most promising worlds for alien life in our Solar System
Big potential, but challenges to overcome: A look at offshore wind in the U.S.
The US National Academy of Sciences can now kick out harassers. So why hasn’t it?
ByteDance says it will own 80% of TikTok Global, contradicts Trump’s claims deal has ‘nothing to do with China’