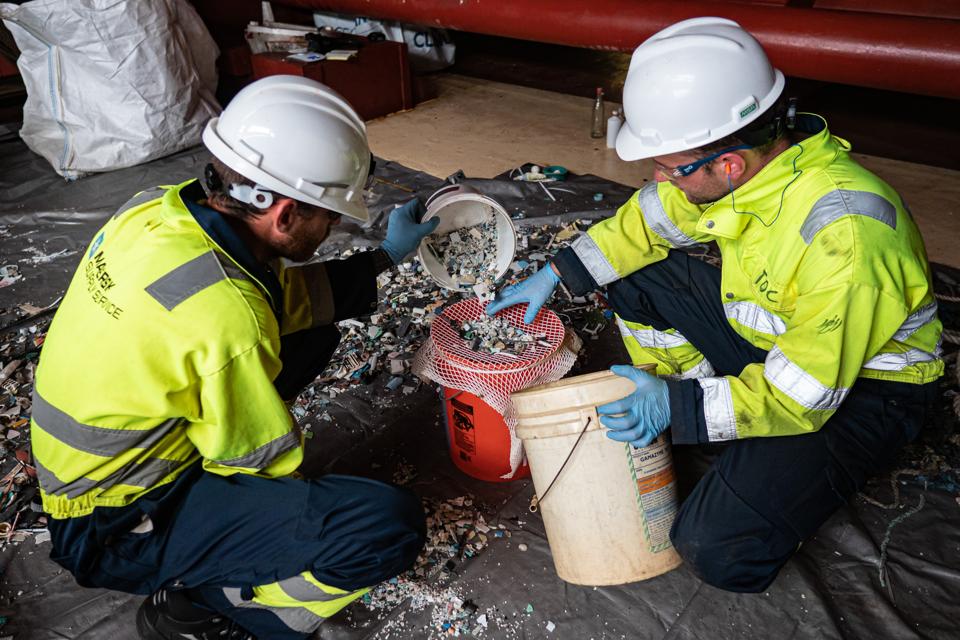 Organizers of The Ocean Cleanup have spent years trying to get a system up and running to collect floating plastic from the Great Pacific Garbage Patch, the largest accumulation zone of plastic in the world’s oceans. They now say a System 001/B is doing the job, and has been collecting a range of plastic debris using the natural forces of the ocean to catch and concentrate the garbage.

The system is the second attempt by the nonprofit, which began its journey seven years ago at a TEDx conference where the concept was presented by CEO and Founder Boyan Slat. And that means while the group is celebrating, they’re also ready for more setbacks, or as Slat likes to call them: “unscheduled learning opportunities.”

“Something like this has never been done before,” Slat said during an Oct. 2 press conference from Rotterdam in the Netherlands. “The path of progress wasn’t exactly a straight line.”

Slat says he and his team are proud to share that plastic is being captured, while also noting that the latest update means a System 002 is now being designed. He and others on the team say they’re not sure when that System 002 will launch, but hope to have more details in a few months.

The Ocean Cleanup is essentially a big rake that picks up floating plastic. System 001 (aka Wilson) was launched from San Francisco, California, in September 2018, then later brought back when another “unscheduled learning opportunity” happened in the form of an 18-meter end section of the boom that broke off due to a fatigue fracture.

System 001/B was launched in June from Vancouver, British Columbia, and earlier reports showed promise, with tweaks that included a giant parachute anchor to create drag, slow down the system and let winds and waves push in the plastic. The last hurdle was “overtopping,” where plastic overtopped a screen meant to retain it. That issue was addressed by using buoys to make the screen stick out higher above the water.

Slat said during the Oct. 2 announcement that doesn’t have data to share on how much plastic has been captured by System 001/B so far.

“The objective of this first system wasn’t to collect as much plastic as possible,” he said, but to prove the principles of the project and using the natural forces of the ocean to collect trash.

“We collected quite a lot of plastic,” he added.

But he said the system is collecting all kinds and sizes of plastics, from medium-sized debris all the way down to microplastics as small as 1 millimeter. Much larger ghost nets associated with commercial fishing also have been removed by the system.

“Now that we have these conclusions, they really have given us sufficient confidence to start the next phase of the development and work toward System 002,” Slat said, adding, “If the journey to this point has taught us anything, it’s that this is not going to be easy.”

The main element to tackle in getting System 002 out on the ocean is survivability, to design a system that can stay in the water in year-round conditions and for long periods of time, so the plastic doesn’t have to be harvested too often using vessels that cost money to send.

“Right now the plastic is really able to stay in the system for days, possibly weeks,” Slat said, “but we have to go for months or even more than a year to make the economics work.”

Lonneke Holierhoek, the cleanup’s chief operating officer, said System 001/B will remain in the Great Pacific Garbage Patch through the end of November to gather more information for the next stage in the project. It’s headed back now for a crew change and plans to concentrate near-future efforts in collecting plastic in high-density areas of the patch.

“We expect more challenges, more unscheduled learning opportunities and even more surprises, but our team has proven to be steadfast and very resilient which gives us full confidence for the future,” Holierhoek said, adding thanks to long-term partners including the Dutch government and Maersk.

Slat recalled his idea being dismissed and ridiculed by some when it was first proposed, and some remain skeptical of the project.

They include Marcus Eriksen, research director of the 5 Gyres Institute.

“All global environmental problems, like the hole in the ozone layer, smog over cities, or tar on the ocean surface, were all solved by an upstream policy solution, and that’s what it will take to solve the plastic problem,” Eriksen said in response to the announcement. “We need to use good science to see beyond the distractions.”

“It’s upstream vs. downstream, and this is the fight we’re engaged in,” he said in an email. “We need to move the narrative to prevention.”

“It’s exciting to hear that The Ocean Cleanup project has made some advances in their design,” Schwartz said. “However, my concerns remain the same as they have been since this project was first proposed.

“The Ocean Cleanup project, in both their methods and their messaging, ignores the fact that this is a 3-dimensional problem. Plastics on the surface of the garbage patches are important to address, but they represent less than 3% of the plastic that enters the world’s oceans every single year.

“Plastics are found everywhere—throughout the water column and on the ocean floor. Our focus needs to be on reducing and preventing the plastic that enters the ocean, while continuing to explore the possibility of long-term cleanup.”

“Funding is always going to be necessary. Even though we’re in a good situation now, working toward scale-up, we’ll need more help.”

He also mentioned vacancies the nonprofit is looking to fill and encouraged people to spread the word about the work.

“The more people that know about what we do, I think the higher probability of success.”