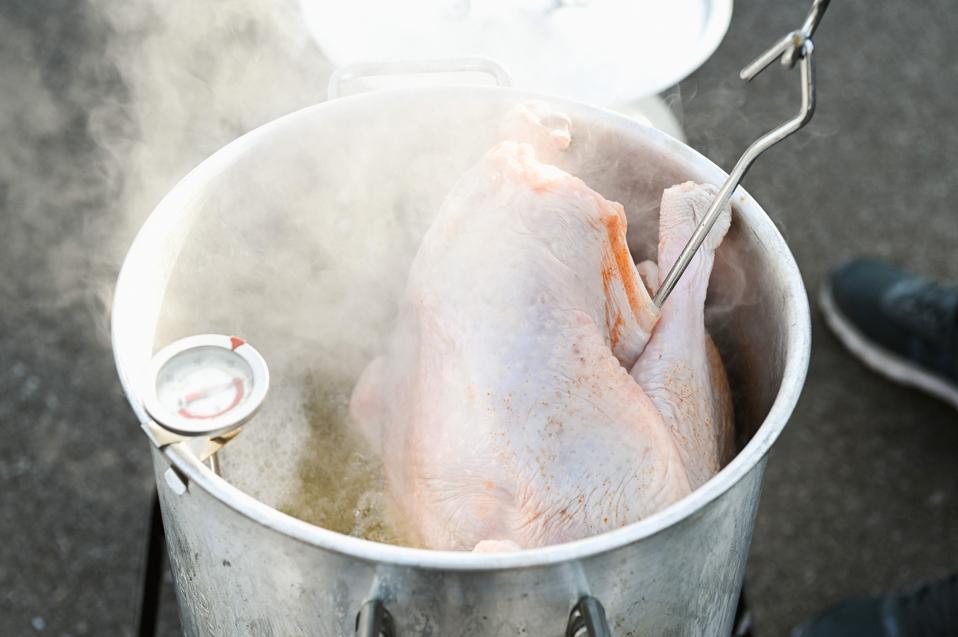 Every year, households all across the United States face a troubling dilemma with no good solutions: what should I do with my still-frozen turkey? Despite planning ahead for the annual Thanksgiving feast that’s become an American tradition, the classic centerpiece of the meal — the turkey — typically ranges between 15 and 20 pounds (7 to 9 kg), requiring three or more days to fully defrost in the refrigerator. A forgotten turkey, or one that’s been accidentally left in the freezer until it’s too late, poses a multitude of problems for hungry mouths on Thanksgiving day itself.

There are numerous ways to try and salvage a frozen turkey: thawing it in very cold, continuously-changed water; defrosting it in the microwave (if your turkey somehow fits in there); or cooking it for an extra long time at a significantly lower-than-normal temperature in the oven. In recent years, it’s become more and more popular to deep fry a Thanksgiving turkey, but if your turkey remains frozen, it’s a recipe for disaster. Here’s the physics of why you must never deep fry a frozen turkey.

Deep frying is a simple method for cooking with lots of benefits. Unlike the traditional oven-roasting, where heated air externally cooks whatever you put into the oven from the outside, deep fryers work by submerging your food into an extremely hot liquid: oil. Whereas oven-cooking runs the risk of drying out your meat around the outside while taking extremely long time to cook the interior meat nearest the bones, deep frying keeps all of the meat moist and juicy while taking only a fraction of the time that roasting does.

But deep frying requires a deep fryer, and unless you’re making Thanksgiving from the comforts of a restaurant or other commercial kitchen, odds are that you don’t have one large enough to handle something as large as a turkey. The way around this is to set up a large pot full of oil in a well-ventilated area (such as outside), where you can put a heating element of substantial power (i.e., a gas-powered device) underneath it. Heat the oil to a very high temperature, drop your pre-seasoned or pre-brined food into it, and let the deep fryer do the work.

This will work just fine so long as you take three basic safety precautions.

The first two steps are obvious, but the third one is more subtle. Clearly, if you are going to have an open flame or an extremely hot heating surface, putting a flammable material like cooking oil directly onto it is a near-certain way to start a grease fire, so ensuring that it doesn’t overflow is critical. Also, if a very hot surface or an open flame tips over, it has the potential to start a very large fire, particularly if it’s indoors or near other material that could easily catch fire.

But what surprises many is that simply putting a frozen turkey into the oil, all on its own, can create an enormous danger.

Think about what might happen in two separate scenarios. If your turkey is completely thawed, you should be able to immerse it slowly into the hot oil without too much trouble. The instant the turkey hits the oil, the water content of the turkey will begin to boil, as a typical oil’s temperature of 350 °F (175 °C) is well above the temperature at which water boils. This means that the water, upon coming into contact with the oil, will begin boiling almost instantly, turning into steam.

Lowering the turkey slowly and steadily into the oil is how you keep this from becoming a problem. Only the external surfaces of the turkey — the components that routinely touch the air before immersion — will immediately boil, which will give off a tremendous amount of steam and rising heat, so make sure your hands aren’t, say, holding the turkey legs directly as you lower its body into the oil. So long as you don’t lower the turkey into the oil too quickly, you won’t have a problem, and once the turkey is completely submerged, it should cook quickly, with the exact cook time dependent on the turkey’s total weight.

But what about the other scenario: if your turkey is still frozen? This is a problem, even for a turkey being lowered slowly and steadily into the oil exactly as before.

The instant the turkey hits the oil, the solid ice has to begin melting before it can become water. Once the ice melts, you’ll have exactly the same situation as the earlier scenario: the water, surrounded by large amounts of ultra-hot oil, will heat up rapidly, boiling and turning into water vapor (steam) almost instantly.

If you were just to drop some cubes of ice into a deep fryer filled with pre-heated oil, you’d probably be fine. Ice is not only less dense than water, but is less dense than oil, too. The oil that touched the ice would rapidly melt it, heat-and-boil the water, but only a few drops of oil should ever be kicked up into the air. (This is part of the reason why deep fryers have lids!) But turkeys, like most animals without air trapped inside of their bodies, are denser than oil, meaning that they’ll sink.

This is where the key problem arises. If you have a frozen turkey and begin lowering that turkey into a very hot bath of oil, here’s what’s going to happen.

And that’s where disasters happen.

From a physics perspective, it’s all but inevitable that catastrophe will ensue. Once the first splashes of oil go over the side, a fraction of these small droplets will unavoidably land on or near the heating element/open flame. A small droplet will heat up extremely quickly, igniting and bursting into flame itself. If there are larger amounts of oil nearby, the flame travels more quickly through the oil than the oil falls through the air towards the ground; neighboring droplets will catch fire, resulting in what could best be described as a fireball.

With large amounts of fire, a nearby propane tank, and a vat full of flammable (or potentially even combustible) oil on hand, this can quickly become a house-threatening, life-threatening, or even neighborhood-threatening inferno. Even if you take all of the proper precautions, it’s very smart to keep a fire extinguisher nearby for easy access, just in case you need it.

You might think you’ll be fine so long as your turkey is partially defrosted: if there are no ice crystals on the outside. This is not the case at all, and thinking along these lines will only give you a false sense of security. A partially frozen turkey will still have the ice problem, and you can find this out for yourself in the most straightforward manner possible: simply by sticking your hand into the insides of the turkey.

If you feel any ice crystals, your turkey is still frozen. The crystals don’t need to be on the outside to create a disaster; the ice simply needs to come in contact with the oil once the turkey is at all beneath the oil’s surface. The same effects that were described earlier — of ice melting, of water sinking and rapidly heating, turning to gas, expanding, and causing the oil to boil over and potentially start a fire — will all occur with a partially frozen turkey just as easily as with a completely frozen one.

If you want a deep fried turkey, then, but you don’t want to risk spilling oil over the sides and starting a fire, what’s your best bet? First, you should absolutely make sure your turkey is entirely defrosted beforehand: 24 hours in the freezer for every 4 to 5 pounds of weight is completely sufficient.

Next, you should measure out the amount of oil you need as follows: by putting the (thawed) turkey into the (empty, unheated) pot, filling the pot with water until it’s at a desired level (with the turkey completely covered but with plenty of space between the water level and the top of the fryer), then removing the turkey. The amount of water that’s left in the pot you’ll be using to deep fry the turkey is the level to which you should fill the pot with oil once it’s been emptied and dried.

Finally, you can take those critical final steps:

Yes, you can still deep fry a turkey for Thanksgiving. Yes, you can safely apply a dry rub. Yes, you can brine your turkey beforehand. And yes, you can safely deep fry an entire thawed turkey so long as you follow the proper procedure. Remember that you are dealing with extremely hot oil, and this can burn you severely. Wear long pants and long sleeves, as well as the always-necessary oven mitts and close-toed shoes. You may want to consider protecting your eyes as well, as tiny drops of superheated oil can cause burns and scars that last a lifetime.

As spectacular as a large grease fire is, your family, your neighbors, and your local fire department will all be thankful that you didn’t burn yourself or your property or others on this celebratory occasion. No matter how you enjoy the holiday or any other turkey-cooking event, do it safely and responsibly. That means learning the simple lesson that I hope no one feels the need to repeat for themselves: never deep fry a frozen turkey.