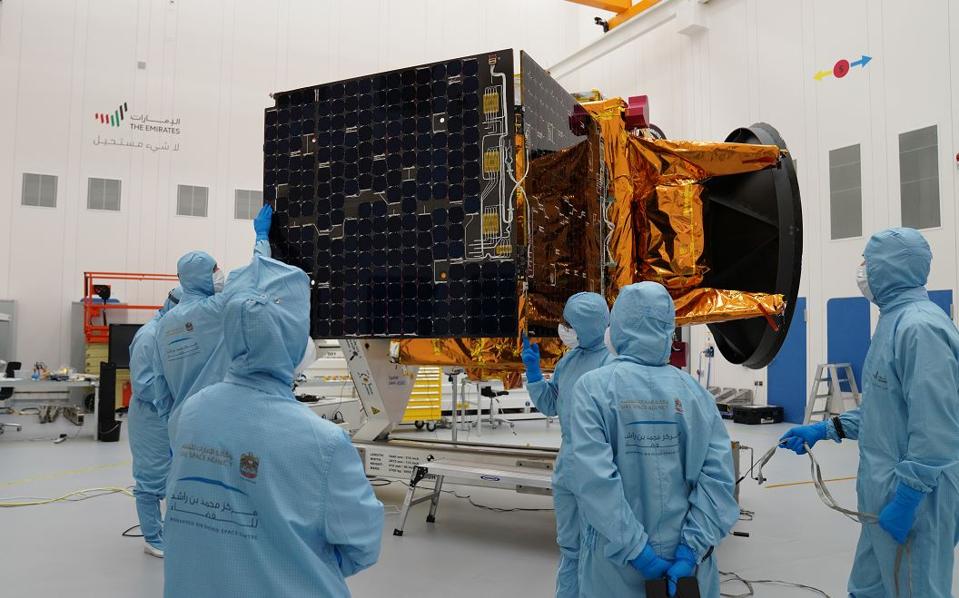 When you think of space-faring nations, a few obvious names spring to mind. America, of course, and Russia. China too, and perhaps Europe and Japan. Maybe India as well.

And… the United Arab Emirates?

If they weren’t on your radar, they probably should be. Tomorrow, Tuesday, July 14, at 4.51 P.M. Eastern Time, the UAE will see its first-ever mission to Mars launch, and indeed its first interplanetary mission, called Hope.

The $200 million spacecraft will launch on a Japanese H-2A rocket from the Tanegashima launch centre in Japan. You’ll be able to watch live here.

“It’s a two-Earth-year science mission,” says Omran Sharaf, the project lead on the mission. However, the spacecraft has been designed to last up to four Earth years. “Depending on the results that we get at the end of two years, we will decide on how we will extend the mission,” says Sharaf.

The scientific goals of the Hope spacecraft, more broadly known as the Emirates Mars Mission, include studying the Martian weather. Billed as the first Martian weather satellite, the spacecraft will monitor weather during a Martian day from an inclined orbit that will afford a variety of views of the surface.

Its orbit will take the spacecraft between 20,000 and 43,000 kilometers of the surface, completing a revolution of the planet once every 55 hours. The UAE says the inclination of the spacecraft, 25 degrees above the Martian equator, is the first of its kind around Mars.

Using its three onboard instruments, the spacecraft will study hydrogen and oxygen present in the upper regions of the Martian atmosphere. It will also aim to see how the Martian weather drives atmospheric loss, which may help explain how the Red Planet lost most of its atmosphere over the last few billion years.

The spacecraft will also look to monitor dust storms and ice clouds on Mars, and get a better picture of how the Martian seasons change. “It’s the first time the scientific community will be able to get a holistic view of the Martian atmosphere at different times of the Martian day, and different seasons,” says Sharaf.

While there are scientific goals for the spacecraft, there’s a broader goal for the Emirates Mars Mission too. The UAE hopes that the mission will help the country move on from an oil-driven economy to one that embraces science.

“One of the reasons for the mission being established in the UAE is to feed into the diversification of its economy, and develop expertise in science and technology,” says Sarah Al Amiri, the science lead on teh mission.

The mission was first conceived back in 2014, with the goal of reaching Mars by December 2021. And that is no easy feat, considering the UAE only has limited experience of operating satellites in Earth orbit before with its DubaiSat-1 and DubaiSat-2, launched in 2009 and 2013.

That’s not to say the UAE has gone it alone, however. Aside from launching on a Japanese rocket, it has also relied on NASA’s expertise to help design the mission – including using the U.S. space agency’s Deep Space Network (DSN) to communicate with Hope when it is far from Earth.

“We have an international science team on board of the mission with people from France, the U.S., all working together on this programme,” says Al Amiri. “The approach of this country, created less than 50 years ago, is to learn rather than reinventing the wheel. And that has also been our approach when it came to planetary exploration.”

There are some interesting opportunities for collaboration at Mars, too, with other satellites that are already orbiting the planet – such as NASA’s MAVEN spacecraft and the European Space Agency’s Trace Gas Orbiter. “This is a conversation [we’ve started] in our science team,” says Al Amiri.

Hope is not the only mission launching to Mars this year. In the coming weeks, it will likely be joined by NASA’s Perseverance rover – our most detailed search for life on Mars yet – and China’s Tianwen-1 orbiter and rover. While perhaps less ambitious than its companions, Hope is an important mission nonetheless.

And the UAE’s ambitions for its space programme do not end with the Hope spacecraft. The country has talked about establishing a human settlement on Mars in 2117, while there will likely be further interplanetary missions in future.

“We’ve always worked on another [mission] as one has been ramping down and getting ready for launch and operation,” says Al Amiri. “That’s going to be the same approach for planetary missions. Hopefully [the next mission] will be announced in due time.”

Until then, there’s the small matter of getting to Mars to worry about. And tomorrow, the UAE could join an exclusive club of nations that have successfully sent a spacecraft to Mars, a major statement of its future intentions.

Next Steps Taken Toward the Future of Particle Physics in Europe
Kids need to spend time alone outdoors to really bond with nature, study finds
Trump’s ban of Chinese apps has lots of precedent in other countries, and Apple and Google comply
Massive Power Outage Briefly Knocks Out Northern Manhattan, Delaying Trains
‘We’re in one of the cataclysmic times of change’: first female NSF director on discrimination and COVID-19