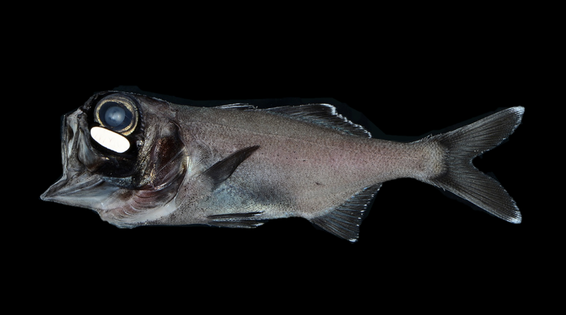 The bioluminescent ‘flashlight fish’ (Anomalops katoptron) is equipped with a specialized light organ under each eye. These organs are home to light-releasing bacteria which give off a ‘blink’ of light at the discretion of the flashlight fish.

The flashlight fish is not alone in using bacteria as light factories. Similar organs housing bioluminescent bacteria are found in deep sea anglerfishes and ponyfishes, too. In fact, a 2016 study reports bioluminescent capabilities have evolved at least 27 separate times among fishes alone.

A new discovery sets these flashlight fish apart from many other bioluminescent fishes: the flashlight fish uses its light-flashing bacteria for schooling in the dark. Schooling, or synchronized swimming, requires fish be able to spot one another for coordinated group movement. Accordingly, most fish schools disband when light levels are low – but this is not the case for the flashlight fish.

According to a new study led by researchers at the American Museum of Natural History and the University of Rhode Island, flashlight fish use their bioluminescent ‘blinkers’ to coordinate nighttime schooling.

“It was simply astonishing,” says Dr. John Sparks, Research Associate at the Museum and Professor of biology at Baruch College. “We observed thousands of flashlight fish using synchronized bioluminescent flashes to coordinate their movement and facilitate schooling behavior in complete darkness, a behavior and function that had not previously been reported for bioluminescence.”

During the day, nocturnal flashlight fish rest in shallow caves. But come nightfall, the flashlight fish descend to depths of up to 1200 feet and form groups. Using a submarine and SCUBA divers equipped with low-light cameras, researchers collected footage of flashlight fish off of the Solomon Islands.

The footage collection was no small feat. “Everything had to come together to get these data–the new camera system, the weather, the divers, and, of course, the fish,” explains Dr. Brennan Phillips, Assistant Professor of ocean engineering at the University of Rhode Island and a coauthor of the study. “It was one of the hardest challenges I have faced as a marine roboticist.”

The hard work came with great reward. One of the schools captured was made up of over 1000 fish - the largest aggregation of flashlight fish ever recorded.

A group of flashlight fish at night, illuminated by artificial light.

Interestingly, the footage showed that not all members of the school actually use their blinkers, perhaps to make the group less visible to potential predators. In fact, the researcher’s modeling analysis concluded that less than 5% of the flashlight fish need to be blinking to maintain the structure of the school.

“Our finding reveals a completely novel function for bioluminescence in the ocean, and shows that fishes are able to school using only the natural light they emit, without the need to rely on ambient light,” explains Sparks.

Describing his flashlight fish encounters as “truly extraordinary,” Phillips hopes his team’s research will inspire more studies of the novel flashlight fish in the future.