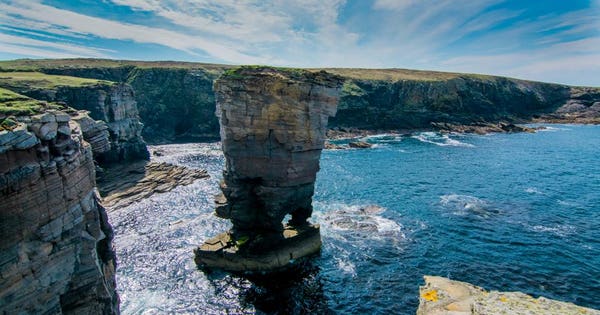 Tucked away in Scotland’s far north is an archipelago steeped in history, its’ sandstone cliffs holding the secrets of Neolithic settlements, Viking raids and… renewable energy?

Orkney is the only place in the United Kingdom that generates its entire power supply from clean energy and has become one the most promising sites for low-carbon energy research in the world. Made up of seventy islands of which less than a third are inhabited, the 22,000 Orcadians who call the island group home long had to rely on the Scottish mainland’s coal and gas power plants for its energy. In 1980, the UK government decided to invest in wind power, designating Orkney as the first place to trial the new alternate power source. Across the British Isles uptake of wind energy was slow, but Britain wasn’t the only European power keen on testing the merits of renewable energy.

Coastline of the Orkney Isles in Scotland, which is harnessing its strong winds and powerful currents to generate renewable energy.Getty

Enter Denmark and Germany, who decided to invest millions into developing their own wind energy programs, leading the push for renewables – until now. Today, Orkney is home to 700 micro wind turbines producing over 120% of their electrical needs, the archipelago has become a poster child for sustainable development . The excess energy produced has led to a debate on how to appropriately use it. Although a cable connects to the mainland, it was designed to import energy to the islands and lacks the capacity to export all of the extra electricity generated. Many Orcadians have already traded in their diesel or petrol powered cars for electric ones, and several discussions were had regarding laying down new cables to the mainland to inject Orkney’s energy into the Scottish grid. But then they had an idea: why not turn it into fuel?

Hydrogen fuel has long been touted as the next big thing in alternative energy, it consists of splitting water molecules into their base components (oxygen and hydrogen), releasing the oxygen back into the atmosphere and storing the hydrogen gas as a liquid which can be used a fuel. Although a simple process, the sheer amount of energy needed to split water molecules is what has led to its slow development amongst alternate forms of energy. However, the excess energy produced by Orkney’s wind turbines has provided engineers with a rare opportunity to create and store hydrogen fuel on a larger scale than previously done before. The Surf ‘n’ Turf project in Orkney is the direct result of this, using the extra power on windy days. The energy used to produce the hydrogen is provided by the community-owned wind turbines on Shapinsay and Eday, two smaller islands in the archipelago that have a combined population of fewer than 500 people.

With the help of the European Marine Energy Centre (EMEC), Surf ‘n’ Turf endeavors to create and store hydrogen in large enough quantities to make it a viable fuel source for the ferries that provide the connection between Orkney and Scotland. EMEC has also been looking into the benefits of hydrogen fuel as a by-product of its own Orkney power project. Established in 2001, EMEC conducts leading research on ways to use waves and tides as a renewable energy source, and now counts a vast range of new technologies harvesting the ocean’s movements throughout the islands. The center has secured significant funds to increase the scale of its’ program with hopes that it could help produce enough power for 750,000 homes by 2020, with any excess energy being redirected to creating hydrogen fuel.

↪ Read also: 2018: The Electric Vehicle Revolution Is Alive In Barbados

Orkney’s improbable rise as a leader in renewable energy is emphasized by its relative isolation. Closer to the Arctic Circle than it is to London, it is nestled as far away as possible from the hustle and bustle of lowland Scotland. But in an age where the world becomes increasingly interconnected, success stories like Orkney are likely to become more prevalent, as Laura Watt explores in detail in her book Energy at the End of the World: An Orkney Islands Saga.

“When people think of future technologies or innovation, they assume it has all got to be happening in cities,” Watts said during a recent interview for The Guardian. “ But this revolution in renewable energy is being done in a place that lies at the very edge of the nation .”

Orkney is famous for its neolithic sites, but now renewable energy is making headlines.Getty

Buffeted by winds for thousands of years of human history, the coasts of Orkney are now putting pen to paper as they map out the future. Building on its past innovations in wind power, it has become one of the world’s leading hubs of renewable energy research and continues to take massive strides in marine renewables and zero-emissions fuel. With an increasing international push to decrease carbon emissions, Orkney is the model to aspire to and keep an eye on as it continues its journey into alternative energy sources and could serve as a template for other islands and cities looking to become more sustainable.