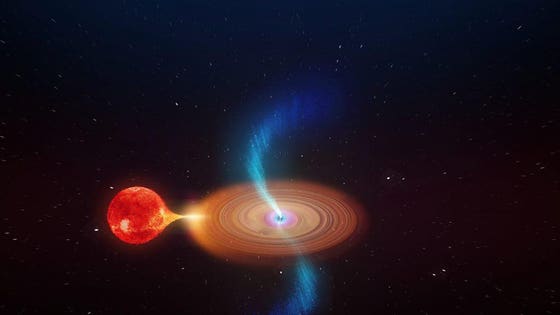 Astronomers have discovered a black hole that’s blasting out jets of plasma in all directions – because it’s spinning so fast, it’s warping spacetime around it.

It’s totally normal for a black hole to shoot out fast-moving material when it’s chewing up a companion star, as V404 Cygni is doing right now. The black hole is nine times more massive than our Sun and is consuming a star that’s about 70% the size of the Sun, so there’s a lot of matter and energy being thrown around.

Usually though, as the material from the unfortunately nearby star streams towards the black hole, its spin pulls it into a rotating accretion disk. Then, that disk becomes denser and hotter the closer it gets to the centre until either the innermost rim of the disk or the black hole itself has to vent and they launch jets of material away from the disk.

Artist’s impression of the inner parts of the accretion disk in V404 Cygni. The black hole rotates about a different axis to the binary orbit. As the spinning black hole drags spacetime around with it, the puffed-up inner accretion disk wobbles around like a spinning top. The jets launched from the innermost parts of the flow are redirected, either by the puffed-up inner disk or the strong winds being driven off it by the intense radiation.
(Credit: ICRAR)

But with V404 Cygni, something else is going on that’s sending those blasts off in all sorts of directions. Massive objects like black holes can distort space and time itself, according to Einstein’s General Theory of Relativity, and this black hole is doing just that.

Its spin axis is misaligned with the plane of its orbit with the companion star it’s making a meal of. That’s causing its gravitational influence to pull space and time around with it, an effect called frame-dragging.

“This is the only mechanism we can think of that can explain the rapid precession we see in V404 Cygni,” said James Miller-Jones of the Curtin University node of the International Centre for Radio Astronomy Research (ICRAR), who led a team using the National Science Foundation’s Very Long Baseline Array (VLBA), in a statement.

“You can think of it like the wobble of a spinning top as it slows down, only in this case, the wobble is caused by Einstein’s general theory of relativity. We’ve never seen this effect happening on such short timescales.”

The wobble is so pronounced that the usual method of observing black holes was useless, explained Alex Tetarenko, a recent PhD graduate from the University of Alberta and currently an East Asian Observatory Fellow working in Hawaii.

“But these jets were changing so fast that in a four-hour image we just saw a blur. It was like trying to take a picture of a waterfall with a one-second shutter speed.”

Instead, the researchers had to take 103 separate snaps of around 70 seconds and then stitch them together into a movie.

Now it’s time to see if similar behavior could be found in other objects.

“We were gobsmacked by what we saw in this system — it was completely unexpected,” said Greg Sivakoff of the University of Alberta. “Finding this astronomical first has deepened our understanding of how black holes and galaxy formation can work. It tells us a little more about that big question: ‘How did we get here?’”

Crew Dragon splashes down to end successful test flight
OPEC+ is facing a ‘very delicate, fragile balancing act’ in the oil market, strategist says
Japan’s ispace updates design of lunar lander
We have ploonets. We have moonmoons. Now hold onto your hats for… blanets
A CRISPR first produces squid as clear as glass