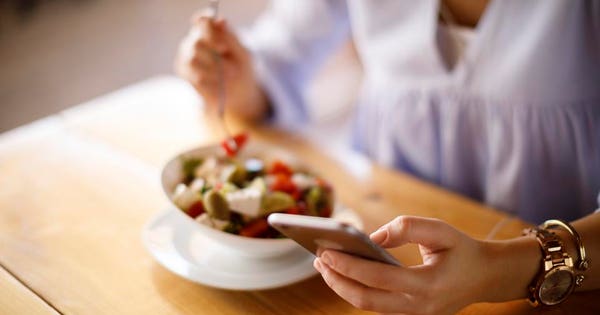 As tedious as it sounds, tracking what you eat and drink throughout the day can lead to significant weight loss. What most of us don’t realize is that this effective strategy doesn’t need to take much time at all.  According to a new study, less than 15 minutes of self-monitoring a day can help deliver life-changing results.

“People hate it; they think it’s onerous and awful, but the question we had was: How much time does dietary self-monitoring really take?” said lead study author Jean Harvey, chair of the Nutrition and Food Sciences Department at the University of Vermont. “The answer is, not very much.”

Researchers tracked the dietary self-monitoring habits of about 140 participants in an online behavioral weight-control program. For six months the participants met weekly with a trained dietician in online group sessions and also logged their daily food intake. Every time they logged in to record details about what they ate, they left a record the researchers used to track time spent against results.

They found that participants who lost 10% of their body weight (the most successful among the group) spent a little over 23 minutes per day on self-monitoring for the first month of the program, and by the last month they were spending just shy of 15 minutes.

But that improvement in time spent, though impressive, was not the main factor in the participants’ success, say the researchers. Instead, it was “brief but frequent” check-ins—the more the better—that enabled the most successful dieters to track their progress and check themselves throughout the day, every day, and drop pounds in the process.

“Those who self-monitored three or more times per day, and were consistent day after day, were the most successful,” Harvey said in a press statement. “It seems to be the act of self-monitoring itself that makes the difference–not the time spent or the details included.”

Specifically, the most successful participants logged in 2.7 times a day on average, according to the study, compared with 1.7 times on average for those who lost less than 10% of their bodyweight.

Since the study examined results from participants in a weight-loss program monitored by trained dieticians, the results may not necessarily be the same for everyone. But the principle of consistent self-monitoring (which, not incidentally, is the same principle at the heart of many journaling strategies) applies whether used in a structured program or without one.

Of course, to begin you need a goal and a plan for reaching it (decreasing calories and fat intake, for example). The researchers noted that many apps are available to both provide those starting points and track food intake throughout the day. If a smartphone is good for anything, it’s good for that.

“It’s highly effective, and it’s not as hard as people think,” added Harvey.

The study was published in the journal Obesity.

In Austria, a hydrogen train is set to travel on challenging alpine routes
Reverse and forward engineering of Drosophila corneal nanocoatings
Microsoft wants to take on Amazon in connecting satellites to the cloud
How One Unassuming Little Protein Makes Coronavirus A Killer
Hurricane Sally Is A Compound Flood Event – What’s That?