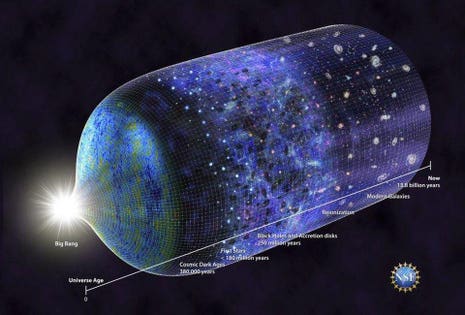 This obvious method not only works, but it remains the best way we have to calculate the Universe’s age even today. Yet it’s very easy to go awry, as there are many simplifying assumptions you can make that will give you an easy answer that isn’t necessarily correct, including errors that even a Nobel Laureate made earlier this year. Here’s how you, too, can figure out the age of the Universe.

The first place to start is with the expanding Universe itself and the one parameter we’ve strived to measure longer than any other: the Hubble constant. On the largest scales, the galaxies we find in the Universe obey a very simple relation between the two observable quantities of distance and redshift, where the farther away an object is from us, the greater its measured redshift will be.

Remarkably, the law that relates them is extremely straightforward: the recession speed that you would infer from a galaxy’s redshift equals the distance to that galaxy multiplied by the Hubble constant. Even more remarkably, that constant has the same value for pretty much every galaxy we measure, particularly for galaxies within a few billion light-years of us. Even though there are additional cosmic motions inherent to each galaxy induced by gravitational effects, this law remains true when you average over all the galaxies you can find.

So what do we measure the Hubble constant to be? It depends on how you measure it, since:

Why these two values don’t match — and why they give such different, mutually inconsistent answers — is one of the major conundrums of modern cosmology.

However, the very astute among you will notice something about the Hubble constant itself: it comes in units that are a speed (km/s) per unit distance (Mpc, where 1 megaparsec is about 3.26 million light-years). If you look at a galaxy that’s 100 Mpc away, you’d expect it to recede away ten times faster than one only 10 Mpc away, but only one-tenth as fast as a galaxy 1,000 Mpc away. That’s the simple power of the redshift-distance relation.

But there’s another way to manipulate the Hubble constant: to recognize that a speed (distance-per-time) per (divided by) unit distance (distance) is the same as units of inverse time. What could the physical meaning of that “inverse time” correspond to? Perhaps, you might reasonably imagine, it could correspond to the age of the Universe.

There are approximately 3.1 × 1019 kilometers in one megaparsec, which means that if you turn the Hubble constant into an inverse time, you find some fascinating things.

However, you cannot simply change the age of the Universe by changing the Hubble constant, and there’s a subtle but vital reason why this is so.

The value of the Hubble constant today isn’t simply the inverse of the value of the age of the Universe, even though the units work out to give you a measure of time. Instead, the expansion rate that you measure — the Hubble constant today — must balance the sum total of every form of energy that contributes to the Universe’s composition, including:

The equation that governs the expanding Universe (shown above) can be solved exactly in some simple cases.

This means that if we want to accurately calculate the age of the Universe, we can do it, but the Hubble constant alone isn’t enough. In addition, we also need to know what the Universe is made out of. Two imagined Universes with the same expansion rate today but made out of different forms of energy will have different expansion histories and, therefore, different ages from one another.


ESA and the Planck collaboration

Where you see dark blue or dark red spots, those are regions where the temperature fluctuations are largest: approximately 200 microkelvin colder (for blue) or hotter (for red) than the mean value. These fluctuations exhibit particular patterns in their magnitude on a variety of angular scales, with the fluctuations rising in magnitude down to some particular angular scale of about 1 degree, then decreasing and increasing in an oscillatory fashion. Those oscillations tell us some vital statistics about the Universe.

What’s most important to realize is that there are many possible combinations of values that can fit any particular graph. For example, given the fluctuations we see, we can have a Universe with:

However, in order to be consistent with what we observe, the Universe can be no younger than 13.6 billion years and no older than 14.0 billion years, to more than 95% confidence. There are many properties of the Universe that are indeed in doubt, but its age isn’t one of them. Just make sure you take the Universe’s composition into account, or you’ll wind up with a naive — and incorrect — answer.