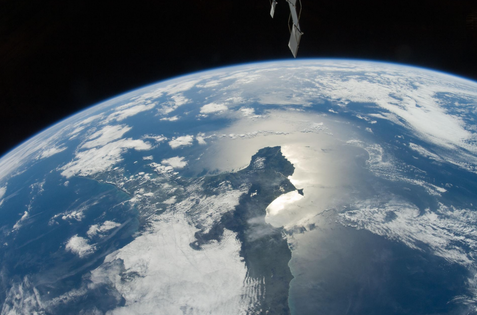 A panoramic view centered on the Azuero Peninsula of Panama. The southwestern Caribbean Sea and the cloud-covered Isthmus of Panama are to the left and the Gulf of Panama and the eastern Pacific Ocean with sun glint are on the right.Ron Garan/JSC/NASA

The Isthmus of Panama, separating the Caribbean Sea from the Pacific Ocean, has historically been of enormous value to a wide range of communities. Arguably most famous for the feat of engineering that is the Panama Canal, it was once targeted for a huge expansion which almost involved the use of nuclear weapons.

Now, a brand-new paper in Scientific Reports is set to transform how we understand the origins of this hugely significant landmass. It suggests that the current model – in which a volcanic landscape is gradually pushed up over the course of a lengthy tectonic battle – may not be the full picture. Instead, the Cardiff University-led team has quite literally dug up evidence that suggests active volcanism, the sort that causes islands to rise up from the waves all over the world, helped build this colossal bridge too.

As noted by NASA’s Earth Observatory, around 20 million years ago the Isthmus didn’t exist, and the sea flowed freely instead between North and South America. As is still happening today, the Pacific tectonic plate was slowly slipping beneath the Caribbean plate. Like that observed at other subduction zones all over the planet, this created some strange crust-mantle interactions that produced volcanism at the surface. In this case, that meant volcanoes appeared underwater.

Over time, these volcanoes grew ever higher as they continued to erupt and beef up their flanks. At the same time, the fight between these two tectonic plates physically pushed up the crust, causing the seafloor to rise. When the peaks of these volcanoes poked above the sea surface, sediment flowing through the region managed to stick and build up along newly formed shores. By 2.8 million years ago, the gap between the two continents had been entirely filled in, and the Isthmus we know and love today had been constructed.

That, at least, is the classic story.

David Buchs, a lecturer in geology at Cardiff University and lead author of the new study, wondered if this grand geological story was incomplete. His previous work on volcanic islands, like those in the Hawai’ian archipelago, demonstrated clearly that plenty of landforms can become new terrestrial landmarks all by themselves without any tectonic uplift involved whatsoever. The Isthmus is quite clearly a volcanic landscape, so it seemed logical that role active volcanism played a role at the surface.

As the new study highlights, there is already some sedimentological evidence that shows terrestrial deposits existed in the region 45 million years ago. In fact, emergent islands, those volcanic islands that pop up from the sea, appear to have existed as far back as 70 million years ago. Surely, the team thought, the Isthmus couldn’t be the result of tectonic uplift alone.

With that in mind, Buchs’ team headed to the Isthmus from 2015 to 2018 to investigate. They took sediment samples from a wide range of locations back to the lab, prised them apart and carefully dated them using radioactively decaying argon inclusions.

This revealed that there were at least three distinct phases of volcanism that took place at the surface or in shallow marine environments from around 25 million years ago. Some deposits showed that there were flows of volcanic debris making their way down rivers; others recorded the presence of ash fallout and superheated pyroclastic density currents that welded themselves together upon cooling. You also had more effusive, fluid magma types involved that reacted with shallow bodies of water and caused explosive blasts that built up steep-sided mounds named tuff cones.

This fury would have dumped plenty of volcanic debris all over the surface, which meant that to some degree surface-level volcanic eruptions helped construct the Isthmus itself. It may seem surprising that this idea hadn’t really been seriously suggested before, but Buchs suspects that this is due to a historical bias: until recently, palaeontologists and tectonic researchers had investigated the story of the Isthmus, but not many field volcanologists had yet made the trip themselves.

Volcanism isn’t all there is too it though. Buchs pointed out that as volcanism looks likely to have stopped in the region before Panama properly emerged from the sea, it’s certain that tectonic uplift played a major role in the formation of the Isthmus too.

“We are merely suggesting that volcanism could have played an important and probably overlooked role in the emergence of the Isthmus,” he explained. Far from a rebuttal of previous models, this work is best regarded as “a constructive call to highlight an important need to better characterise the volcanic growth in the area.”

Plenty more research is required to shore up these ideas a little better. As the study emphasises, future fieldwork is necessary to disentangle the volcanic and tectonic contributions, and to better constrain the date in which the Isthmus finally popped up above the sea.

Cristian Farías, a geophysical research scientist at the Temuco Catholic University in Chile not involved with the work, told me that the team’s research “gives volcanoes an important role in the creation and evolution of a large extension of land.” That’s not something he hears every day, “since we tend to understand these larger processes in terms of slow tectonic interactions.”

Volcanic or tectonic, the creation of the Isthmus isn’t just a footnote in Earth’s natural history – it initiated multiple major events whose effects rippled across the entire planet.

Its formation cut the Pacific and Atlantic Oceans off from each other, which dramatically changed their compositions. Marine lifeforms, once free to mingle between the two oceans, were now segregated into two distinct evolutionary population groups, leading to two separate evolutionary pathways.

The newly built land bridge also served as a major route for all kinds of terrestrial animals, including the ancestors of cats, bears, horses, dogs and porcupines, to name just a few. It’s even responsible for kickstarting the Gulf Stream, an oceanic current that among other things explains why the UK, which is as high up as the chiller reaches of Canada, isn’t completely covered in snow and ice.

With all this in mind, chronicling the history of the Isthmus doesn’t just scratch a scientific itch. By studying it, we come a little closer to comprehending one of the most important geological events to take place on Earth in the past 60 million years.

Trump agrees to deal in which TikTok will partner with Oracle and Walmart
Sustainable Innovation in the Textile Industry
Astranis adds former NASA Administrator Dan Goldin to advisory board
Why agtech is critical for regenerative agriculture
Big potential, but challenges to overcome: A look at offshore wind in the U.S.