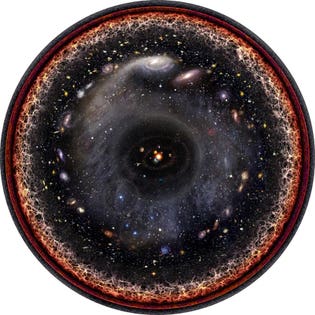 When you gaze up at the night sky, through the veil of stars and the plane of the Milky Way close by, you can’t help but feel small before the grand abyss of the Universe that lies beyond. Even though nearly all of them are invisible to our eyes, our observable Universe, extending tens of billions of light years in all directions, contains a fantastically large number of galaxies within it.

Just how many galaxies are out there used to be a mystery, with estimates rising from the thousands to the millions to the billions, all as telescope technology improved. If we made the most straightforward estimate using today’s best technology, we’d state there are 170 billion galaxies in our Universe. But we know more than that, and our modern estimate is even grander: two trillion galaxies. Here’s how we got there.

In an ideal world, we’d simply count them all. We’d point our telescopes at the sky, cover the entire thing, collect every photon emitted our way, and detect every object that was out there, no matter how faint. With arbitrarily good technology and an infinite amount of resources, we’d simply measure everything in the Universe, and that would teach us how many galaxies are out there.

But in practice, that won’t work. Our telescopes are limited in size, which in turn limits how many photons they can collect and the resolutions they can achieve. There’s a trade-off between how faint an object you can see and how much of the sky you can take in at once. Some of the Universe is obscured by intervening matter. And the more distant an object is, the fainter it appears; at some point, a source is far enough away that even observing for a century won’t reveal such a galaxy.

So what we can do, instead, is to view a clear portion of the Universe without intervening matter, stars, or galaxies as deeply as possible. The longer you stare at a single patch of sky, the more light you’ll collect and the more you’ll reveal about it. We first did this in the mid-1990s with the Hubble Space Telescope, pointing at a patch of sky that was known to have practically nothing in it, and to simply sit on that spot and let the Universe reveal what was present.

It was one of the riskiest strategies of all-time. If it failed, it would have been a waste of over a week of observing time on the newly-corrected Hubble Space Telescope, the most sought-after observatory to take data with. But if it succeeded, it promised to reveal a glimpse of the Universe in a way we had never seen before.

We collected data for hundreds of orbits, across a multitude of different wavelengths, hoping to reveal galaxies that were fainter, more distant, and harder to see than any we had detected before. We hoped to learn what the ultra-distant Universe really looked like. And when that first image finally was processed and released, we got a view unlike any other.

Everywhere we looked, in all directions, there were galaxies. Not just a few, but thousands upon thousands of them. The Universe wasn’t empty and it wasn’t dark; it was full of light-emitting sources. As far as we were capable of seeing, stars and galaxies were clumped and clustered everywhere.

But there were other limits. The most distant galaxies are caught up in the expansion of the Universe, causing distant galaxies to redshift past the point where our optical and near-infrared telescopes (like Hubble) could detect them. Finite sizes and observing times meant that only the galaxies above a certain brightness threshold could be seen. And very small, low-mass galaxies, like Segue 3 in our own backyard, would be far too faint and small to resolve.

So we could push past our technological limits from that mid-1990s image, but even so, we could never get all the galaxies. The best attempt we ever made was the Hubble eXtreme Deep Field (XDF), which represented a composite image of ultraviolet, optical, and infrared data. By observing just a tiny patch of sky so small it would take 32 million of them to cover all the possible directions we could look, we accumulated a total of 23 days worth of data.

Stacking everything together into a single image revealed something never-before seen: a total of approximately 5,500 galaxies. This represented the highest density of galaxies ever observed through a narrow, pencil-like beam in space.

You might think, therefore, that we could estimate the number of galaxies in the Universe by taking the number we observed in this image and multiplying it by the number of such images it would take to cover the entire sky.

In fact, you can get a spectacular number by doing so: 5500 multiplied by 32 million comes out to an incredible 176 billion galaxies.

But that’s not an estimate; that’s a lower limit. Nowhere in that estimate do the too-faint, too-small, or too-close-to-another galaxies show up. Nowhere do the galaxies obscured by the neutral gas and dust appear, nor do the galaxies located beyond the redshift capabilities of Hubble. Yet, just as those galaxies exist nearby, they ought to exist in the young, distant Universe as well.

The big ingredient that we need to come up with a true estimate, then, is how structure accurately forms in the Universe. If we can run a simulation that starts with:

we can simulate how such a Universe evolves. We can simulate when stars form, when gravity pulls matter into large enough collections to create galaxies, and to compare what our simulations predict with the Universe, both near-and-far, that we actually observe.

Perhaps surprisingly, there are more galaxies the early Universe than there are today. But unsurprisingly, they’re smaller, less massive, and are destined to merge together into the old spirals and ellipticals that dominate the Universe we inhabit at present. The simulations that match best with reality contain dark matter, dark energy, and small, seed fluctuations that will grow, over time, into stars, galaxies, and clusters of galaxies.

Most remarkably, when we look at the simulations that match the observed data the best, we can extract, based on our most advanced understanding, which clumps of structure should equate to a galaxy within our Universe.

When we do exactly that, we get a number that’s not a lower-limit, but rather an estimate for the true number of galaxies contained within our observable Universe. The remarkable answer?

As of today, two trillion galaxies should exist within our observable Universe.

Yet, that number is so remarkably different from the lower-limit estimate we came up with from the Hubble eXtreme Deep Field image. Two trillion versus 176 billion means that more than 90% of the galaxies within our Universe are beyond the detection capabilities of even humanity’s greatest observatory, even if we look for nearly a month at a time.

Over time, galaxies merged together and grew, but small, faint galaxies still remain today. Even in our own Local Group, we’re still discovering galaxies that contain mere thousands of stars, and the number of galaxies we know of have increased to more than 70. The faintest, smallest, most distant galaxies of all are continuing to go undiscovered, but we know they must be there. For the first time, we can scientifically estimate how many galaxies are out there in the Universe.

The next step in the great cosmic puzzle is to find and characterize as many of them as possible, and understand how the Universe grew up. Led by the James Webb Space Telescope and the next generation of ground-based observatories, including LSST, GMT, and the ELT, we’re poised to reveal the hitherto unseen Universe as never before.