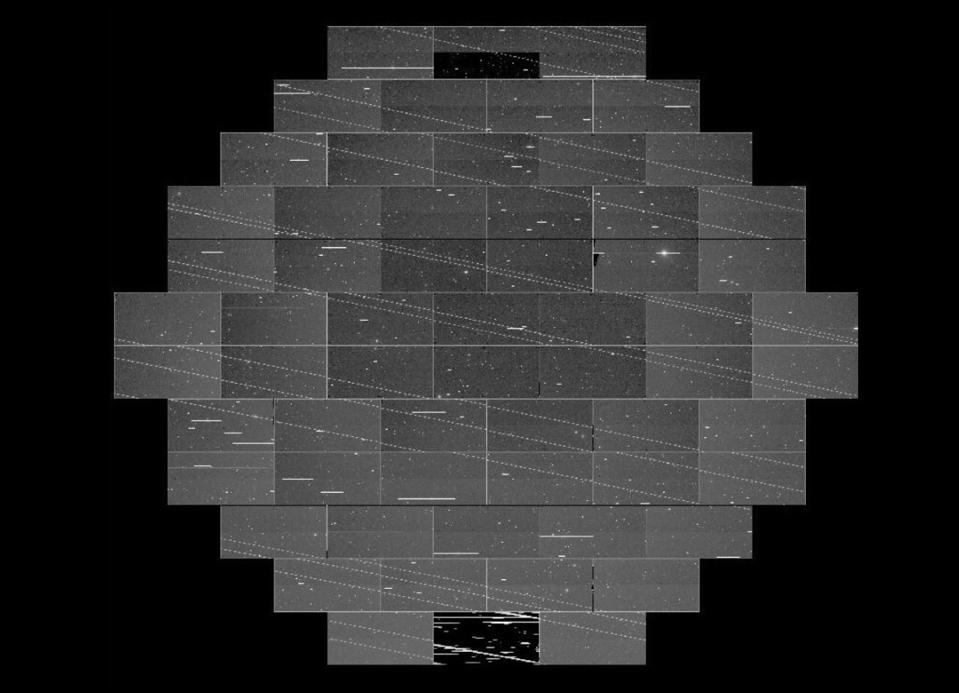 In the early hours of the morning today, November 18, two astronomers checked in on their remotely operated telescope in Chile, expecting to see images of distant stars and galaxies. Instead, they saw a train of SpaceX satellites crossing the night sky, a worrying sign of what might be to come for astronomy.

“Here we were, we had a second half of the night observing, and then we kind of just see all of these streaks,” says Cliff Johnson from Northwestern University in Chicago, one of the two astronomers. “We put two and two together and it was like oh yeah, it’s the train of all the Starlink satellites.”

Starlink is SpaceX’s impending mega constellation of up to 42,000 satellites that will beam high-speed internet around the world. SpaceX, along with its competitors such as OneWeb and Amazon, has touted the benefits of bringing the internet to all, including the estimated three billion without internet access.

However, with just 3,000 active satellites orbiting earth today, many astronomers have expressed concerns that this dramatic increase will create many more artificial points of light in the night sky. For a science that relies on dark skies, having multiple satellites constantly visible could pose significant problems.

Last week, SpaceX launched its second batch of 60 Starlink satellites, after an inaugural launch in May this year. The satelites were deployed in a long train at an altitude of 280 kilometers, visible even to the naked eye, but are in the process of being raised to their operational altitude of 550 kilometers, where they will still be visible to binoculars and telescopes.

“These things are big enough that when they’re sunlit, they’re bright enough to pick up with anything from binoculars and bigger,” says Cees Bassa from the Netherlands Institute for Radio Astronomy. Bassa has calculated that up to 140 mega constellation satellites could be visible at any one time if all the planned satellites launch.

Johnson is part of a team of astronomers studying galaxies that are dominated by dark matter. Using the Dark Energy Camera (DECam) on the four-meter Blanco telescope at the Cerro Tololo Inter-American Observatory (CTIO) in Chile, the team are running a three-year survey called DECam Local Volume Exploration (DELVE) to observe nearby galaxies.

Last night, they were taking about 40 exposures of the night sky, looking towards the small and large magellanic clouds, two dwarf galaxies that neighbor the Milky Way. But during one set of those observations, 90 minutes before sunrise, the train of SpaceX’s Starlink satellites moved into view, glinting in the early morning sunlight and taking five minutes to pass across the telescope’s line of sight.

In the dead of night, the Starlink satellites are not visible as they are shrouded in Earth’s shadow. But at this time in the morning, still a prime time for astronomy, the satellites were clearly visible in orbit, caught not just in the telescope’s field-of-view but a webcam at the observatory too.

“This happened just before astronomical twilight,” says Johnson. “By almost any observing standard this was still the heart of the night, exactly when you want to be taking data. And especially when you want to use every minute of observing time you get on these telescopes and these facilities.”

Satellites crossing the plane of view of telescopes is not unheard of, and image processing tools can be used to remove the trails – although if any crossed the pixels of a star or galaxy, it can be more difficult. However, it is the sheer volume of satellites here that is concerning. “That was pretty shocking to me, to see 19 different satellite trails,” says Johnson. “I’d never seen that before. I think that record’s gonna hold for a while.”

So far, SpaceX has launched just 0.14 percent of its total planned Starlink constellation, with plans for launches every fortnight to increase the number of Starlink satellites orbiting Earth to about 1,500 by the end of 2020. With thousands more on the way, the risks of more events like this last night in Chile become ever-present.

SpaceX, for its part, says it is taking measures to address the concerns of the astronomy community. It says it is painting future Starlink satellites black to reduce their reflectivity, although it’s not believed this was done for this latest batch – while the glinting of the large solar panels on each satellite still poses a problem.

The company has also said it could maneuvre its constellation to create gaps and accommodate “sensitive” astronomical observations. “Those [ideas] are great on paper, but until you really get the satellites up there, I don’t think people will fully appreciate how bad it can be,” says Johnson.

Last night’s observations for the DELVE survey are not ruined beyond repair, and the affected exposure can hopefully be fixed. But the implications of where we could be headed are broad; with no laws or regulations to protect astronomy, many are worried about what the future holds.

“Losing five minutes isn’t that bad,” says Johnson. “But if we’re going to go into a future where you end up losing 30 to 60 minutes, that would be a significant chunk of our observing time through the night.

“Every minute is valuable.”