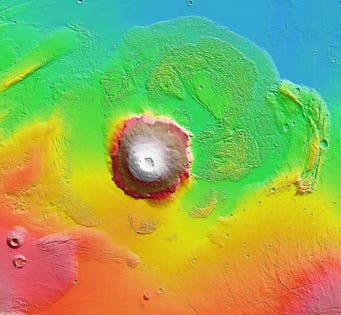 Mount Olympus, the highest peak in Greece, is 2,918 meters (9,573 feet) high – and was once thought to be home to some rather petulant gods. Compared to the Martian mountain that shares its name, though, Zeus’ terrestrial palace is a pipsqueak.

In fact, nothing on Earth can match up to the utter enormity of Olympus Mons: according to the most current mapping data, is a staggering 25 kilometres (16 miles) high. That’s around three times higher than Mount Everest, which is part of a range of peaks forged during the cataclysmic collision of two massive continental plates around 50 million years ago. It’s also 2.5 times the cruising altitude of commercial passenger jets.

It’s also an incredibly voluminous mountain that’s far wider than it is tall. With a diameter of around 624 kilometres (374 miles), which means it would just about fit, edge-to-edge, between San Francisco and Los Angeles. It’s about the same size as all of Arizona.

At its peak, there’s a huge cauldron (technically known as a caldera), that’s 80 kilometres (50 miles) across. You could fit almost 22 Manhattan Islands, back to back, inside it.

Make no mistake: this is the tallest, largest mountain in the Solar System. Only Rheasilva, the central peak of a massive impact crater on the asteroid Vesta, comes close.

As you may have suspected, it’s actually a ginormous volcano. It’s eruptive activity, like every other volcano on the Red Planet, died out some time ago, which makes Olympus Mons Mars’ silent sentinel, watching over a perhaps tectonically defunct landscape.

Despite it’s death, however, no volcano or mountain range on any planet, asteroid or satellite will ever match the topographical might of this titan, even on worlds or moons, like Earth or Io, where volcanism is alive and well. In order to understand why, let’s head back to our pale blue dot and see what our measly planet has been able to conjure up, volcanologically speaking.

One day, perhaps before the Sun consumes us – or at least boils off our oceans and annihilates our atmosphere – plate tectonics on Earth will grind to a halt. Although we can’t quite be sure when, or even quite how, the day will arrive, which will turn us into a world more like Venus or Mars for some time. If we’re still around in some form or another in a couple of billion years or so, we’ll have a far more boring Earth to live on.

Although subduction zones will terminate, meaning plenty of generally explosive arc volcanism – exemplified by Cascades – will die off, you’ll still get eruptions from time to time. One way in which this will occur is through upwelling mantle plumes: solid, superheated fountains of partially molten rock that, upon decompressing, trigger vast amounts of melting in the lower crust. Indeed, that’s how volcanic island chains like Hawaii form: a moving tectonic plate but a stationary mantle plume results in volcanoes being born, running out of fuel, and finding themselves neighbours with a new upstart.

Such activity is responsible for creating some genuinely huge volcanoes, though. Named shield volcanoes – like Olympus Mons – these build up when generally fluid, not particularly sticky lava fires up through a series of vents or fissures, before spreading out across its surface. The constant plume activity means that such volcanoes can erupt for incredibly long time periods: Kilauea, for example, has been continuously erupting in some form or another since 1983.

Ultimately, this results in volcanoes that are tall, sure, but that are also unbelievably long. Hawaii’s Mauna Loa is generally agreed to be the largest volcano on Earth thanks to these mechanisms: it’s about 10 kilometres (6.3 miles) high, and 120 kilometres (75 miles across), which is definitely nothing to sneeze at.

Another volcano, this time extinct, named Tamu Massif may have pipped it to the post. Found in the northwestern Pacific Ocean, it’s 650 kilometres along its most considerably length, and is the size of New Mexico. Long thought to be an underwater collection of individual volcanoes that have come together throughout their closely-spaced eruption history, like those bunched up on Hawaii’s Big Island, it was first suggested in 2013 that it’s all just one single volcano with one single eruptive vent.

It’s so large, and its slope extends to such a distance from the now-inactive vent, that, away from the vent, if you were standing on it, you wouldn’t even be able to tell which way it’s sloping thanks to the extremely low slope angle. As noted by National Geographic back then, this puts the Tamu Massif in the same league as Olympus Mons – and a follow-up report a few years later revealed that it’s actually even bigger than the original estimates showed.

Although it comes close, it’s still not quite as massive as Mars’ magnum opus, though, and it’s still to be confirmed as a single volcano rather than a gathering of multiple co-conspirators. So what gives? Why can’t Earth beat a planet whose volcanic activity died along with the cooling of its mantle?

As aforementioned, plate tectonics will one day stop on Earth, but it’s likely these mantle plumes will persist. That means the crustal basal melting will occur, but without moving plates, the volcanism will be concentrated in single stationary spots. Wherever these will be, this will result in the production of enormous volcanoes, larger than Tamu Massif, before the mantle cools to the point where such melting is no longer possible.

This is essentially how Olympus Mons is thought to have come into being. While it’s debated whether or not there is any tectonic activity still taking place on Mars, there’s no doubt that it’s a world in which plate tectonics failed. There may be one single massive lid of lithosphere – crust and brittle upper mantle – or a handful of tectonic plates wedged eternally together, but either way, there is no more volcanism on Mars. It’s a dying or dead world in that sense.

Before it was silenced, though, a long-lasting mantle plume fed the beast that became Olympus Mons. The reason Earth’s future attempts will pale in insignificance, however, is because of the planet’s far stronger gravitational field strength – one that’s 2.6 times that of Mars’.

This means two things: firstly, lava spreads out far more thinly on Earth, which means that our end-of-plate tectonics volcanoes will be perhaps some of the widest in the Solar System. They won’t ever be as tall, though – partly because of this more efficient lava proliferation across the surface, but also because the more intense gravitational field means, beyond a certain height (and therefore mass), it will simply sink into the crust. Punching up against less gravity, so to speak, on Mars, Olympus Mons was able to grow to such a considerable volume and height.

There’s nowhere else in the Solar System that appears to have the geological and geophysical conditions required to get anywhere close – nowhere with the right combination of crustal strength and buoyance above a less dense mantle, a weak enough gravitational field, an insignificant or non-existent persistent mantle plume system, nor the right type of lava (not too fluid, not too sticky).

What about Jupiter’s moon Io, the most volcanic object known to science? This pizza-coloured marvel is constantly erupting incredibly hot and fluid lava under low gravity, and thanks to its style of magma generation – tidal heating, driven by the gravitational pull exerted on its innards by Jupiter and the other Galilean moons – it’ll be volcanic long into its future. The problem here is that its crust quickly thickens, collapses and sinks into its mushy lower layers not long after it takes shape. With such weak foundations, Olympus Mons-like monsters don’t stand a chance at forming.

So, in this respect, Mars will forever take the top spot on the volcanological podium, one that it’ll occupy until the Sun dies and the inner rocky worlds are obliterated. Does that make it the most impressive volcanic monument known to science, though? Janine Krippner, a volcanologist at Concord University, isn’t so sure.

“Olympus Mons is the largest volcano in our Solar System, sure. I’ll give it that,” she explains. “But does biggest always mean the best? Not in my books.”

She emphasizes that Earth’s chains of active volcanoes aren’t just more visually impressive, but their tropical climates aren’t exactly unwelcome either. We also can’t forget the cryovolcanoes of our galactic backyard, nor the spectacular volcanism of Io, whose eruptive columns create frigid volcanic frost when they aren’t blasting out through the thin atmospheric shell into the space between worlds.

Even if Olympus Mons were still active, and one day, people lived around or on it – much like they do on Hawaii’s Big Island today – it wouldn’t be scarier or any more different from what’s been happening with Kilauea. It’s still a shield volcano, so there would be limited explosivity, and plenty of lava flows.

“Martian volcanologists would monitor the signs of magma movement from below. Hazard maps would be drawn for the Martian communities, and evacuations would be made if need be.” As happened over in Hawaii, “the Martians would need to get out of the way while the massive volcano does its thing.”

Being the tallest, then, certainly doesn’t make it the best – not by a long shot. Olympus Mons isn’t just an impressive epitaph to days of volcanoes past, though. There’s plenty scientists still don’t quite understand about it, and many would love to carefully peer beneath the crust to see if any remnants of that hypothesized plume could still be seen – the embers of a once-great pyre.

The better we come to understand it, the better we’ll comprehend our own planet’s shield volcanoes, and perhaps even the more bizarre forms of fiery fountains spotted elsewhere in the Solar System, both active and extinct.

The superconducting quasicharge qubit
A pandemic is no time to cut the European Research Council’s funding
How ‘green chemistry’ could have a big part to play in the future
Big potential, but challenges to overcome: A look at offshore wind in the U.S.
Breathtaking images suggest there’s fresh ice on one of Saturn’s moon