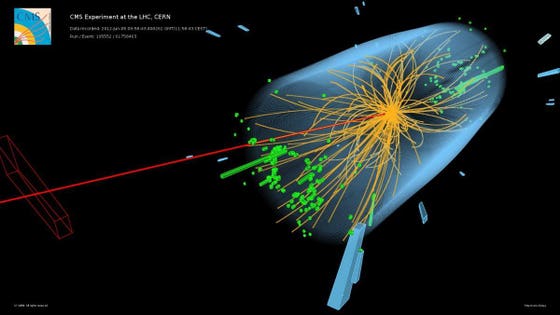 A Higgs boson event as seen in the Compact Muon Solenoid detector at the Large Hadron Collider. This spectacular collision is 15 orders of magnitude below the Planck energy, but it’s the precision measurements of the detector that allow us to reconstruct what happened back at (and near) the collision point. Although every Higgs boson may have many fundamental properties in common with all the other Higgs bosons, mass is not one of the universal properties of these particles.

One of the most puzzling aspects of quantum physics is how thoroughly it defies our intuition. If you take any stable quantum particle, like an electron, you’ll find that it shares a certain set of properties in common with all the particles that are like it. Every electron, for example, has:

along with other intrinsic properties like electron magnetic moment, its adherence to the Pauli exclusion principle, and is the matter counterpart of the antiparticle known as a positron. These properties are completely certain, even in a quantum Universe, unlike quantities like position and momentum, or spin in multiple different directions, where measuring one to a certain accuracy means you know the other one less accurately.

But not all particles are like the electron. For some of them, even their mass is inescapably uncertain.

From a theorist’s perspective, quantum uncertainty plays an important role whenever two measurable, observable properties are related in a very specific way: if they’re non-commutative. The idea that something would or wouldn’t be commutative is weird to think about, and may take you back to memories of bizarre mathematical properties or identities. But this simple example might help you think about it intuitively.

Imagine you’re a quantum particle, and that a scientist comes along to try and measure some intrinsic properties about you. If the scientist first measures your position (i.e., where you are) and then measures your momentum (i.e., how fast you’re moving in a particular direction), they’ll get two answers: first position and then momentum. Now, imagine the scientist went in the other order: first measuring your momentum and then your position. If these two variables commuted, you’d get the same answer, regardless of order.

This diagram illustrates the inherent uncertainty relation between position and momentum. When one is known more accurately, the other is inherently less able to be known accurately.

But in the quantum world, the act of making a measurement can shift your quantum state from an indeterminate one to a well-determined one. When variables don’t commute, there’s an inherent uncertainty that’s shared between a pair of measurable quantities. If you measure one to a specific precision, the other one, by the nature of how physics behaves, becomes inherently more uncertain. While we normally associate this with position and momentum, other pairs of variables display this behavior, too.

Passing particles with two possible spin configurations through a specific type of magnet will cause the particles to split into + and – spin states.

But here’s the thing: the electron’s spin, of ±ℏ/2, isn’t confined to being in the x-direction. Our space has three dimensions: x, y, and z. If you determine the electron’s spin in one of those dimensions, you automatically destroy that information in the other two dimensions. If you take your +ℏ/2 electrons from the x-direction and then pass them through a magnetic field in the y-direction, you’ll not only see the split in that direction, but the act of making that measurement will destroy the information in the x-direction. Measuring an electron’s spin in the x and then the y directions will give you a very different electron than measuring it in first the y and then the x direction!

Multiple successive Stern-Gerlach experiments, which split quantum particles along one axis according to their spins, will cause further magnetic splitting in directions perpendicular to the most recent one measured, but no additional splitting in the same direction.

It might not make a lot of sense that “four times two” would give you a different answer than “two times four,” but certain quantum operators have exactly that property: they don’t commute. This fundamental and unavoidable property is known as Heisenberg uncertainty, and it takes place between any two non-commuting variables/operators. For quantities like angular momentum in the x, y, and z directions, or like position (Δx) and momentum (Δp), this inherent uncertainty cannot be ignored.

There are plenty of other physical quantities that have the same uncertainty relations between them. The ones that do, we call conjugate variables. They include angular momentum (ΔL) and angular position (Δθ), free electric charge (Δq) and voltage (Δφ), and — of particular relevance here — the pair of energy (ΔE) and time (Δt).

A visualization of QCD illustrates how particle/antiparticle pairs pop out of the quantum vacuum for very small amounts of time as a consequence of Heisenberg uncertainty. The quantum vacuum is interesting because it demands that empty space itself isn’t so empty, but is filled with all the particles, antiparticles and fields in various states that are demanded by the quantum field theory that describes our Universe. Put this all together, and you find that empty space has a zero-point energy that’s actually greater than zero.

If you were to take a look at empty space itself, you might conclude that there’s nothing in it at all. But at a quantum level, there are quantum fields permeating all of that space, and those fields don’t just exist at zero energy; they exist with energy fluctuations (ΔE) that get larger as the timescales you look at (Δt) get shorter. What Heisenberg’s uncertainty relation tells you is that the product of these two uncertainties must always be greater than or equal to a finite quantity: ℏ/2.

When we talk about a real particle that exists, you don’t have to worry about this type of energy uncertainty if the particle is stable. The reason is simple: stability means its lifetime is infinite. If you add a finite uncertainty to an infinite lifetime, you don’t change anything about it; adding a constant to infinity is inconsequential. But if your particle is unstable, meaning that its lifetime itself is uncertain (there’s a real Δt), then its energy (ΔE) must be uncertain, too.

The first robust, 5-sigma detection of the Higgs boson was announced a few years ago by both the CMS and ATLAS collaborations. But the Higgs boson doesn’t make a single ‘spike’ in the data, but rather a spread-out bump, due to its inherent uncertainty in mass. Its mean mass value of 125 GeV/c^2 is a puzzle for theoretical physics, but experimentalists need not worry: it exists, we can create it, and now we can measure and study its properties as well.

The CMS Collaboration, “Observation of the diphoton decay of the Higgs boson and measurement of its properties”, (2014)

Now, think about this equation that determines the uncertainty: ΔE · Δt ≥ ℏ/2. When you have a particle that lives for a shorter time, it’s Δt will be smaller. If Δt is smaller, but ΔE · Δt has to be greater than (or equal to) a certain constant, then that necessarily means that ΔE must be larger. And therefore, because of Einstein’s most famous equation, E = mc2, the mass of this particle must have an inherent uncertainty, too.

The Higgs boson only lives for around 10-23 seconds, and has a large ΔE as a result: its mass is uncertain by about ~1% over the median value. If you create a single Higgs boson, it could just as easily have a mass of 123.4 GeV/c2 as it could have a mass of 125.9 GeV/c2. Other short-lived, very massive particles, like the W or Z boson, have similar intrinsic properties: their masses are uncertain by ~2-3% as well.

The inherent width, or half the width of the peak in the above image when you’re halfway to the top, is measured to be 2.5 GeV: an inherent uncertainty of about ±3% of the total mass.

But the worst offender of all is the top quark. The top quark is the shortest-lived particle in the entire Standard Model, living for just 0.5 yoctoseconds on average, or 5 × 10-25 s. When you create a top quark, it might live for half or a quarter of that average time, or for twice or thrice that time, or anywhere in between. There will similarly be an average mass to the top quark, but each value will follow a bell-curve-shaped distribution.

While the average top quark mass might be somewhere around 173 to 174 GeV/c2, some top quarks will be as low as 165 GeV/c2 while others will be up above 180 GeV/c2. This is not some artifact of how we measure it or a limitation of our detectors; these variations in the top quark’s mass actually change from particle to particle. In other words, each individual top quark doesn’t necessarily have the same mass as the top quark next to it!

The best measurements, from Fermilab’s two main collaborations (D0 and CDF), of the various average masses of the top quark as obtained by measuring a variety of decay channels. Note the large uncertainties, and also the fact that many top quarks appear to be either much more or much less massive than average. This is not an error!

Whenever you create a new fundamental particle, if it has a finite lifetime and isn’t truly stable, there will by necessity be an inherent uncertainty to the amount of intrinsic energy the particle possesses. As a result, literally, it has a fundamentally different mass from even the other particles of exactly that same type.

All the electrons in the Universe may be identical to one another, but with a finite and short lifetime, we can be certain that every Higgs boson, W-boson, Z-boson, or top quark has its own unique properties that depend on the quantum uncertainty that governs its existence. Each such particle will have its own unique set of particles it decays to, the fractional energies imparted to each of those daughter particles, and will have uncertainties to its positions, momenta, angular momenta, and yes, even its energy and its mass.

The reconstructed mass distributions of the top quarks in the CDF detector at Fermilab, prior to the turn-on of the LHC, showed a large uncertainty in the top quark’s mass. While most of this was due to detector uncertainties, there is an inherent uncertainty to the mass itself that shows up as part of this broad peak.

In this quantum Universe, every particle will have properties that are inherently uncertain, as many of the measurable properties are changed by the act of measurement itself, even if you measure a property other than the one you wish to know. While we might talk about photon or electron uncertainties most commonly, some particles are also unstable, which means their lifetime is not pre-determined from the moment of their creation. For those classes of particles, their inherent energy, and therefore their mass, is inherently variable, too.

While we might be able to state the mass of the average unstable particle of a particular variety, like the Higgs boson or the top quark, each individual particle of that type will have its own, unique value. Quantum uncertainty can now be convincingly extended all the way to the rest energy of an unstable, fundamental particle. In a quantum Universe, even a property as basic as mass itself can never be set in stone.

Indian Billionaire Claims His New Herbal Concoction Is A ‘100% Cure’ For Covid-19
In a moving gesture, NASA names agency headquarters after ‘hidden figure’ Mary Jackson
Hundreds of Israel’s archaeological sites are vanishing under concrete
Treasury sanctions Iranian ship captains after gasoline delivery to Venezuela
What Happens When You Procrastinate Too Much