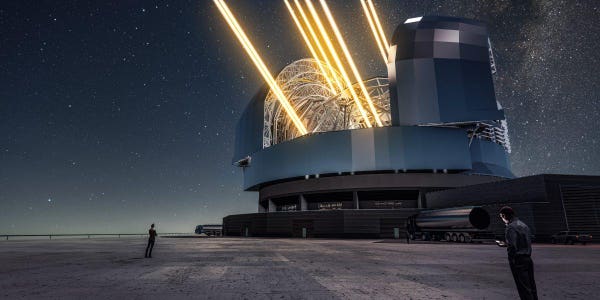 There is an existential threat to astronomy as we know it, and it comes from humanity itself. On two simultaneous fronts, Earth’s night sky, as seen from the surface, are being polluted as never before. Over the past few decades, the growth of human populations, sprawling urban areas, and technological advances like LED lighting have led to an explosion of light pollution, where truly dark skies have become an increasing rarity.

At the same time, the coming advent of mega-constellations of satellites, where networks of thousands to tens-of-thousands of large, reflective satellites are poised to become commonplace in the night sky, will translate into hundreds of bright, moving objects visible from any location where telescopes are common. If we ruin Earth for ground-based astronomy, we won’t be able to simply replace them with space-based observatories for a number of important reasons. Here’s why.

To start, it’s absolutely vital to understand what advantages astronomy has from space versus on the ground, because the benefits are enormous. For one, there’s never daytime or any light pollution to contend with; it’s always night from space when you point away from the Sun. You don’t have to worry about clouds, weather, or atmospheric turbulence from space, whereas on Earth, you’re basically looking out at the Universe from the bottom of a giant, atmosphere-filled swimming pool.

All the confounding factors that have to be dealt with on Earth, from molecular absorption and emission signatures like ozone, sodium, water vapor, etc., are eliminated by going to space. You can observe anywhere you want, all across the electromagnetic spectrum, and there’s no atmosphere blocking your view. And can get incomparably large, wide, precise fields-of-view without any directional biases.

In short, your views of the Universe are wholly unobstructed if you leave the bonds of Earth. If you’re willing to go a little farther away — out of low-Earth orbit and farther away, such as to the L2 Lagrange point — you can cool yourself down tremendously, avoid the noisy signals originating from Earth, and still respond to any Earth-issued command in just 5 seconds: the light-travel time from Earth’s surface to L2.

No matter what pollutants we wreak upon the Earth, even if we lose all our dark skies and our ability to track and image objects from the ground due to a catastrophic set of satellites, we’ll still have space to help us achieve our astronomical dreams. Which is good, because even if all we had were the first 12,000 Starlink satellites added to the mix, this is what the night sky (below) would look like to professional astronomers.

But the loss of ground-based astronomy, if we aren’t careful to preserve both darkness and our window to the Universe, will be extraordinarily harmful to our most carefully planned scientific endeavors. At a moment in history where we are on the cusp of reaching into the distant, faint past farther and to greater precision than ever before, a combination of thoughtless and careless forces — under the questionable guise of human progress — threatens to derail our dreams of discovering the Universe.

Astronomy’s near-term plans include large (10-meter class) telescopes are being commissioned to perform differential imaging on the entire sky, searching for variable stars, transient events, Earth-hazardous objects, and more. They include the world’s first 30-meter class telescopes, including the GMT and the ELT. And, unless we’re careful, these upcoming, cutting-edge observatories may never be able to fulfill their science goals.

While it’s easy to point to the ways that space-based astronomy is superior to ground-based astronomy, there are still substantial advantages that being on the ground offers, and that astronomers continue to take advantage of even in a post-Hubble era. We can create images, collect data, and perform scientific investigations that simply cannot occur with space-based observatories alone.

There are five major metrics where ground-based observatories should always remain leaps and bounds ahead of space-based ones, and they generally include:

If we can keep our skies dark, clear, and unobstructed, ground-based astronomy is sure to enter a golden age as the 21st century unfolds. Here’s what’s great about the ground.

1.) Size. Simply put, you can build a larger ground-based observatory, with a larger primary mirror, than you can build or assemble in space. There’s a common (but incorrect) line of thinking that if we just spent enough money on the task, we could build a telescope as large as we wanted on the ground and then launch it into space. That’s only true up to a point: the point that you have to fit your observatory into the rocket that’s launching it.

The largest primary mirror ever to be launched into space belongs to ESA’s Herschel, with a 3.5 mirror. James Webb will be bigger, but that’s due to its unique (and risky) segmented design, and even that (at 6.5 meters) cannot compete with the large, ground-based telescopes we’re building. The largest space-based telescope ever proposed, LUVOIR (with a segmented design and a 15.1 meter aperture), still pales in comparison to the 25-meter GMT or the 39-meter ELT. In astronomy, size determines your resolution and your light-gathering power. With the addition of adaptive optics, there are some metrics by which space is simply non-competitive with being on the ground.

2.) Reliability. When we build a new telescope on the ground, there’s no risk of a launch failure. If there’s a piece of equipment that malfunctions, we can easily replace it. But going to space is an all-or-nothing proposition. If your rocket explodes on launch, your observatory  no matter how expensive or sophisticated  is lost. You’ll never hear what the results are from NASA’s Orbiting Carbon Observatory, which was designed to measure how CO2 move through the atmosphere from space, because it failed to separate from the rocket and crashed into the ocean 17 minutes after takeoff.

The bigger the mission, the bigger the cost of failure. In January of 2018, the rocket that will launch the James Webb Space Telescope, the Ariane 5, suffered a partial failure (that would be catastrophic for Webb) after 82 consecutive successes. Hubble’s infamous defective mirror was only fixable because it was within our reach. In space, you get one shot at success per mission, and 100% reliability will never be achieved.

3.) Versatility. Once you’re in space, gravity and the laws of motion pretty much fix where your observatory is going to be at any given time. While there are plenty of astronomical curiosities that can be seen from anywhere, there are a few events, many of them spectacular, that require you to control (to extreme precision) where you’ll be located at a particular moment in time.

Solar eclipses are one such phenomenon, but astronomical occultations offer an incredible opportunity that require just the right positioning. When Neptune’s moon Triton or 486958 Arrokoth occult a background star, we can leverage ground-based (and in some cases, mobile) observatories to control our position exquisitely; when Jupiter occults a quasar, we can use it to measure the speed of gravity.

If we were to put all our eggs in the space telescope basket, these ultra-rare events would cease to be scientifically meaningful, as we cannot control our position and its change over time from space the way we do on Earth.

4.) Maintenance. This is at the root of an infrastructure problem: you have more of it on the ground than you’ll ever have in space. If some component fails or wears out, you make do with what you’ve got in space, or you spend an enormous amount of resources to attempt to service it. Run out of coolant? You need a mission. Gyroscopes or other pointing mechanisms wear out? You need a mission. Have an optical component that degrades? You need a mission. Sunshield failure? Struck by a micrometeor? Instrument failure? Electrical short? Run out of fuel? You have to send a servicing mission.

But from the ground, you can have even extravagant facilities on-site. A faulty mirror can be swapped out. More coolant can be obtained for your infrared telescope. Repairs can be made by human or robotic hands in real-time. New parts and even new personnel can be brought in at a moment’s notice. Hubble has lasted for nearly 30 years, but ground-based telescopes can last over half a century with maintained infrastructure. It’s no contest.

5.) Upgradability. By the time that a space telescope is launched, the instruments aboard it are already obsolete. To get a space telescope designed and built, you have to decide what its science goals will be, and that informs what instruments will be designed, built, and integrated on-board the observatory. Then you have to design them, manufacture the components, build and assemble them, install, integrate and test them, and finally launch them.

This necessarily means that the instruments that are proposed (and then built) are years out of date even when the space telescope takes data for the very first time. On the other hand, if your observatory is on the ground, you can simply pop out the old instrument and replace it with a new one, and your old telescope is state-of-the-art once again, a process that can continue as long as the observatory remains in operation.

There’s no doubt that going to space provides humanity with a window on the Universe that we’d never get to exploit if we remained on Earth. The sharp, narrow-field images we can construct are incomparable, and as we move into the next generation of space-based observatories like Athena, James Webb, WFIRST and (maybe) even LUVOIR, we’ll answer many of today’s mysteries concerning the nature of the Universe.

Yet there are some scientific tasks that are far better suited to ground-based astronomy than space-based astronomy. In particular, deep spectroscopic imaging of distant targets, direct exoplanet studies, identification of potentially hazardous objects, hunting for objects in the outer Solar System (like Planet Nine), all-sky surveys for variable objects, interferometry studies and much more are all superior from the ground. Losing the benefits of ground-based astronomy would be both catastrophic and unnecessary, as even a small effort can prevent it. But if we continue to be reckless and careless with our skies — two all-too-human traits — they’ll disappear, along with ground-based astronomy, before we know it.