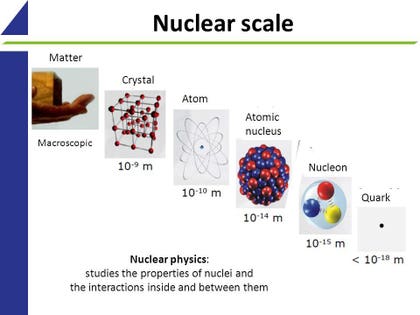 Take a look around you at everything on Earth. If you were to investigate what any object is made out of, you could subdivide it into progressively smaller and smaller chunks. All living creatures are made up of cells, which in turn are composed of a complex array of molecules, which themselves are stitched together out of atoms. Atoms themselves can be broken down further: into atomic nuclei and electrons. These are the constituent components of all matter on Earth and, for that matter, all the normal matter we know of in the Universe.

It might make you wonder how this occurs. How do atoms, made of atomic nuclei and electrons, which come in less than 100 varieties, give rise to the enormous diversity of molecules, objects, creatures and everything else we find? We owe the answer to one underappreciated quantum rule: the Pauli Exclusion Principle.

The atomic orbitals in their ground state (top left), along with the next-lowest energy states as you progress rightwards and then down. These fundamental configurations govern how atoms behave and exert inter-atomic forces.

When most of us think of quantum mechanics, we think of the bizarre and counterintuitive features of our Universe on the smallest scales. We think about Heisenberg uncertainty, and the fact that it’s impossible to simultaneously know pairs of physical properties (like position and momentum, energy and time, or angular momentum in two perpendicular directions) beyond a limited mutual precision.

We think about the wave-particle nature of matter, and how even single particles (like electrons or photons) can behave as though they interfere with themselves. And we often think about Schrödinger’s cat, and how quantum systems can exist in a combination of multiple possible outcomes simultaneously, only to reduce to one specific outcome when we make a critical, decisive measurement.

Schrodinger’s cat is a thought experiment designed to illustrate the bizarre and counterintuitive nature of quantum mechanics. A quantum system can be in a superposition of multiple states until a critical measurement/observation is made, at which point there is only one measurable outcome.

Most of us barely give a second thought to the Pauli Exclusion Principle, which simply states that no two identical fermions can occupy the same exact quantum state in the same system.

Actually, it’s not only a big deal; it’s the biggest deal of all. When Niels Bohr first put out his model of the atom, it was simple but extremely effective. By viewing the electrons as planet-like entities that orbited the nucleus, but only at explicit energy levels that were governed by straightforward mathematical rules, his model reproduced the coarse structure of matter. As electrons transitioned between the energy levels, they emitted or absorbed photons, which in turn described the spectrum of each individual element.

When free electrons recombine with hydrogen nuclei, the electrons cascade down the energy levels, emitting photons as they go. In order for stable, neutral atoms to form in the early Universe, they have to reach the ground state without producing a potentially ionizing, ultraviolet photon. The Bohr model of the atom provides the course (or rough, or gross) structure of the energy levels, but this already was insufficient to describe what had been seen decades prior.

If it weren’t for the Pauli Exclusion Principle, the matter we have in our Universe would behave in an extraordinarily different fashion. The electrons, you see, are examples of fermions. Every electron is fundamentally identical to every other electron in the Universe, with the same charge, mass, lepton number, lepton family number, and intrinsic angular momentum (or spin).

If there were no Pauli Exclusion Principle, there would be no limit to the number of electrons that could fill the ground (lowest-energy) state of an atom. Over time, and at cool enough temperatures, that’s the state that every single electron in the Universe would eventually sink to. The lowest energy orbital — the 1s orbital in each atom — would be the only orbital to contain electrons, and it would contain the electrons inherent to every atom.

This artist’s illustration shows an electron orbiting an atomic nucleus, where the electron is a fundamental particle but the nucleus can be broken up into still smaller, more fundamental constituents.

Of course, this is not the way our Universe works, and that’s an extremely good thing. The Pauli Exclusion Principle is exactly what prevents this from occurring by that simple rule: you cannot put more than one identical fermion in the same quantum state.

Sure, the first electron can slide into the lowest-energy state: the 1s orbital. If you take a second electron and try to put it in there, however, it cannot have the same quantum numbers as the previous electron. Electrons, in addition to the quantum properties inherent to themselves (like mass, charge, lepton number, etc.) also have quantum properties that are specific to the bound state they’re in. When they’re bound to an atomic nucleus, that includes energy level, angular momentum, magnetic quantum number, and spin quantum number.

The electron energy states for the lowest possible energy configuration of a neutral oxygen atom. Because electrons are fermions, not bosons, they cannot all exist in the ground (1s) state, even at arbitrarily low temperatures. This is the physics that prevents any two fermions from occupying the same quantum state, and holds most objects up against gravitational collapse.

When you add a second electron, it can have the same spin but be oriented in the opposite direction, for an effective spin of -½. This way, you can fit two electrons into the 1s orbital. After that, it’s full, and you have to go to the next energy level (n = 2) to start adding a third electron. The 2s orbital (where l = 0, also) can hold an additional two electrons, and then you have to go to the 2p orbital, where l = 1 and you can have three magnetic quantum numbers: -1, 0, or +1, and each of those can hold electrons with spin of +½ or -½.

The each s orbital (red), each of the p orbitals (yellow), the d orbitals (blue) and the f orbitals (green) can contain only two electrons apiece: one spin up and one spin down in each one.

The Pauli Exclusion Principle — and the fact that we have the quantum numbers that we do in the Universe — is what gives each individual atom their own unique structure. As we add greater numbers of electrons to our atoms, we have to go to higher energy levels, greater angular momenta, and increasingly more complex orbitals to find homes for all of them. The energy levels work as follows:

The energy levels and electron wavefunctions that correspond to different states within a hydrogen atom, although the configurations are extremely similar for all atoms. The energy levels are quantized in multiples of Planck’s constant, but the sizes of the orbitals and atoms are determined by the ground-state energy and the electron’s mass. Additional effects may be subtle, but shift the energy levels in measurable, quantifiable fashions.

Each individual atom on the periodic table, under this vital quantum rule, will have a different electron configuration than every other element. Because it’s the properties of the electrons in the outermost shells that determine the physical and chemical properties of the element it’s a part of, each individual atom has its own unique sets of atomic, ionic, and molecular bonds that it’s capable of forming.

No two elements, no matter how similar, will be the same in terms of the structures they form. This is the root of why we have so many possibilities for how many different types of molecules and complex structures that we can form with just a few simple raw ingredients. Each new electron that we add has to have different quantum numbers than all the electrons before it, which alters how that atom will interact with everything else.

The way that atoms link up to form molecules, including organic molecules and biological processes, is only possible because of the Pauli exclusion rule that governs electrons.

The net result is that each individual atom offers a myriad of possibilities when combining with any other atom to form a chemical or biological compound. There is no limit to the possible combinations that atoms can come together in; while certain configurations are certainly more energetically favorable than others, a variety of energy conditions exist in nature, paving the way to form compounds that even the cleverest of humans would have difficulty imagining.

But the only reason that atoms behave this way, and that there are so many wondrous compounds that we can form by combining them, is that we cannot put an arbitrary number of electrons into the same quantum state. Electrons are fermions, and Pauli’s underappreciated quantum rule prevents any two identical fermions from having the same exact quantum numbers.

A white dwarf, a neutron star or even a strange quark star are all still made of fermions. The Pauli degeneracy pressure helps hold up all stellar remnants against gravitational collapse, preventing a black hole from forming.

If we didn’t have the Pauli Exclusion Principle to prevent multiple fermions from having the same quantum state, our Universe would be extremely different. Every atom would have almost identical properties to hydrogen, making the possible structures we could form extremely simplistic. White dwarf stars and neutron stars, held up in our Universe by the degeneracy pressure provided by the Pauli Exclusion Principle, would collapse into black holes. And, most horrifically, carbon-based organic compounds — the building blocks of all life as we know it — would be an impossibility for us.

The Pauli Exclusion Principle isn’t the first thing we think of when we think of the quantum rules that govern reality, but it should be. Without quantum uncertainty or wave-particle duality, our Universe would be different, but life could still exist. Without Pauli’s vital rule, however, hydrogen-like bonds would be as complex as it could get.