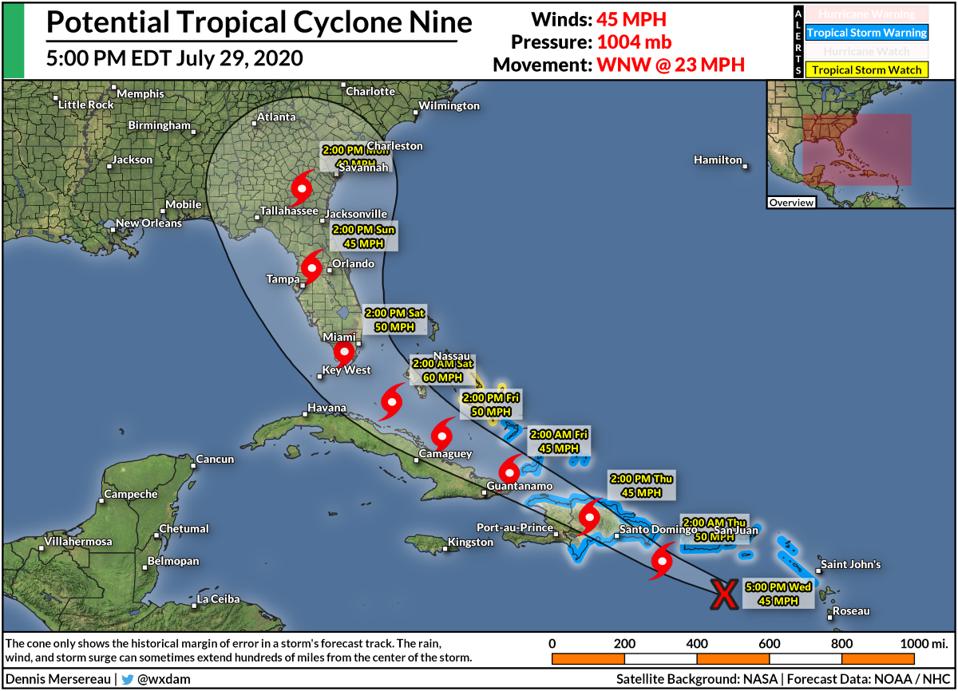 A tropical disturbance with a high likelihood of developing into this Atlantic hurricane season’s ninth named storm is trying to get its act together in the northern Caribbean. Regardless of development, the system—currently dubbed Potential Tropical Cyclone Nine—is already bringing tropical storm force winds and bursts of heavy rain to the Caribbean islands, and this will continue as the system moves over Hispaniola and toward The Bahamas later this week. Its potential impacts on the continental United States next week are still unclear.

The term “potential tropical cyclone” is a designation that the National Hurricane Center can assign to a tropical disturbance that hasn’t developed into an organized storm yet, but it’s close enough to land that watches and warnings are needed in anticipation of its eventual development. It’s essentially a bureaucratic workaround that lets forecasters issue tropical storm warnings before a tropical storm develops without having to break the rules. If it organizes into a tropical storm, its name will be Isaias (pronounced ees-ah-EE-ahs).

A tropical cyclone is a low-pressure system that has a closed circulation of winds at the surface, sustained by deep thunderstorm activity near the center of the storm. The disturbance in the Caribbean right now is still an open wave that has the same impacts as a weak tropical storm, but hasn’t met the scientific definition to be called one yet.

P.T.C. 9 looks better now than it did at this point on Tuesday. The disturbance has developed a broad circulation, as evidenced by the pinwheel-like banding that’s clearly seen on satellite imagery. The system is trying to develop sustained thunderstorm activity, which is necessary for a closed low-pressure center to develop at the surface. It’s not quite there but it’s getting close and it could become a tropical storm by Wednesday night.

It’s important to remember that the disturbance is still producing tropical storm(-like) conditions across a wide swath of the northern Caribbean this afternoon. Just like we always stress when disturbances affect the United States, impacts matter more than a name and title. Islands in the path of the disturbance/potential storm will experience a threat for flooding from heavy rain, as well as gusty winds that could bring down trees and power lines.

As for its future, there’s about as much working against the disturbance right now as there is working in its favor.

The first problem with this system’s forecast is that there’s no defined “system” to monitor yet. This is tricky since Florida could feel the effects of the system by this weekend. It’s hard to issue a forecast for a tropical storm that hasn’t formed yet. Centers of circulation have a tendency to jump around and form and dissipate in fits and starts, leading to (sometimes radical) changes in the storm’s current position and its ultimate track.

If a storm develops, it very much matters 1) where it develops, and 2) how strong and solid its core is. The core of a tropical cyclone acts like a sail that steers the cyclone along in the winds around the storm. Weak storms are driven by winds closer to the surface, while stronger, deeper storms are steered by the average direction of the wind throughout the entire column of the atmosphere around them. If P.T.C. 9 develops into Isaias, its strength will determine where it goes.

The second obstacle is Hispaniola. Weak storms have a tremendously difficult time surviving if the core of the system moves over Hispaniola, the mountainous island that’s home to Haiti and the Dominican Republic. The tall mountains in the center of the island can rip a budding storm to shreds, leaving behind a messy disturbance that often dissipates in its wake.

However, that’s not always the case. If the core of the storm (or bulk of the disturbance) misses the rough terrain on Hispaniola, the system can regenerate and begin to strengthen once it emerges over the southwestern Atlantic.

The third issue is that the NHC mentions that moderate wind shear will begin to buffet the system later this week. If it’s still a disorganized mess by then, it’ll be tough for the storm to get its act together in the presence of winds that can tear its thunderstorms apart. If the system manages to root itself and start building up a core, it might be able to survive wind shear well enough to reach the United States as a named storm.

Frustrating as it is, this is one of those situations where we can’t do much but watch and wait and prepare for its arrival. If you live in the southeastern United States, this is a great time to make sure you have the supplies to make it through a power outage (items like non-perishable food, water, batteries, flashlights) and alternate plans to stay home or take another route if roads are flooded during the storm’s rains. We’ll have a better idea on the system’s impacts to the United States once it clears Hispaniola on Thursday.

Earth is about to capture a minimoon, but there’s something odd about this one
Pandemic exacerbates NASA cybersecurity challenges
Researchers Working To Grow Algae For Biofuels In The Dark Using Solar Energy
Trump has ‘not been such an honest broker’ on Palestinian statehood, Saudi prince says
Silicon Valley IPOs are being celebrated in parking lots and conference rooms, as CEOs navigate pandemic and wildfire smoke