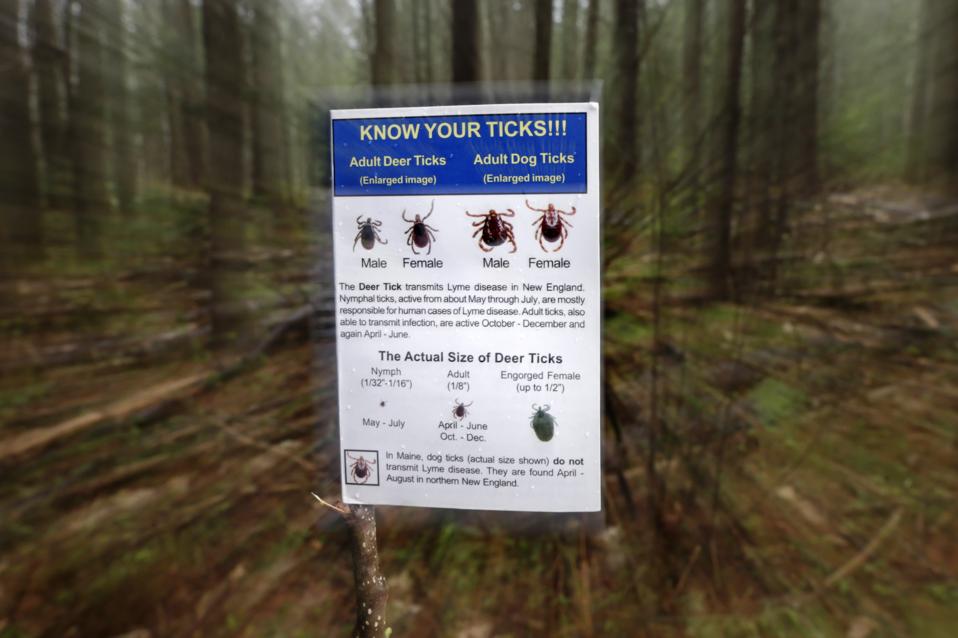 My fondest memories as a young child involve being outdoors running wild with my cousins. Doing cartwheels in the yard, swimming in the river, lake and ocean, or riding horses. But each summer night concluded with the same pre-bath ritual: tick check.

Now that might sound crazy to people raised in a city. But when you grow up on a farm, live near woods or on the east coast, it was as common a practice as brushing your teeth before bed. It’s also common for pet owners to check dogs after outdoor walks or city dwellers who live in areas that have mice – which carry ticks along with other diseases.

Unfortunately for me – and about 30,000 other Americans per year – one summer night someone missed a spot after a day of riding horses, and before I knew it I had Lyme disease.

For me, the disease was caught very early thanks to a remarkably visible bullseye rash on my leg that was so hot to the touch it indicated both the site of infection and diagnosis without much effort. Oral antibiotics were prescribed, and I was back to 100% within a few days. For tens of thousands of others, the symptoms may be minimal, with infection results as terrifying as brain and spinal cord inflammation. In fact, Lyme disease diagnoses were so bad in 2014 – with costs mounting over $1.3 Billion a year according to John’s Hopkins – that there was a scientific call for a “Manhattan Project” to combat the epidemic.

The most common tick-borne illness in the U.S., Lyme disease produces a wide range of symptoms ranging from fever and rash to arthritis and paralysis. According to the CDC, the states with the highest incidence include Connecticut, Delaware, Maine, New Hampshire, Vermont and Rhode Island. However, every state in the U.S. has reported cases on a yearly basis. Further, incidence reports from state health departments have prompted the National Institute of Allergy and Infectious Diseases (NIAID) to commit more than 20 years to prioritizing Lyme disease as a research topic.

But thanks to the rise of biotechnology, genome sequencing and precision medicine,discovery of new tools with which doctors can use to diagnose and treat patients has been accelerated. According to Dr. Brian Fallon, Director of the Lyme and Tick-Borne Diseases Research Center at the Columbia University Irving Medical Center, despite the vast challenges to finding a cure for this complex, debilitating disease, technological breakthroughs and the discovery of new microbes inside ticks has significantly helped researchers. Looking at tick microbes, “provides a starting point for the study of pathogenesis, vaccine development, and treatment.”

In a new study published in PLoS Pathogens, scientists at NIAID’s Rocky Mountain Laboratories concluded something similar, but with a new finding for the scientific world. The researchers found many different strains of Borrelia burgdorferi (the causative agent of Lyme disease) are stably maintained in the same local population of infected wild animals and ticks. The article concluded, “Once infected, people and animals are immune to re-infection by the same strain, but can become infected with a different B. burgdorferi strain.” What this means is that it was previously assumed once a person had Lyme disease they could not get it again. But instead, it turns out they cannot get the same strain they have, but they can still be infected with various other strains.

According to a report by Feng in 2014, thanks to FDA approved drug libraries, with the information obtained from rapid testing, researchers can quickly screen thousands of drugs to determine which agents have the strongest ability to kill the Borreliaspirochetes. Taken into account with the NIAID conclusions that an effective vaccine targeting strain-specific components of Lyme disease would need to be specifically designed to protect against multiple strains, and in the very near future we might be able to diagnose and treat various forms of Lyme disease within days. And at much lower costs than the current burden of disease and treatment plans require.

These are new and exciting reasons for the science community to be optimistic. “Through rapid genetic sequencing, scientists can identify many different strains of Borrelia burgdorferias well as new tick-borne microbial infections, such as Borrelia miyamotoi, Borrelia mayonii, and the Heartland virus,” says Dr. Fallon. Heand his co-author Jennifer Sotsky, M.D. (a fellow physician at Columbia University Medical Center)wrote a book called Conquering Lyme Disease: Science Bridges the Great Divide, explaining why there is much cause for hopefulness in their scientific circles. Although the disease is not well known in parts of the U.S., for those areas most affected, recent breakthroughs could mean significant differences in tens of thousands of lives and billions of dollars saved.