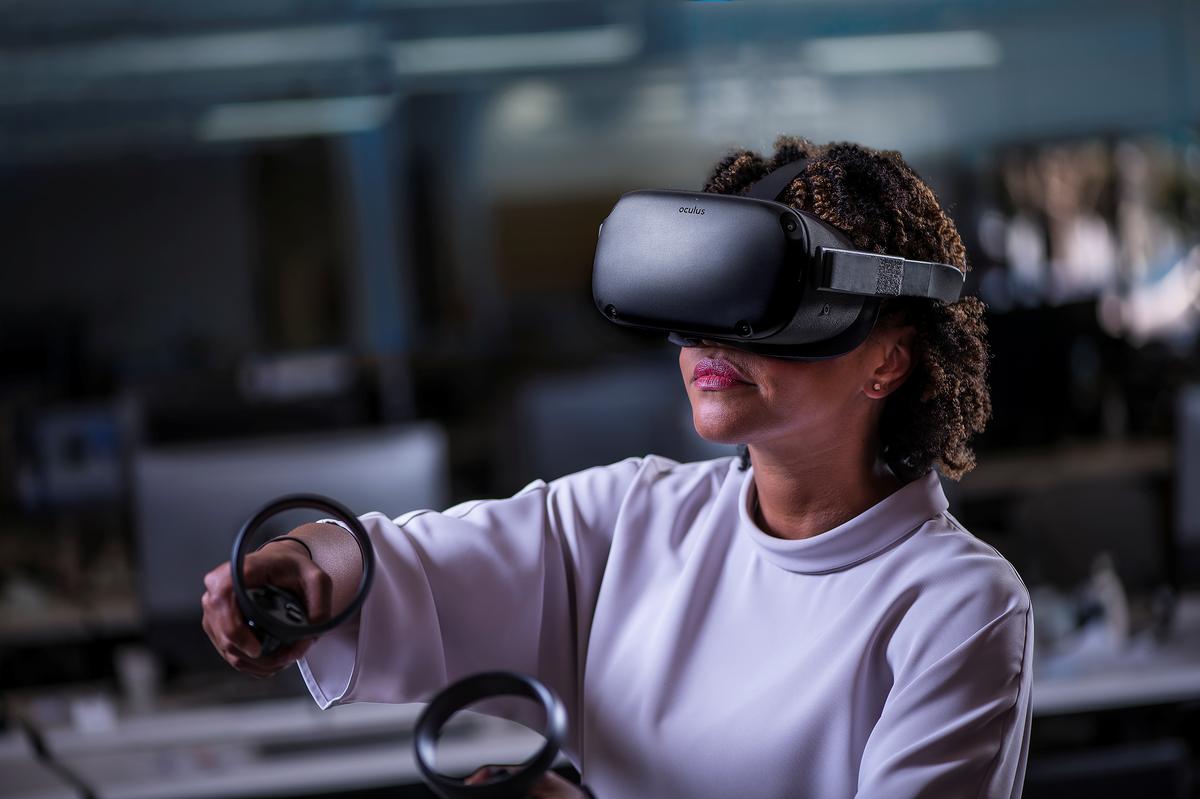 NEW YORK (Reuters) – The future of employee training involves no embarrassing role-playing in front of new colleagues or boring web modules which take an hour each to click through.

An Oculus Quest all-in-one VR device is shown in an undated 2019 photo released by Facebook January 22, 2020. Facebook/Handout via REUTERS

For the next wave in workplace learning, get ready to strap on a pair of virtual reality goggles. In ten minutes, the lesson is indelibly locked in your brain.

“This is what pilots have been doing for 50 years. You fly the plane without flying the plane,” said Derek Belch, founder and chief executive of Strivr, a virtual reality-based immersive-training provider based in Menlo Park, California.

“We can give that to any employee of any type.”

At Walmart, the two-year-old program hinges on using the 360-degree video experience of virtual reality to let employees see situations from different perspectives.

Now, VR headsets are in more than 4,500 stores, and some 800,000 associates have gone through training with them, said Andy Trainor, vice president of U.S. learning for Walmart.

The setup is not very glamorous or high-tech at the Walmart Academy in an industrial corner of Northern New Jersey. Headsets can be found in a small, sparse conference room at the end of a warren of corridors in the store room.

Once you put one on, though, you are in a zen-like middle world. A few turns on a spinning office chair, and you lose all sense of the room around you.

To teach what are known as “soft skills,” which involve qualities like communication, teamwork and leadership, Walmart’s empathy module begins from the perspective of the cashier. You see a busy checkout lane and customers lining up.

But then the perspective shifts, and you are suddenly the customer. You move through the back stories of why those particular people are upset:

A father who is with his young son is short of money to buy baby medicine.

A man is late to see his daughter’s performance in a show because his car broke down, and he needs to buy jumper cables.

A woman is flustered buying things her father needs because he just landed in the hospital.

“Cashiers can get very robotic and autonomous,” Trainor said. “Every single customer has a story, and there’s a reason they’re in the mood they are in.”

The message the company is hoping to pass along: You can help make the customer’s day better instead of worse.

A lot goes into crafting the scenarios to address the biggest pain points companies face. There are scripts and storyboards, and most work with third-party content creators, like Strivr, or Talespin, based in Culver City, California.

Many companies are currently using Oculus hardware, from Facebook, which comes in a few different varieties, some of which are more hands-free than others.

VR technology is advancing toward systems where you can measure biofeedback and voice responses, and also track hand and eye movements, said Isabel Tewes, who leads the virtual reality enterprise ecosystem for Facebook.

The simulation is complex. After you hang up on a trial call, you switch perspective to become the customer and see the impact of the transaction. In one instance, a customer asks for a check, but you have to ask the right questions to figure out that an electronic transfer would help the person more.

Farmers Insurance uses similar training for agents to practice difficult conversations with an avatar. Their pilot program should reach 500 representatives within the first quarter of 2020.

“It’s tied to confidence building,” said Jessica DeCanio, head of claims training for Farmers. “We want agents to be as confident as possible when they go into a home. The more opportunities to accelerate, the better.”

Measuring soft skills is not easy, but most companies find that the return on investment in virtual reality comes in the time saved and in employees who perform better.

“You have the ability to do it wrong,” Schouela said. “It’s one of those extra elements that technology gives you. It almost feels real.”