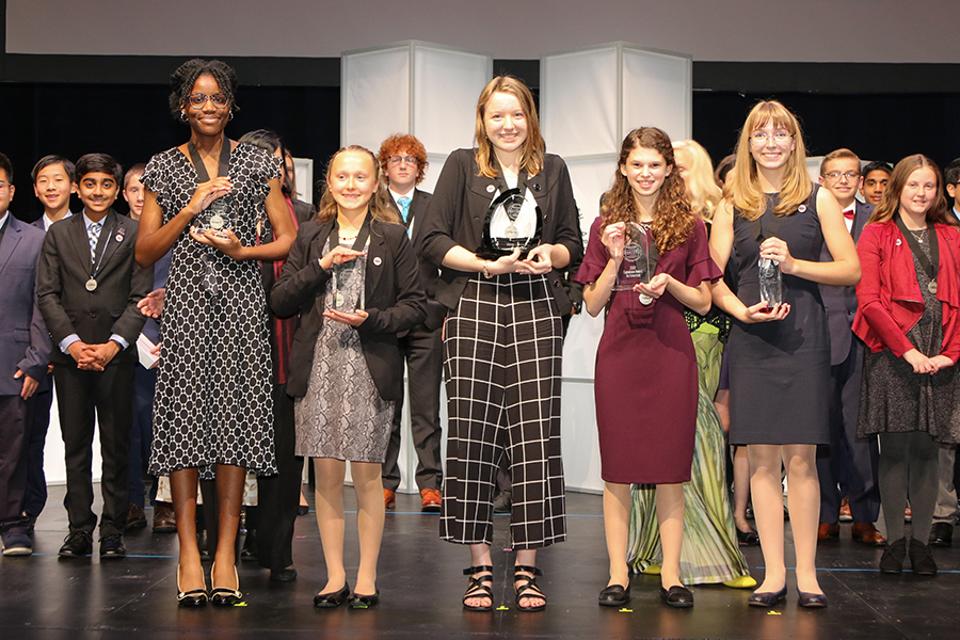 Something truly amazing has happened at this year’s Broadcom MASTERS National STEM Competition. Out of the 30 finalists chosen from across the country, the top five spots were all taken by girls, for the first time in the competition’s history.

When the finalists were chosen in September, out of a pool of 2,348 middle school students, it was the first time in the competition’s history that more girls than boys had been chosen. That was already fairly amazing but these young women were not out of surprises yet. They went a few steps further by winning all five of the top prizes. Those prizes carry a total of $65,000 in prize money and label their winners as some of the nation’s brightest middle school students.

Here are this year’s prizes and winners:

The $25,000 Samueli Foundation Prize for demonstrating a mastery of all STEM fields was awarded to Alaina Gassler, 14, from West Grove PA. Her project was titled Improving Automobile Safety by Removing Blind Spots. By mounting a webcam on the outside of the passenger side of the car she was able to capture a real-time image that is then projected on the inside of the A-pillar. She did face a challenge with the projector focusing on the inside of the car. The distance was just too close for the projector, but rather than give up Alaina used a 3-D printer to create a part that would help the camera focus. The end result is fairly stunning.

The $10,000 Lemelson Award for an invention that shows a promising solution to a real-world problem, was awarded to Rachel Bergey, 14, from Harleysville, PA. Her invention focuses on the problem of invasive spotted lanternflies harming maple trees in her home state of Pennsylvania. Her inspiration came after hearing that thousands of lanternflies had invaded her family’s maple trees. The trap she created captures the insects as they climb the tree trunks. As the insects ascend, they climb over a layer of foil that leads them to a smaller tunnel, guiding them into a bag of netting. Once in the netting the insects are trapped.

The $10,000 Marconi/Samueli Award for Innovation was awarded to Sidor Clare, 14, from Sandy, Utah for demonstrating vision and promise as a young innovator. Working with her partner, Kassie Holt, winner of the first place Technology Award, she created a building material that could one day be used on Mars. By mixing resin with simulated Martian soil, the girls created durable bricks that could be used to build structures on the red planet. “Our resin brick was so strong that we had to move to a concrete crusher to test it,” Clare said.

Building materials like these could really help the effort to put a human being on the surface of Mars. Getting to the planet is hard enough but building a reusable, long-lasting shelter would normally require us to send a lot of heavy materials to the planet. A process that can be difficult and cost a lot of time and fuel. By using the soil on the planet itself as a primary ingredient Sidor and Kassie hope that we will no longer have to deal with those costs.

The $10,000 Robert Wood Johnson Foundation Award for Health Advancement for showing promise in a health-related field went to Alexis MacAvoy, 14, from Hillsborough California. For her project, Alexis designed and synthesized an efficient, low-cost and eco-friendly, activated carbon from biowaste precursors to remove heavy metals from industrial wastewater. She got the idea for her project after learning about the harmful effects of mercury on the San Francisco Bay during the gold rush and how the majority of industrial wastewater isn’t filtered at all.

I find projects like this to be truly inspiring. To see young people take on the task of cleaning up industrial waste and helping make the world we live in cleaner and safer for everyone really brings a smile to my face.

The $10,000 STEM Talent Award was awarded to Lauren Ejiaga, 14, from New Orleans, Louisiana. Lauren is th only African-American female in the top five award winners. Her project Ozone Depletion: How It Affects Us, focused on how UV radiation affects plant life. Her research supplies the statistics that show the progression of deterioration that clearly shows the presence of climate change. The STEM Talent Award is given to the finalist that shows excellence in one or more of the STEM fields as well as the leadership and technical skills necessary to succeed in the STEM workforce. Lauren has shown these abilities and displayed a special concern for the future of our planet through addressing the climate crisis. I very much look forward to seeing what she will do in the future.

The awards did not stop there. There were also two Rising Stars Awards that was given to two of the youngest finalists. This award includes a trip to Anaheim California in May of 2020 where they will represent the United States at the Broadcom MASTERS International and be an official observer at International Science and Engineering Fair (ISEF) the world’s largest international high school fair competition.

There was also the Team Award for the group that best demonstrated their ability to work together to solve problems.

Last but not least was the Scott A. McGregor Leadership Award which is chosen by the finalists themselves. After being selected for their leadership ability this student represented their class as a speaker at the awards ceremony. This year David Anand had that honor.

It is simply amazing to me that the young women in this competition were able to take all of the top five prizes. This is the first time in the competition’s history that this has happened and it won’t be the last. Women leading the way and making their mark in STEM seem to be the way of the future. Take this competition for example; these young women didn’t just win, they dominated this competition.

This graph shows just how much of the total prize money was taken home by the women in this competition.

Every one of the 30 finalists in this competition has achieved something amazing. These young men and women worked hard to get this far. They all have the potential to have meaningful careers in STEM-related subjects and I can’t wait to see what they accomplish next.