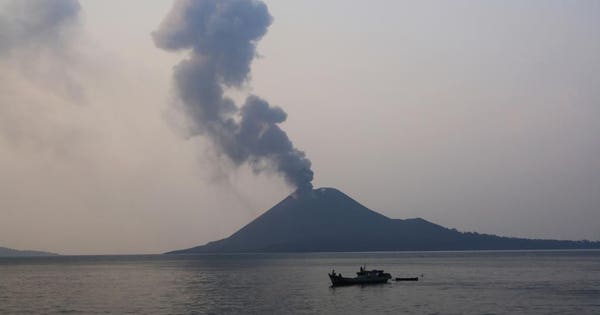 Fishing boat in the Sunda Strait at dusk with the smoking Anak Krakatau as backdrop; date unknown. (Getty Images)Getty

As reported by BBC News, a tsunami has just struck Indonesia’s Sunda Strait, which stretches between the islands of Java and Sumatra.

According to reports, it appears that an underwater landslide was triggered by volcanic activity at the infamous Krakatoa volcano – most likely Anak Krakatoa, the baby volcano growing in the heart of the older, larger edifice, which has been erupting for some time now. This landslide pushed away plenty of water, and a tsunami was generated.

Sutopo Purwo Nugroho, of Indonesia’s national disaster management authority (BNPB), has been tweeting out information relating to the event. At the time of writing, 165 people have been injured, and at least 20 people have died. It looks like plenty of buildings in the region have been destroyed, but so far it’s not clear exactly where the tsunami hit.

Normally when something like this happens, I turn to the United States Geological Survey (USGS) and their excellent post-earthquake reports, but as it so happens, the US government is partially shut down, which means none of their employees can update the system to explain what’s going on.

I’ll be keeping an eye on Indonesia’s meteorological and geophysics agency, the BMKG, and their alerts to get the most up-to-date information, but I’ll have to carefully translate their alerts into English first. As such, it’ll take me a bit longer to write an explainer here as to what happened. Standby!

At the moment, this is somewhat unclear. At the moment, all that’s clear is that a tsunami struck parts of the Sunda Strait, which connectes the Indian Ocean to the Java Sea. It appears to have taken place at 0700 local time, which was about 1900 on the US eastern seaboard. The Pandeglang, Serang and South Lampung regions have been hit, and at least 20 deaths have been reported so far.

A press release by Indonesia’s meteorological and geophysics agency, the BMKG, notes several tsunami heights per region. It looks like it got to its highest point in Serang, reaching 0.9 meters (roughly three feet); in other places, heights between 0.28 and 0.36 meters (0.92 to 1.18 feet) were registered. Per Nugroho, the tsunami occurred during high tide during a full moon, which perhaps boosted the tsunami height more than it otherwise would have been.

What Caused The Tsunami?

Unlike the end-of-September tsunami that killed thousands of Indonesians on the island of Sulawesi, this one wasn’t generated by an earthquake. In crude terms, earthquakes generate tsunamis when a fault slips, and a large chunk of rock manages to push a sizeable amount of water out of the way. This water travels across the bay, sea, or ocean, piles up near land, and rushes ashore.

Although the BMKG are still investigating the cause of the tsunami, the suspicion here is that it was triggered by Krakatoa’s undersea mischief, a volcano which also happens to reside in the Sunda Strait. In order to explain how this is possible, let’s go through a few things first.

Krakatoa, a cauldron-like volcanic system, is most well-known for its colossal eruption in August 1883. There’s a good rundown of the eruption here, courtesy of LiveScience, but the basics are these: several explosions essentially broke the roof on the monumental magma reservoir at the end of that month, allowing water to violently mix with the violently depressurizing magma. This generating not just a profound amount of volcanic debris, but four gigantic explosions heard as far away as Western Australia, the shockwaves of which travelled around the planet seven times.

Although no two volcanic eruptions are alike, and power isn’t everything, it is a good shorthand way of demonstrating how potentially destructive an eruption may be, so here it is: The prolific Krakatoan outburst was roughly 10 times as powerful as the 1980 cataclysm at Mount St. Helens.

Plenty were killed by various volcanic hazards, including extensive pyroclastic surges – gassier, cooler versions of pyroclastic flows – but the biggest single killer was the tsunami, which was generated as parts of the volcano, fractured by the eruption and no longer upheld by that buoyant magma, fell into the sea, creating a wall of water reaching heights of 36.6 meters (120 feet) in some places. In total, around 36,000 people died.

Volcanic landslides triggered tsunamis have happened plenty of times before. All you need is a large volume of rock falling into the ocean, and voilà, you have a moving body of water. This landslide can also occur underwater, if a flank of the volcano submerged by the sea – or lake – slips and crumbles and moves water in much the same way.

As landslides can often involve vast amounts of rock, and they can fall into relatively shallow bodies of water, the tsunamis they produce can be breathtakingly high, and are sometimes nicknamed megatsunamis. The world’s most potent megatsunami took place on July 9, 1958, when an earthquake-triggered landslide (or landslides) fell into Alaska’s Lituya Bay; the ensuing tsunami reached a maximum height of 524 metres (1,719 feet), per the USGS, but amazingly killed just two people in this very underpopulated area.

Per Nugroho, it seems that the likely cause of the Sunda Strait tsunami was an underwater landslide related to Krakatoa, but I can’t stress that this is still being investigated – this is just the running theory at present. At the same time, the tsunami is nothing like that produced during 1883, so don’t expect a comparably apocalyptic event here.

It should be noted that it’s not Krakatoa per se that’s potentially responsible here, but Anak Krakatoa, a juvenile volcano growing within the ruins of its infamous ancestor.

Anak Krakatoa, meaning Child of Krakatoa, rose out of the sea in 1927 as lava effused out at such a fast rate that the erosional capabilities of the water paled into insignificance. It’s been making headlines for a few months now as it flings out lava bombs and generates a fair bit of volcanic lightning. As it’s located far from any people, such activity is essentially harmless.

Saying that, it’s certainly capable of grander events. It appears a rather significant eruption took place at around the time of the tsunami, which – per the Darwin Volcanic Ash Advisory Centre – produced an ash cloud over 16.8 kilometres (about 55,000 feet) high. It’s possible, then, than a major blast at Anak Krakatoa dislodged enough of the island, triggered a landslide, and subsequently generated a tsunami.

It’s also possible that the tsunami was generated by a landslide unrelated to the volcano, of course. What seems to be certain, though, is that this tsunami was not produced as the result of a tectonic earthquake, a la Sulawesi.

This is a developing story, and will be updated as new information comes in.