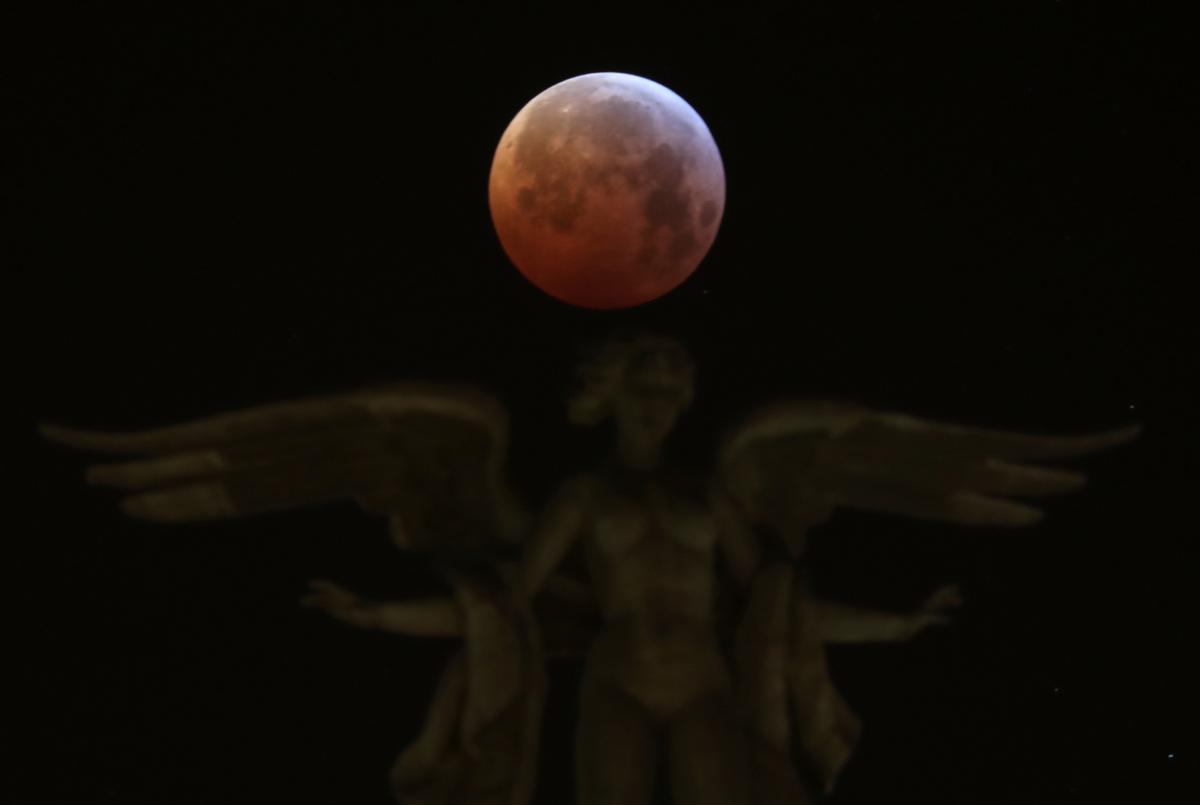 (Reuters) – Skywatchers howled at the moon at the Griffith Observatory in Los Angeles when the full lunar eclipse appeared shortly after 9 p.m. Pacific time on Sunday and our celestial neighbor was bathed reddish-orange during a Super Blood Wolf Moon.

The moon is seen over “Victoria Alada” statue on the top of Metropoli building during a total lunar eclipse, known as the “Super Blood Wolf Moon” in Madrid, Spain, January 21, 2019. REUTERS/Sergio Perez

“Amazing. As you can see, it’s a party atmosphere and everyone is just enjoying the spectacle,” said Rosalind Von Wendt from Los Angeles.

More than 1,500 people gathered at the observatory near the city’s famous Hollywood sign to watch the eclipse.

However, not everyone got to watch the cosmic show, with lunar eclipse parties canceled elsewhere due to a flash freeze across the central and northeastern United States. Icy roadways rather than cloudy skies were blamed by astronomers for spoiling the festivities.

In Los Angeles, where the weather was markedly warmer and skies cleared just in time, skywatchers were treated to a full spectacle of the Earth casting its shadow over the moon’s face.

“Oh it was fantastic, it was great,” said Brad Mortensen, from Philadelphia, Pa. “This was a great location. The observatory is always fun to visit so tonight when we heard about this we decided to come up.”

The moon did not vanish entirely during the total eclipse but, at its height, the entire lunar surface was bathed in a reddish-orange glow that gives rise to the “blood moon” description.

The reddish color is due to rays of sunlight passing through Earth’s dusty, polluted atmosphere as the moon falls into our planet’s shadow. The shorter, more pliable blue wavelengths of light are scattered outside the Earth’s shadow and the longer, less bendable red wavelengths are refracted toward the moon.

Adding to the visual effect is the fact that the eclipse occurred at a time when the moon reached a point in its orbit putting it close to Earth, an alignment called a supermoon.

It has also earned the name “wolf moon” because it appears in January, when wolves would howl in hunger outside villages early in U.S. history, according to The Farmers Almanac.

Sunday’s eclipse reached its maximum effect over Los Angeles shortly after 9 p.m. Pacific time (0500 GMT Monday), but not everyone on the West Coast had a clear view. It rained in San Francisco and San Diego had cloudy skies.

Astronomy buffs were urged to watch the eclipse livestreamed online at sites such as AstronomersWithoutBorders.org.

It seemed days earlier that cloudy skies would be the biggest threat to the cosmic fun, but it turned out a wet, wide-ranging snowstorm followed by a deep freeze on Sunday made driving and outdoor activities too hazardous.

“It’s not the snow or cloudy skies but, rather, the extreme cold and what we fear may be hazardous travel conditions,” said Pennsylvania’s Carbon County Environmental Center, which scrapped its party in Summit Hill, Pennsylvania, 54 miles (86 km) northwest of Allentown.

The eclipse was otherwise visible to the naked eye by anyone in the United States where skies were clear. That included Atlanta, Ga., where only the determined went outside in freezing temperatures to watch.

Unlike a solar eclipse, which requires eye protection to enjoy the view safely, no extra measures need to be taken for hazard-free lunar eclipse watching.

The next chance for Americans to see a total lunar eclipse is 2022.

The best viewing of the one-hour total eclipse was from North and South America, with as many as 2.8 billion people able to see it from the Western Hemisphere, Europe, West Africa and northernmost Russia.