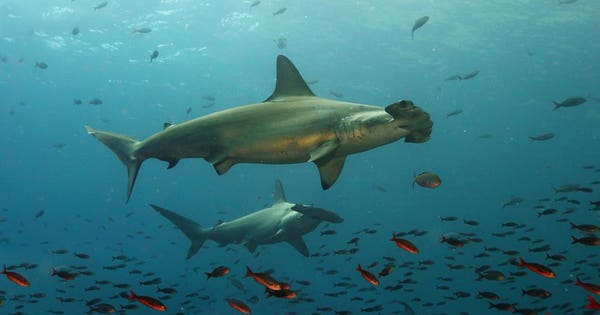 The mysteries of the sharks in Galápagos just got a little less mysterious thanks to a simple application you can download on your smartphone. Known as Sharkcount, the “super friendly” and free app was designed in Ecuador and developed in the United States has already produced 600 reports.

Sharkcount was created in the name of citizen science and encourages divers to report shark species they see including other information such as the location and how many were sighted, explains Eduardo Espinosa who is responsible for monitoring marine ecosystems of the Address of the Galápagos National Park. This, in turn, helps establish a baseline of information to mark long-term trends and helps define management measures. The first results from the app have already revealed the preferences of certain species towards specific islands during particular months of the year.

What is revolutionary about citizen science is that it allows anyone with access to this app (or any resources like it) to be a scientist! Data that was previously limited to what marine scientists observed during scientific expeditions or through video cameras and the expert eye of scientists is now being registered by divers from all around the world who come visit the “Enchanted Islands” of Ecuador. Yes, they were first called the “Enchanted Islands” when they were discovered by accident in 1535! Located hundreds of miles off the Pacific Coast of Ecuador, the archipelago is made up of 13 major islands, five medium islands, and about 215 islets. Home to various endemic species of marine species and exotic birds, UNESCO declared them Natural Heritage of Humanity in 1978.

Although diving in the Galápagos can be a chilly experience for some, it doesn’t stop the thousands of people who make the trek to this remote area to see a unique protected marine ecosystem that spans more than 130,000 square kilometers. Because Ecuador’s official language is Spanish, the app comes in that language as well as English, which allows for a wider audience to use it. After a year of tests developed by the Galápagos National Park, the San Francisco University of Quito (USFQ), and Galápagos Conservancy, the application produced 600 reports, adding to 300 obtained “in the last ten years,” comments Alex Hearn who is a researcher involved in the project.

So far it seems the scientists are appreciating that the application has added hundreds of additional eyes in the depths of the sea. Although sharks are better protected here than in some parts of the Pacific, enforcement of this protection can be hard in marine sanctuaries as big as the Galápagos. There are at least 58 species of elasmobranchs recorded in Galápagos waters, including around 30 species of sharks of which some are only found in the Galápagos. Therefore, it is essential that the artisanal and semi-industrial fishing fleets here have satellite systems that allow tracking and protective measures for sharks during their migrations in and out the reserve. This includes analyzing the bycatch of fleets in this area and ensuring that foreign vessels with no right to be in the marine reserve get in.

“They are a group of animals that have not changed much in almost half a million years,” which makes them, according to Hearn, “a window to our past, to understand the evolution of life on our planet.” It is fitting that evolution is brought up, as it was in the Galápagos where Charles Darwin’s discoveries developed his Theory of Evolution by Natural Selection. Sharks are long-living species with some individuals living more than thirty years. This makes sharks essential in helping maintain the balance of the food chain in this unique area, which still has many secrets.

One of the great unknowns is the arrival of female whale sharks (Rhincodon typus) to the Galápagos. “In Galápagos, we have females of 12 and 14 meters and they are not feeding, what are they doing here?” asks Hearn. Hearn says the observations and data show the females are in the marine reserve for a few days and then venture out to open water. Could they be pregnant? It’s an unknown that they intend to clear up with ultrasounds, but it’s “a long job, they still do not want to share their secrets,” he laughs.

And it is that without a baseline of information, neither Espinosa nor Hearn dare to describe the situation of the sharks in Galápagos, but agree that it is “one of the few places in the world” where large schools of several species are still seen of shark. With this app acting as their eyes when they aren’t in the water, the scientists of this special region hope they can unravel the mysteries the Enchanted Islands still keep.