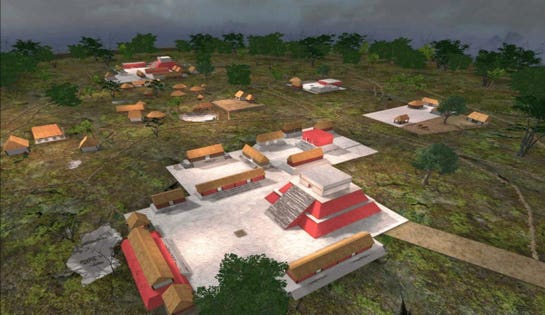 Archaeological field work typically involves lots of dirt, sun, and at least an insect or two, but archaeologist David R. Hixson of Hood College is opening new frontiers to bring archaeology into the world of virtual reality.  While he still keeps a trowel in his back pocket, Hixson now regularly works with drones, digital photography, photogrammetry and three-dimensional imaging software in his attempts to understand the human past. At the same time, the expansion of virtual reality technology is opening possibilities for the public to experience the ancient world in entirely new ways. The age of virtual archaeology has arrived!

Hixson’s traditional fieldwork has focused on the site of Chunchucmil. This ancient Maya city covers ten square kilometers and is estimated to have been home to more than 30,000 people during the 6th and 7th centuries AD. It is difficult to conceive what this ancient urban landscape looked like when inhabited. Visiting the site today, its former temples, houses and streets appear to be little more than piles of rubble. With such faded remnants, it is difficult to illustrate a complex urban environment using tradition static images, but while working at the site in early 2000s, Hixson realized that the Unreal Engine could open “a new avenue for archaeological illustration and communications.”

The urban center of the city of Chunchucmil as seen today.

The Unreal Engine is an open-source program developed by Epic Games to allow game developers to create immersive three-dimensional environments. While Epic offers the software for free to all users, the company actively encourages educators to make use of their platform. The executives at Epic were probably thinking of students in computer programming classes when they made this decision, but Hixson saw an opportunity for himself and his archaeology students.

Using the Unreal Engine 2, he created his first simulation of Chunchucmil to test the feasibility of the concept.  By going through the process, he found he had to consider many questions to create an accurate immersive virtual rendering of an ancient city. In a conference paper presented in 2007, Hixson noted that “in-depth research into site plans, architectural styles and excavations reports needed to be conducted before the first virtual stone was laid.” The results present a more flexible and engaging rendition of an archaeological site then one can find in the real world.

An aguada, or water source, located along side a housing group in the city of Chunchucmil

In his most recent work, Hixson is exploring how new developments in photogrammetry, a process that extracts three-dimension data from digital photographs, can enhance the process of rendering sites in virtual environments.  By bringing drones to the site of Chunchucmil, Hixson was able to create a three-dimension model of the archaeological site in a matter of weeks, when traditional mapping practices had taken years to cover the same territory. Due to the flexible nature of digital media, this model of Chunchucmil can also be layered with annotations that allow the “visitor” to the site to access more information if they so desire.

These methods can also be applied to small scale documentation in archaeology.  Using just 49 photographs taken with a smartphone, Hixson was able to construct a photogrammetic model of an archaeological excavation unit using the Altizure software platform.  Traditional illustration methods in archaeology would require a plethora of drawings to encode the variety information captured in this one interactive model.

A point cloud model and three-dimensional rendering of an archaeological test pit.

Other scholars and game developers have also noticed the potential that the ancient world and virtual reality offer. The blockbuster video game franchise Assassin’s Creed, created by Ubisoft, has invested in creating ever more realistic renderings of ancient spaces for gamers to explore. The last two titles in the franchise have taken players to lushly rendered virtual simulations of ancient Egypt and Greece, but these simulations raise questions for archaeologists.

In an examination of Assassin’s Creed: Origins, archaeologist Justin Reeve notes that while the high quality design found in these games is beautiful, it presents certain problems. “With [the Lighthouse of Alexandria’s] gorgeous façade and stunning central courtyard, the version of this building in Assassin’s Creed: Origins definitely has an air of authenticity, but the beauty of its architecture tends to obscure the unfortunate reality that no trace of the real thing has ever turned up in the material record.” This false sense of authenticity opens the door for players to walk away from these games with subtle and perhaps insidious misunderstandings of these ancient cultures.

Take for example the most recent expansion of Assassin’s Creed: Odyssey, which will give players the chance to visit the “lost continent” of Atlantis. In a recent class, I asked my students what they could tell me about this fabled lost continent. With some prodding small details began to emerge past simply an ancient city that had disappeared beneath the ocean. They had vague recollections of a city with fabulous technology powered by crystals imbued with energy and a population steeped in profound wisdom. In short, they had a picture of Atlantis far more heavily influenced by Disney’s Atlantis: The Lost Empire and Marvel’s Aquaman than the writings of the Greek philosopher Plato who invented the city.

The sunken city of Atlantis as imagined in the movie Aquaman.

This is the power of popular culture. It sticks with us for years to come, but also leaves us in doubt as to where original details came from. Archaeologist Andrew Reinhard, author of the book Archaeogaming, notes that video game producers are taking these problems seriously. He told me that Ubisoft and other video game developers have taken cues from archaeologists and are working to create gameplay modes that allow players to explore the virtual environment and learn more about the real history and archaeology their games are based on.

The potential of virtual reality for documenting archaeology sites is perhaps best exhibited by the work of Simon Che de Boer, founder of Reality Virtual, a New Zealand-based virtual reality research and development firm. Using photogrammetry software, Che de Boer was able to scan and create a high definition virtual simulation of the tomb of Nefertari, an ancient Egyptian queen. This simulation not only allows users to explore every nook and cranny of the tomb, but it is also layered with interactive components that allow users to learn more about what they are seeing.

The most exciting thing about Che de Boer’s simulation of Queen Nefertari’s tomb is that it can be downloaded for free on the website Steam. It is one thing to be able to create these beautiful simulations, but it is quite another to make them accessible to the public. This was a problem encountered in earlier experiments with digital simulation in archaeology, like the Digital Karnak Project directed by Diane Favro and Willeke Wendrich, which rendered great video tours of the site, but could not allow visitors to explore the site under their own whims. In his work on reconstructing Chunchucmil, Hixson noted that the advances presented by the Unreal Engine not only allow for scholarly collaboration in creating models, but also for an easily distributed interactive user experience.

Reinhard noted to me that this is the great power of archaeology in the context of virtual reality simulations and video games. “Archaeologists must be public storytellers, and by utilizing existing video game technologies such as the Unreal engine or Unity, we can meet the digital audience halfway.” With more archaeology themed video games on the horizon, such as Heaven’s Vault by Inkle Studios, and with Reality Virtual’s upcoming release of a simulation of the tomb of King Tutankhamun, we all will soon be able to learn more about the story of archaeology in a virtual land.

Using photogrammetry, techniques the original stucco sculptures from the facade of the Temple of the Inscriptions are here layered onto an Unreal Engine simulation