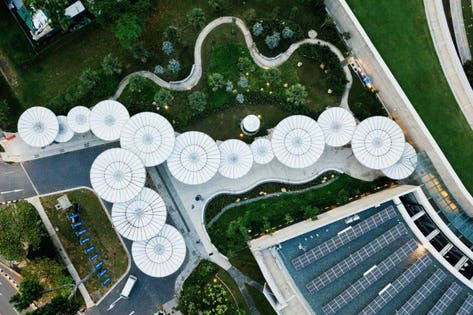 Over half of businesses in the United States have increased their commitment to renewable energy in response to reports warning of a worsening climate crisis . A study led by Deloitte has shed light on how businesses and consumers are reacting to climate change and the steps they have taken to reduce their carbon emissions. The major accounting firm identified the roadblocks facing consumer access to renewable energy, while noting that businesses have been increasingly ambitious with their environmental targets as they seek to reduce their impact.

Cities are starting to look more like this, with solar panels on rooftops, providing clean energy sources to buildings of companies and residential areas as well.

The study shows that although businesses are still driven to manage their resources efficiently from an economic standpoint, they have also become more engaged in sustainable development. Environmental considerations have become a more serious talking point among company decision-makers. Deloitte notes that since 2016, more businesses have embraced formal resource management goals and have increased the budget allocations to reach them. More companies than ever are now seeking to embrace renewable energy, lowering carbon emissions as well as producing less waste.

One of the major resource management goals that companies are striving to embrace is a diversification of their energy sources with 75% of businesses looking to procure a certain percentage of their electricity from renewables. Additionally, they have increased the sophistication of their energy management, helping them reduce overall power consumption. Deloitte says that businesses are now “upping their game” as they identify not only a range of cost-cutting opportunities associated to transitioning to a sustainable business model, but also become more aware of their environmental impacts and how to curb them.

Wind turbines offer a huge capability of generating electricity from the wind, and regions of the world are increasingly embracing this renewable and clean source and slowly walking away from coal and nuclear sources.

Since 2016, environmental goals have increased and have become more ambitious as companies build upon the success of their earlier environmental targets . As a result, businesses are finding it easier to reduce resource consumption and are increasingly tying energy objectives into employee goals as they look to become more efficient. Major energy providers such as ENGIE have also begun providing support to companies seeking both renewable power options and a framework to reduce their energy usage. This ensures that businesses are able to craft targets that are within their capabilities, while also maximizing their own efficiency.

Businesses in different sectors are embracing sustainable business models, and as a report by CDP has also determined, companies could stand to gain $2.1 trillion by embracing low-carbon technology. It has become more costly for businesses to ignore or forego greener resource options, and the market has incrementally shifted towards embracing environmental sustainability. 86% of businesses see environmental efforts as a necessary step towards staying financially competitive, 82% also believe it benefits their corporate image. However, companies are also responding to a shift in consumer demand.

See also: 77% Of People Want To Learn How To Live More Sustainably

Buildings like these are being built on countries like Singapore, to help produce more oxygen and clean the polluted air of contaminated industrial cities, showing sustainability is possible in every occasion.

See also: 77% Of People Want To Learn How To Live More Sustainably

The Deloitte study shows that 67% of consumers are concerned about their carbon footprint and climate change, and actively look for sources of renewable energy to power their homes. That being said, a lack of renewable energy options and the cost associated with installing solar panels have left consumers in what the study describes as “a holding pattern.” Energy management and renewable energy sources remain one of the largest consumer issues, as people are confronted with unequal levels of energy access and options. Of those who have not been offered a renewable power option by their utility company, almost half would be likely to choose it, with 31% willing to pay a premium for it.

As another study by Southern Cross University recently pointed out, consumers are looking for more environmental accountability from companies, and some are willing to pay extra for more sustainable products. 70% of companies report an increased consumer demand in environmentally-friendly solutions, and businesses have been listening. In response to consumer demands, 87% of companies have participated in available demand response programs and 81% of businesses actively promote their environmental works.

See also: Mini-Grids Are Ready To Change The World (Again)

With the price of renewable energy continuing to drop and a global shift towards sustainable development, a growing number of companies have embraced resource management goals and low-carbon tech. Deloitte concludes that businesses no longer have to make a choice between maximizing their bottom line or being environmentally-friendly. As businesses continue to build upon their environmental targets, a range of new technologies, services and options will arise that will benefit both companies and their consumers. The cost-effectiveness of running a green business model is a win-win for companies as they are able to combat climate change and maintain an edge over their competition. Being environmentally-friendly has become the latest business trend. On top of having a sound business model, companies embracing sustainable development are benefiting everyone.