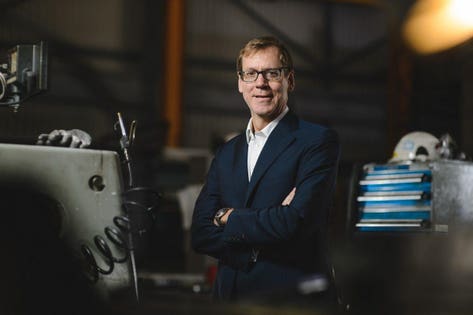 Dwindling U.K. interest in coal-fired power generation, once the country’s mainstay, has long been known. Reflective of that profound change in thinking is London-listed midcap utility outfit Drax Group (LON:DRX) and its Chief Executive Officer Will Gardiner.

Upon entering Gardiner’s office for an interview, the executive who was formerly the group’s finance chief, welcomes your correspondent with a beaming smile, firm handshake and a quip that really says it all: “Did you hear the U.K. went without coal generated power for three days in July. We loved it!”

For some that might seem strange. The company’s key asset – Drax Power Station in North Yorkshire, England – was premised on coal-fired power when it was opened in 1975. But for Gardiner and his investors, that’s history, as his outfit played a substantial part in enabling those three-days of coal-free power in the U.K., via its biomass power generators at that very same site.

“As a utility company we are undergoing profound changes. In 2017, we generated 65% of power from biomass, with the rest coming from coal. Our ultimate ambition is to get rid of all coal generating units by 2025, if not before.”

Gardiner says Drax has six units with each generating 645MW. “Four of these are already on biomass. It totals up to nearly 2.6GW of our power generating capacity that is coming from biomass. In terms of our generation this year, we will improve on last year and average above 70% in favor of biomass.

“Let alone three days, I’d say a coal-free [U.K.] summer is right around the corner. We are playing our part convinced by the value of going green. Additionally, a lot of coal that has come off the system, because investment has declined as it is no longer deemed environmentally sound. Furthermore, the U.K. has a very effective decarbonization policy been built around a very significant carbon tax – so coal is just not economic right now.”

From navigator to captain

Gardiner says switching tack from the CFO’s office to that of Group CEO, meant going from being a financial “navigator” to the “captain” of the corporate ship with a numbers-heavy perspective.

“Market projections suggest the UK will probably get 75% of its electricity from some combination of nuclear, solar and wind power by 2040. We do not deploy those generation methods, but the other 25% will still come from some large scale rotating plant. These would be needed to provide base load power when there is no wind or no sun, but also to provide system support at a time of great change. I think Drax is in a great position to do those things.”

To this effect, atop going incrementally green via biomass, the company is helping customers with efficiencies by assisting with the usage of “less energy”. It is also acting as an intermediary for small scale renewable energy generators by helping them sell their power into the system by buying from them via its retail arm.

“While Drax is very much about supporting the U.K.’s low-carbon journey, and coal is on its way out, not everything would be renewable; we could deploy natural gas as a bridging fuel.”

All about ‘insourcing’ and ventures stateside

A key strategic plank has been Drax’s policy of incremental “insourcing” of wood pellets required for biomass generation via its operations in the United States.

“Around five years ago, we decided to build several of our own pellet plants [stateside]. We’ve built two pellet plants and bought a third. Currently we have a capacity of 1.5 million tons of wood pellets per year, all in the southeast of the U.S. in Louisiana and Mississippi. For reference, we use 7 million tons of wood pellets per year, and about 60% of those come from the U.S. from our own facilities and elsewhere.

“So the U.S. is a massively important piece of our supply base. Of course, there is a big foreign exchange risk that we have to manage. So via a 5-year rolling hedging program, we buy forward all the dollars that we need to buy those pellets.”

Gardiner says its shipments constitute a headline grabbing contribution to U.K.-U.S. bilateral trade, as wood pellets constitute the largest agricultural export from the states to the UK.

“What’s more, such importation is crucial in our bid to bring biomass costs down, so that by 2027 it is viable without subsidy. It cost £75 ($97) per MWh today, and we need to get it to about £50. The objective would be achieved via various means, including bringing the costs of wood pellets down. So having our own supply of pellets gives us a great opportunity to bring those costs down.”

In such a setting, unforeseen problems provide currency to short-sellers. Right at the start of the trading year, a rail loading outage hit deliveries of pellets that led to lower power generation at two of Drax’s biomass units. It was followed by another outage at one of its biomass units in February.

No time for short-sellers

As a result, Drax left its full-year earnings forecast unchanged on July 24 after having posted a 16% drop in first-half earnings for the six months to 30 June to £102 million, down from £121 million for the same period in 2017. The company’s share price took a nosedive, only to recover in the weeks that followed.

However, Drax, which accounts for 6% of total power generated in the U.K., raised its interim dividend to £22.4 million, or 5.6p per share, from 4.9p last year, and Gardiner, a former investment banker, says he has little time for short-sellers, as his company has “compelling corporate story” to offer to the market.

“We remain focused on safe and efficient operations, returns to shareholders and expect to declare a full-year dividend of £56 million for 2018. My experience contrary to some other CEOs, who have commented on short-sellers, is that if you have a compelling story, and deliver to the market what it expects you to deliver over the long-term, then it responds generally in a way that makes sense and matches the positive story.

“The share price July drop that was noted was a very short-term reaction. It was down on the day but it is currently well north of where it was when we made the announcement. People have now digested our latest results more completely. They are seeing that we are delivering earnings out of our pellet business, earnings out of our retail business and generation business is doing well, in spite of those two unplanned outages.

“It is our job to make the market understand what we are doing, what we are about. I am not in the business of worrying about short-sellers.”

The company currently has a market capitalization of £1.52 billion, and Gardiner says its asset mix is very different from a lot of its peers. “We don’t have any regulated return type of assets where we have set a return. We have set a dividend policy which is to pay a sustainable and growing dividend, while at the same time maintaining our credit rating and capitalizing on the opportunities in front of us.

“This stance has been in place for a year now and our shareholders have been quite supportive of that. Of course, in our sector, there is always pressure to ensure you have the right amount of cash return.”

On new horizons and beer shortages

Gardiner says Drax’s philosophy of moving away from coal to biomass is not down to any sort of shareholder pressure. Quite the contrary, its growing green credentials are attracting a “whole bunch of investors” who recognize the value in a low carbon pathway.

“I also do think there are economic risks around stranded assets that existing shareholders are aware of, and they applaud our move to biomass and a zero-coal future.”

Investing in its pellet business, retail offering and generation capacity will continue at pace over the next 2 to 3 fiscal years and carbon capture and storage (CCS) is firmly in the company’s plans. “If you think about CCS, there are two parts to this – can you capture carbon at a competitive cost and the infrastructure that’s needed [and we have a trial to effectively look at different ways of tackling that problem]. Our pilot is aimed at capturing 1 ton a day.”

So much so that Drax Group offered carbon dioxide to the U.K. brewing industry when a shortage of the gas threatened to disrupt the country’s summer beer supplies causing much light-hearted alarm during England’s spectacular run to the 2018 Soccer World Cup final.

Grappling with Industry 4.0 and Brexit

In step with Industry 4.0, Drax uses digital kits and sensors that are rapidly becoming commonplace at energy facilities, terminals and plants. “I think the most interesting area where digital concepts would be applied would be in smart-meters. Right now our relationship with our customers is very linear, we sell them energy for a charge and there is a billing and customer service offering as expected.

“Smart-meters give us real time information usage, leading to a real time ability to change tariffs. That puts us in a position to offer a richer preposition to customers, efficiencies, time-shifting of usage, and all sorts of possibilities to make that relationship more powerful. However, it’s my opinion that the energy industry is well behind in the Industry 4.0 stakes compared to other sectors, which also creates a big investment opportunity.”

And for a group in the business of making big long-term bets, policy uncertainty created by the Brexit vote and looming danger of global trade wars is troubling.

“The policy environment at the moment – to put it mildly – is not the best, but I believe Brexit will happen, even if the jury is still out on the possibility of a global trade war. What relationship the U.K. would have with European Union in terms of the energy market, including the carbon tax policy is quite unclear and that is not helpful.

“My view is that the trade wars and Brexit are not economically rational. They are based, and driven by other factors which may be legitimate but not economical. As a society we have left too many people behind in a world of rapid change. That’s the problem we need to solve, and I doubt it would be solved by Brexit or trade wars. Re-skilling of the workforce in an evolving fast moving digital economy is what’s needed and that’s what we are doing as a company in our own way.”

A journey of transformation

If transformation is the name of the game, then Gardiner is well geared up for it. “All three businesses I have been involved with at board level presented significant opportunities and challenges. At CSR [acquired by Qualcomm in 2015], I worked at a strong but small player in semiconductors, and we switched from just selling semiconductors for smartphone companies to the voice and music market, thereby bringing about a very successful transformation of the business.

“For me, Drax is in quite a similar place. We’re transforming from coal-fired power generation to biomass. We have vibrant businesses under the corporate umbrella, and now the story is about the significant amount of cash that we should generate in the next 10 years, and where should we invest both organically or via acquisitions.

“Being a company like Drax, one that’s smaller than the big guys but bigger than the small guys and somewhere in the nimble middle, responding to renewable challenge, playing our part mitigating the effects of climate change, and partaking in the Industry 4.0 revolution are all challenges that I relish.”

Are humans still evolving? Scientists weigh in
How the giant stinging tree of Australia can inflict months of agony
China is quietly preparing for November launch of the Chang’e-5 lunar sample return mission
The ARM Nvidia Deal – A View From A Cambridge Founder Who Has Benefitted From ARM’s Success
Glorious new Hubble photo showcases Jupiter’s stormy side